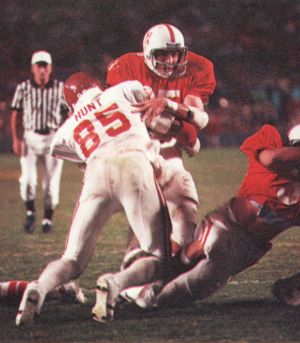 Rick Berns rushed for 99 yards on 19 carries before leaving the game in the fourth quarter with an injury. | Courtesy of Nebraska Athletics

In a game between the 1978 Big 8 champions — Nebraska had defeated Oklahoma 17-14 a month earlier — Oklahoma this time came out on top and withstood a furious Nebraska fourth-quarter rally to defeat the Huskers, 31-24, in the Orange Bowl.

At the start of the fourth quarter, the Sooners were comfortably ahead 31-10, when the Huskers’ charge began. Nebraska drove 78 yards in 15 plays, when senior I-back Rick Berns scored from the one yard line, with 9:12 left. Billy Todd’s extra point was good, and Nebraska trailed 31-17.

On Oklahoma’s next possession, Sooner senior quarterback Thomas Lott fumbled on the Oklahoma 42-yard line and the ball was recovered by Nebraska sophomore tackle David Clark, with 8:07 left.

The Huskers then drove 35 yards in eight plays — aided by an opening 15-yard gallop by junior I-back I.M. Hipp. Seven yards from the Sooner goal, Nebraska was faced with a fourth and one. Sophomore I-back Craig Johnson tried the middle but was stopped by OU linebacker George Cumby for no gain with 4:24 left. Time was beginning to run out.

The Cornhuskers had one more opportunity to score and put it to good use. Starting at the Nebraska 42 yard line with 2:21 remaining following a Sooner punt, the Cornhuskers drove 58 yards in 10 plays and scored on a one-yard toss from Sorley to Miller with :03 left. 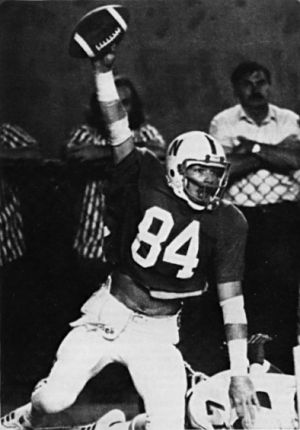