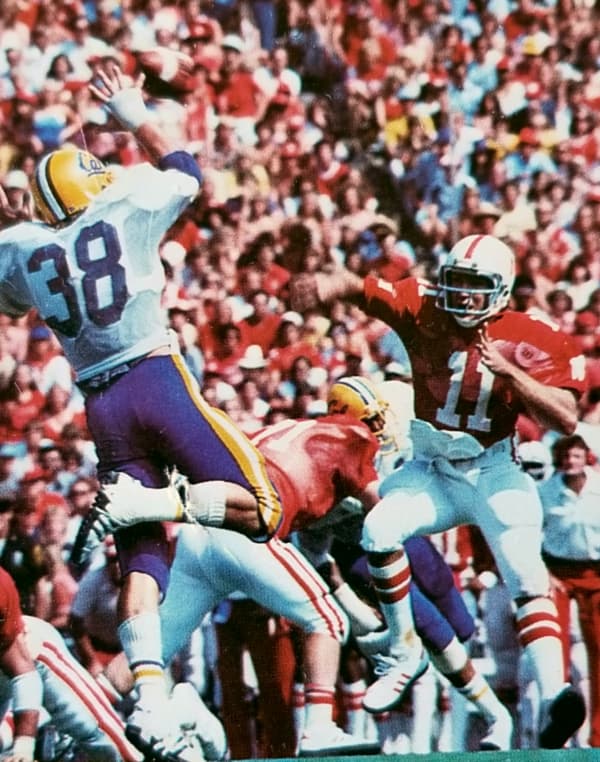 Huskers rebound with win over Bears

The Cornhuskers came back from an season-opening loss to Alabama to beat the California Golden Bears 36-26.

The Golden Bears drew first blood when the Huskers fumbled the ball on their own 20-yard line and California recovered. A 12-yard pass from Rich Campbell to Floyd Eddings put the Bears on top, 7-0.

The Cornhuskers tied it up before halftime with some nifty ball handling, quarterback Tom Sorley pitched to I.M. Hipp who in turn pitched back to Sorley, who then passed 57 yards to wingback Kenny Brown. Nebraska scored five plays later with Sorley sneaking over from the one.

The two clubs traded touchdowns in the third quarter which set up the explosive final period in which 34 points were scored. Nebraska scored with only 1:38 gone in the final frame when Sorley hit wingback Maurice McCloney with a 32-yard touchdown strike. The Huskers came right back in the next 45 seconds to score again. NU defensive end Laurence Cole recovered a California fumble in the end zone to make it 29-14 as Nebraska went for two on the point after.

The Huskers scored once more on fullback Andra Franklin’s run and California added two more tallies to make the final 36-26.

Nebraska was led by Hipp’s 154 yards on the ground and Sorley’s 190 yards through the air.