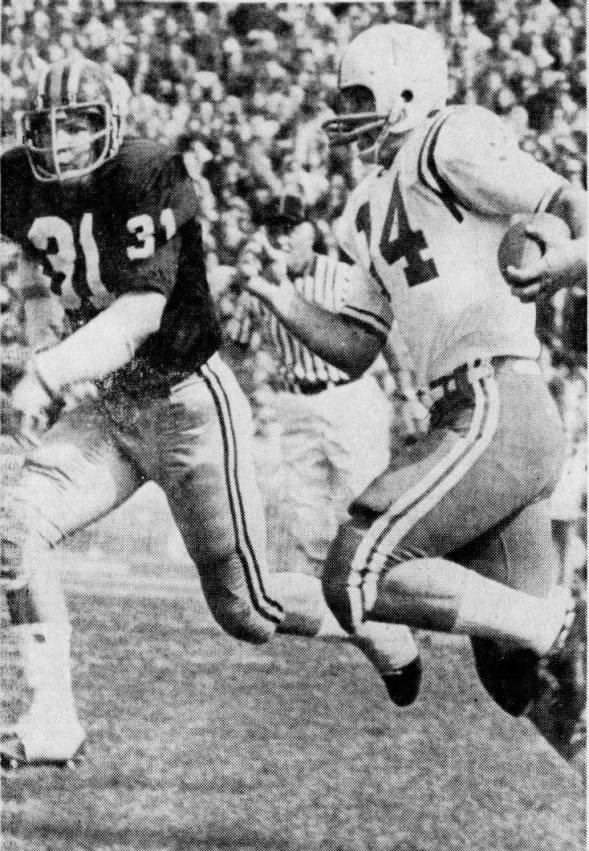 Jerry Tagge picks up 25 yards on a keeper with Mike McKee in pursuit. · Louisville Courier-Journal · Newspapers.com

Missouri shut out Nebraska in the first quarter — something no one else could do — but the Cornhuskers caught fire for a 36-0 shutout victory before a sellout crowd of 61,200.

Early in the second quarter, the Huskers drove 67 yards in 14 plays to break the deadlock, with Jeff Kinney getting the TD. Midway through the quarter, Monte Johnson blocked a Tiger quick kick for a safety, and the Huskers added a 55-yard drive and another Kinney TD before halftime for a 16-0 lead.

Nebraska made it 30-0 after three quarters, thanks to a six-play, 72-yard drive climaxed by a 28-yard Jerry Tagge to Johnny Rodgers pass, and an 80-yard drive which saw Tagge score from the one. Husker reserves added a final TD in the fourth quarter.

It was an awesome showing by the Huskers. They rushed for 334 yards, passed for 269 and had a total offense of 603 yards. Meanwhile, the Black Shirts were tremendous, holding Missouri to only nine yards rushing and 104 yards passing for a total of 113 yards.

It was Nebraska’s 24th game without defeat and 15th straight victory.