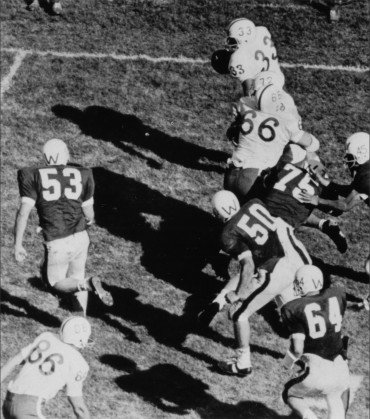 Coach Bob Devaney maintained his record of never losing to a Big Ten team intact as the Nebraska Cornhuskers took a 31-3 decision before 52,428 fans.

The Huskers lead early, 3-0, on Larry Wachholtz’s 27-yard field goal, then shared a 3-3 tie late in the first quarter on a 33-yard boot by Tom Schinke.

Nebraska went ahead to stay, 10-3, late in the second quarter after a Badger fumble. The Huskers stomped 64 yards in only seven plays, with Ben Gregory going the last nine.

All-America Wayne Meylan applied the cruncher early in the third quarter as he blocked a Badger punt and fell on it in the end zone for a TD and a 17-7 lead. The next time Nebraska got the ball, the Huskers went 59 yards in eight plays, Harry Wilson scoring from the 11.

Husker reserves then took over and followed a pass theft with a 37-yard drive, Paul Critchlow getting the final TD on a short plunge.

NOTES: Wisconsin committed seven turnovers. … Nebraska linebacker Barry Alvarez, who years later would become Wisconsin’s Hall of Fame coach, returned an interception 25 yards before being brought down from behind by a Wisconsin offensive lineman.