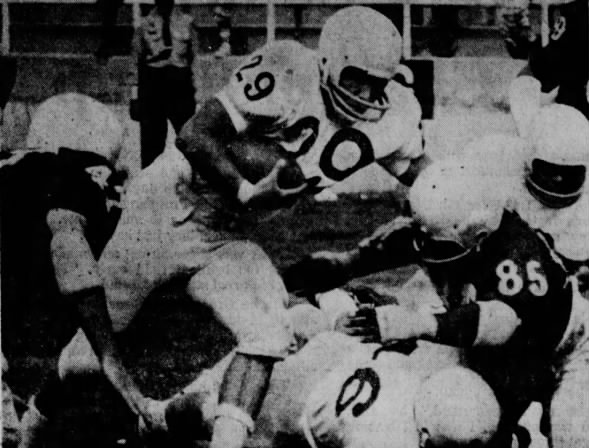 A stifling defensive performance and a go-ahead 99-yard drive into a stiff wind highlighted the Whites’ 28-10 victory over the Reds in Nebraska’s annual spring game.

The Reds held a 10-7 lead in the third quarter and seemed poised to pad their advantage, but an interception by Marv Mueller ended the threat and gave the Whites the ball at their own one-foot line. Using a mix of runs and passes, quarterback Al Fierro drove the Whites the length of the field for a touchdown and a lead they would not relinquish.

Two more touchdowns in the fourth quarter, one of them on a 31-yard pass from Fierro to Sherwin Jarmon, gave the Whites their final 28-10 advantage.

Fierro’s decision-making and passing (9 of 19 for 121 yards) earned the praise of coach Bob Devaney, who noted that several of his passes were dropped.

The Omaha World-Herald reported that attendance at Seacrest Field was “generously estimated” at 8,500.