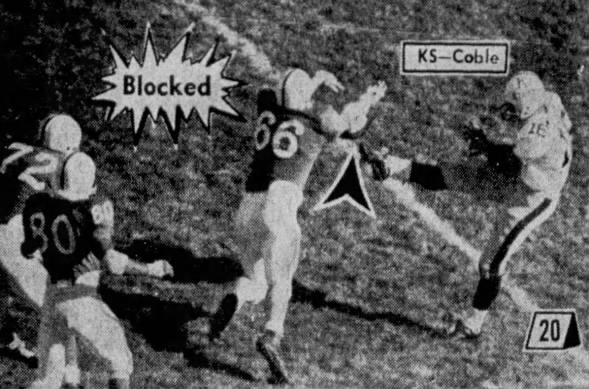 Nebraska Homecoming fans — a record 64,108 — saw the Cornhuskers jump out to a 14-0 lead, then fight off the determined Kansas State Wildcats through the last half before posting a 21-10 win.

Win No. 5 didn’t come easily as Doug Weaver’s Wildcats pulled up 14-10 with 9:31 left. But after that score the Scarlets pounded out a 68-yard drive in only nine plays to erase any KSU upset hopes.

Nebraska drove 80 yards — Pete Tatman got the last four — for a TD with 3:55 left in the first quarter, then called on Wayne Meylan for a cushion. Late in the second period, the All America middle guard rushed through to block a Wildcat punt. He chased down the ball and recovered it in the end zone for his second TD of the season.

K-State kicked a field goal early in the third quarter and went on a passing spree — a 47-yarder from Bill Nossek to Dave Jones was the big play — to pull up 14-10.

Ben Gregory’s four-yard touchdown run with a minute and a half remaining iced the victory for the Huskers. The 68-yard scoring march was set up by Larry Wachholtz’s interception of a Nossek pass.