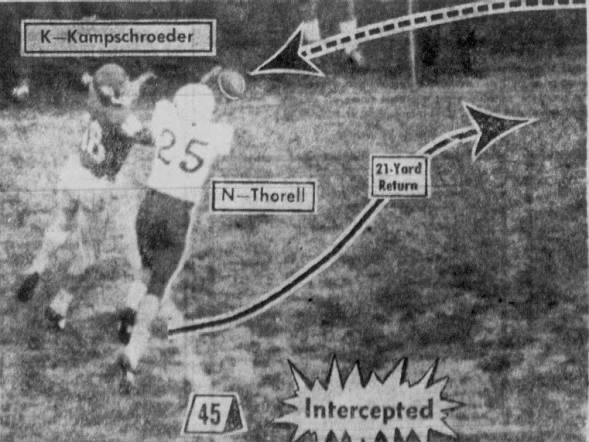 Nebraska bombed Kansas early, then settled back for a 24-13 win that was more decisive than the score.

With 45,500 fans on hand, the Huskers started moving late in the first quarter and wound up with three second-quarter touchdowns and an 18-0 halftime lead.

Kansas got a third-quarter TD after a NU fumble gave the Jayhawks a break at the Husker 36. Then Nebraska opened the gap to 24-7 before KU sent Husker subs reeling with a last second tally off a full-scale aerial attack.

Nebraska capped a 69-yard drive with Ben Gregory scoring from the three with 13:55 left in the first half. With 4:51 left, Bob Churchich ran 27 yards for a second Husker TD, and on the play following the subsequent kickoff, Dennis Thorell intercepted a KU pass and tore back to the 24. Six plays later, Harry Wilson scored for an 18-0 lead with 2:28 left in the half.

KU’s Bill Fenton tossed a 25-yard TD pass to Junior Riggins to get the Jayhawks on the board in the third quarter.

The Scarlets retaliated in the final quarter with a fine drive, scoring on a Churchich-to-Wilson nine yard pass.

Fenton passed the Jayhawks 65 yards in four plays, the TD pass coming after time had run out, against NU reserves.