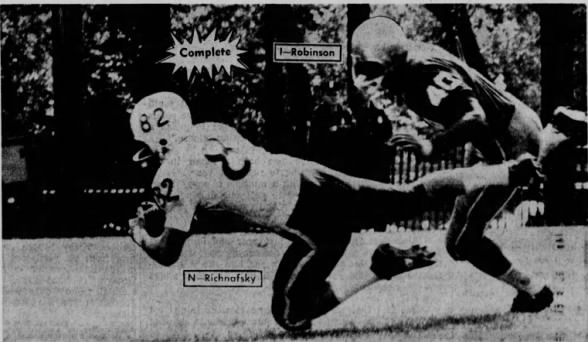 Dennis Richnafsky dives for one of his eight pass receptions. · Lincoln Star · Newspapers.com

Harry Wilson’s tremendous 36-yard burst through the Iowa State Cyclones saved Nebraska from an onrushing tie, just 3:45 before the final gun, and gave the Huskers a 12-6 win for No. 3 before a record crowd of 28,000.

Iowa State tied it in the second quarter when Don Graves picked off a Bob Churchich pass and raced 16 yards to score.

Carel Stith’s fumble recovery at the ISU 46 late in the fourth quarter gave Nebraska a chance for victory. A 10-yard Churchich-to-Dennis Richnafsky pass and a key fourth-down plunge by Paul Critchlow gave the Huskers a first down at the 36.

Wilson then shot through left tackle, got hit three times — he shook off two and broke the third tackle — before ripping into the clear for the winning TD.