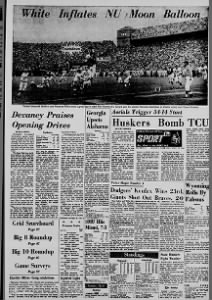 All America end Freeman White caught two first-quarter touchdown passes and went on to set a Nebraska record with eight receptions as the Nebraska Cornhuskers opened the 1965 season with a 34-14 win over Texas Christian University.

Bobby Churchich tossed TD strikes of 27 and 12 yards to White, giving NU a 14-0 quarter lead before 53,650 fans who had come to survey the No. 1-ranked Huskers’ debut. Churchich started fast, completing his first six pass attempts.

Billy Johnson’s 50-yard pass interception for a TD gave the Huskers a 21-7 halftime lead, and Nebraska put together an 80-yard drive in the third quarter and outscored the young but aggressive Horned Frogs 13-7 in the final half.