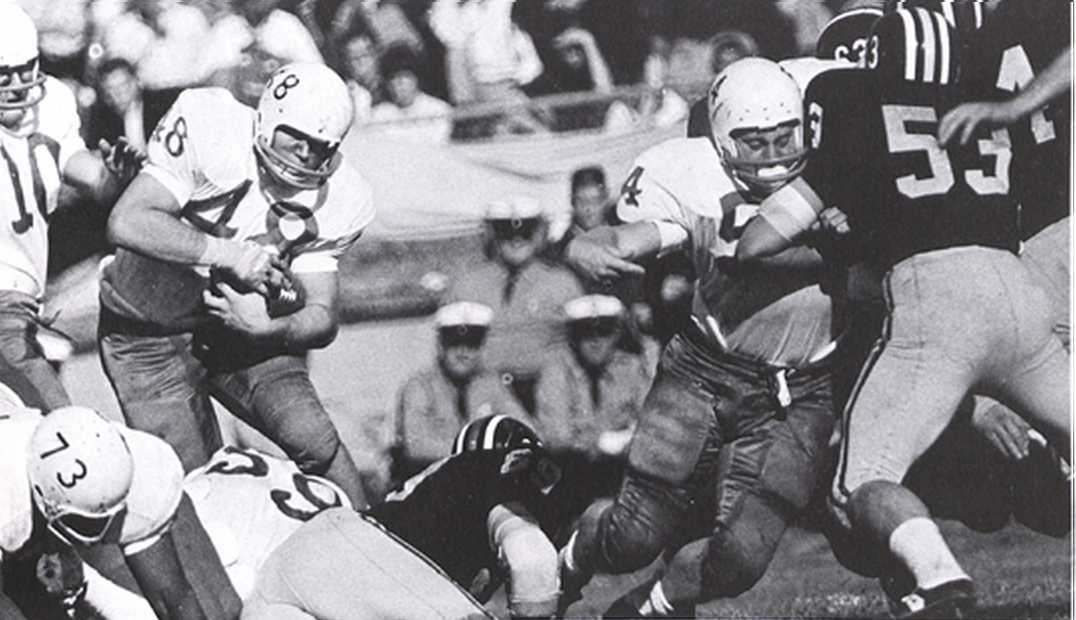 Pete Tatman bulls over for a touchdown as Kelly Petersen (54) helps clear the way.

Huskers rally from 14 down, edge Tigers

Missouri was supposed to be Nebraska’s biggest test and probable Big 8 stumbling block, and the Tigers proved the experts right on one count and almost right on the other, before the Huskers pulled out a 16-14 win.

With Gary Lane running wild, the Tigers had 57,206 Homecoming fans screaming in delight by tearing to a 14-0 first quarter lead before the Huskers knew what hit them.

But when they awoke, the Cornhuskers proved their championship caliber by staging one of the great NU comebacks — recalling memories of North Carolina State in 1962, Oklahoma in 1960, Minnesota in 1964 and Iowa State in 1940.

It took a 37-yard run by Lighthorse Harry Wilson to shock the Huskers into action. Pete Tatman bulled over from the one and NU was back in the game, 14-7, with 5:28 gone in the second quarter.

Next Fred Duda took the Huskers on an 89-yard scoring drive, and fooled the Tigers to a man on a fourth-down play at the Missouri 39. Duda sent Solich into the middle where Tigers assembled en masse. But Duda had kept the ball, circled his left end and raced to the one, from where Tatman again plowed over. That made it 14-13, but kicking ace Larry Wachholtz missed the point, and Nebraska still had to pull it out.

While Nebraska’s ground attack generated huge chunks of yardage in the second half, the Huskers couldn’t score. But the Big Red defense was superb, holding the Tigers to 45 yards rushing and 16 yards passing and enabling NU to stay within range.

Midway in the final quarter, Duda started the Huskers on a drive that carried to the Tiger 17, aided by a penalty, and with a fourth down at the 9, Wachholtz kicked a field goal with 5:56 left.

The Huskers fought off a desperate rally and sacked up win No. 7.