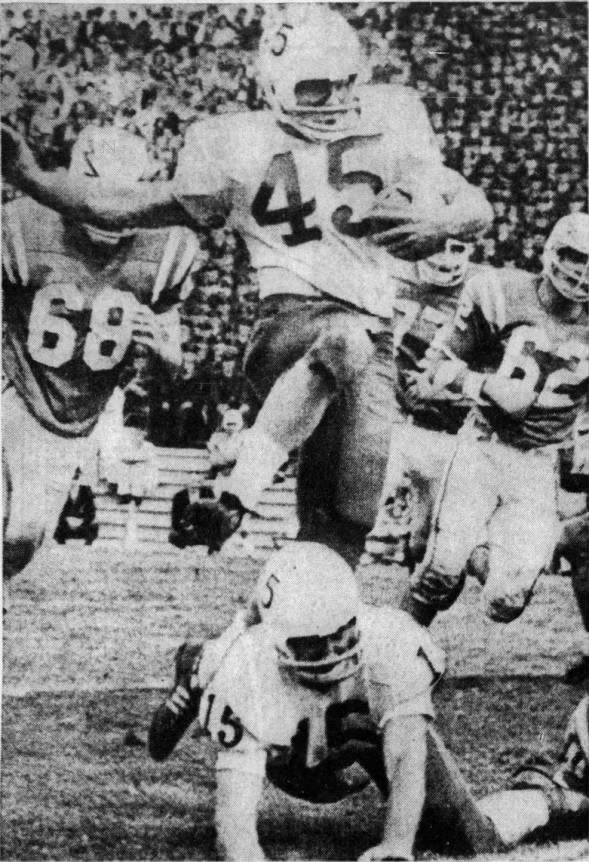 Frank Solich tore 80 yards to score on the first play of the game and Nebraska took a 21-0 first-quarter lead, then had to scrap furiously to down a fired-up Air Force team, 27-17, for win No. 2.

Following Solich’s stunner, Harry Wilson posted a 41-yard run to set up a 11-yard TD smash by Ron Kirkland, and Solich logged a 21-yard scoring scamper to signal a rout at the end of the first period.

But a Husker fumble set up a Falcon tally in the second quarter, and Air Force capitalized on a field goal, an onside kick, a desperate passing attack and a third-quarter TD to pull up 21-17.

Solich sewed it up with his third TD of the day, a 41-yard sprint after squirming loose at the line, and the Husker defense took command in the fourth quarter.

H’MAX NOTES: Solich became the first Husker to rush for 200 yards in a game. His single-game rushing record would stand for 11 years. … On the last play of the first half, Air Force ran a fake field goal from the Nebraska 15. Sonny Litz passed to Carl Janssen, who was stopped at the Nebraska 1 by three Husker defenders.