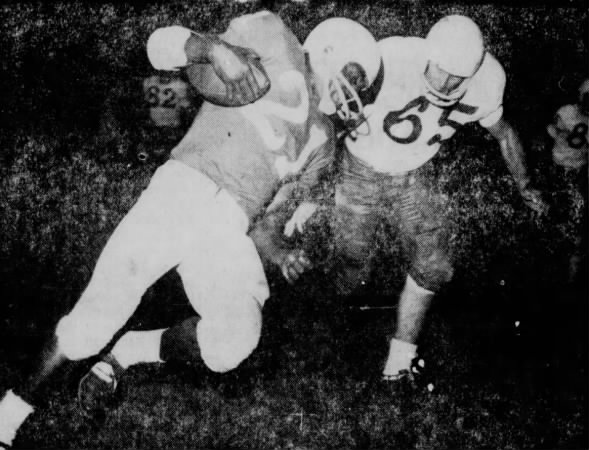 Leading the veterans was All Big 8 quarterback Dennis Claridge. Denny hit all seven passes he tried for a total of 94 yards and one touchdown, a 22-yard flip to Larry Tomlinson for the clinching margin.

Top thrill of the night contest was Kent McCloughan’s 88-yard kickoff return TD. The Broken Bow swifty sprinted all the way after the Whites had gone ahead, 7-0, on Frank Solich’s 5-yard sweep in the first quarter. A freshman, Solich was the leading gainer with 56 yards.

The Reds settled the issue just before the half when frosh Dave LeSack intercepted a pass and ran 42 yards to the White 3. Another frosh, Ron Poggemeyer, scored on the next play and the Reds had a 21-7 margin.

Kindling Husker hopes for 1963 was the performance of the White unit, quarterbacked by Fred Duda, Chicago frosh. He skippered a third-quarter drive against the battle-tested first unit which resulted in Solich’s four-yard TD plunge.