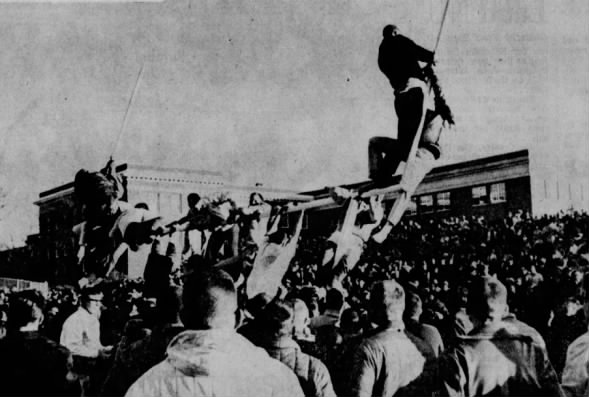 The south goalposts come down after the win, which earned Nebraska its first Big Eight title since 1940. · The Lincoln Star · Newspapers.com

Nebraska thoroughly shocked the powerful Oklahoma Sooners and claimed the Big 8 championship in a game played one day after the assassination of President John F. Kennedy. It was 17-0 in the fourth quarter, and 29-7 with two minutes left in the game before the Sooners battled back to make the final score 29-20.

Friday night, university officers and officials in both states had conferred at length. They were counseled by the NCAA and Big 8 officials. Neither state nor school wanted to play the game because of the national tragedy — but Oklahoma had a game the following week, Orange Bowl officials were on hand and needed to know about a representative, the game was a sell-out, thousands of people had traveled into Lincoln, and TV staffs were on hand.

Finally, late Friday night, it was the decision of all officials concerned that the game be played. However, all pre-planned festivities were canceled and the huge crowd stood in silent tribute to Kennedy prior to the kickoff. Flags were at half-staff.

Dave Theisen’s 27-yard field goal got the Huskers going in the first quarter. Nebraska made it 10-0 in the third period on Rudy Johnson’s 2-yard run after Bob Brown forced the Sooners’ Lance Rentzel to fumble at the OU 15 on a punt return . A fumble recovery on the OU 32 set up the next NU score, Claridge scoring from the one.

After Oklahoma scored on a 22-yard pass from Ronnie Fletcher to John Flynn, Theisen intercepted a Sooner pass on the OU 36 and ran to the 15. Four plays later Kent McCloughan scored and it was 23-7 with 7:15 left in the game. On the first play after the kickoff, McCloughan grabbed another Sooner pass and Willie Ross dashed 19 yards to the one, setting up a Duda dive to make it 29-7 with 5:43 left.

Oklahoma refused to quit and after a Husker fumble, the Sooners cashed in with a 27-yard TD run by Wes Skidgel with 1:59 left. Another NU fumble set the stage for Tommy Pannell’s 26-yard pass to Skidgel for the final tally with 42 seconds left.

Nebraska held OU All America fullback Jim Grisham to 16 yards and blunted the No. 2 rushing offense in the country, allowing only 98 yards. Meanwhile, the No. 1 rushing Huskers chalked up 194 yards and had a final yardage edge of 254-213.

With the victory came the invitation from the Orange Bowl Committee to be the Big 8 representative in Miami on New Year’s Day. Nebraska, 9-1 for the season, 7-0 in the Big 8, was booked to meet a fine Auburn team.