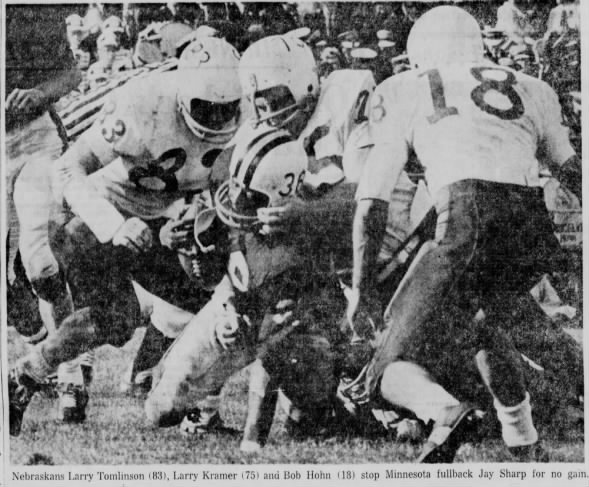 A 65-yard scoring pass-run early in the fourth quarter enabled the Huskers to get by the rugged Big 10 Minnesota Gophers, 14-7, before a sellout crowd which included some 5,000 Nebraskans.

With the score tied 7-7, Nebraska quarterback Dennis Claridge spotted sophomore end Tony Jeter darting behind the Gopher safety and hit him with a perfect strike. Jeter out-legged all pursuers for the victory TD.

It was a great day for Claridge who was playing before a hometown audience. He scored the first NU touchdown, passed for the winning TD, hit 4 of 8 passes and generaled the Huskers in expert fashion. A last-quarter drive by the Scarlets ended on the Gopher goal-line at the final gun, Willie Ross missing a last-play TD drive by inches.

Sophomore back Frank Solich broke an ankle in the game, bringing an early end to his first varsity season.

H’MAX NOTES: Minnesota’s TD came on a 71-yard drive, with a 34-yard pass from Bob Sadek to Jerry Pelletier putting the ball on the Nebraska 1. … A UPI account of the game said Claridge’s punting “plagued the Gophers all afternoon.”