Nebraska made its second Orange Bowl trip a happier one than the first with a 13-7 win over Auburn. The Huskers evened their bowl recordand handed Bob Devaney his second bowl win in as many tries. 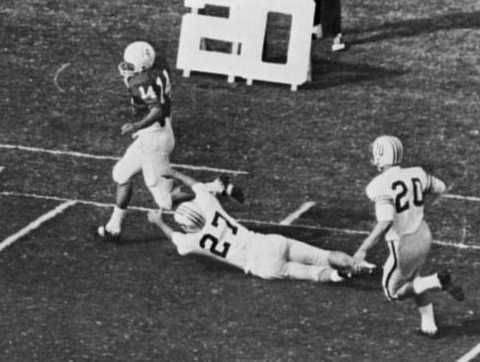 Husker quarterback Dennis Claridge broke the game open before fans had settled in their seats. Aided by a Bob Brown block, Claridge bolted 68 yards down the sideline to put NU ahead 7-0 on the Huskers’ second play from scrimmage. At the time, it was the longest TD run in OB history. Moments later, Dave Theisen broke another OB record with a 31-yard field goal. The record lasted until the second quarter when he booted a 36-yarder to give NU a 13-0 halftime lead.

Auburn quarterback Jimmy Sidle almost brought the Tigers back, but Husker linebackers John Kirby and Bruce Smith broke up a fourth-and-four pass inside the 10-yard line with less than two minutes to go to preserve the win.