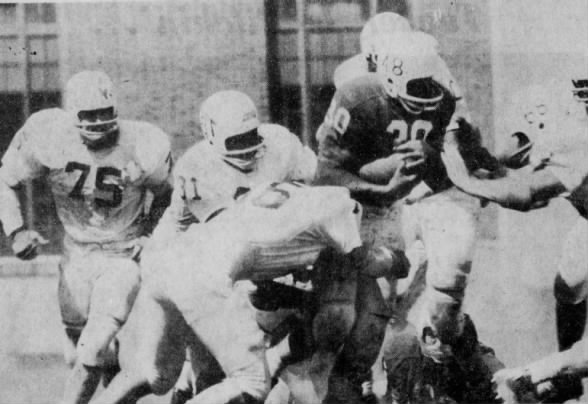 After falling behind early in the fourth quarter on a long touchdown pass, the Reds took control to emerge victorious, 33-21, in an evenly contested spring game.

Doug Tucker took over quarterbacking duties for the Whites in the first quarter after starter John Faiman suffered a pinched nerve. Tucker completed 7 of 15 passes for 112 yards and two touchdowns, including a 49-yarder to Marquette transfer Dave Theisen with 10:13 left in the game. Tucker’s two-point conversion pass to Larry Donovan gave the Whites a 21-20 lead.

Quarterback Dennis Claridge engineered four of the Reds’ five touchdown drives. He completed 7 of 10 passes for 96 yards and rushed for 31 yards, including a four-yard TD run that put the Reds back on top, 26-21, with less than six minutes left in the game.

The Whites’ hopes for victory were dashed when Willie Paschall intercepted a Tucker pass near midfield. Quarterback Ron Gilbreath led a 54-yard drive for the Reds and scored the final touchdown on a two-yard run.

NOTES: The Whites were coached by Mike Corgan, George Kelly, Cletus Fischer and Tom Osborne. For the Reds, it was Carl Selmer, John Melton, Harry Tolly and Dallas Dyer. Jim Ross was on a recruiting trip. … The game’s leading rushers were Bill “Thunder” Thornton with 41 yards, and Rudy Johnson and Gene Young with 40. Thornton also had a 59-yard kickoff return.