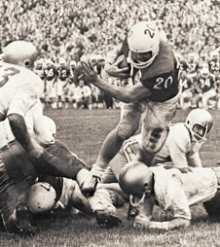 Warren Powers scores from the 3

Nebraska made it three in a row with a convincing 36-22 victory over Iowa State in the first Big Eight test of the season. With Dennis Claridge scoring three TDs and passing for another, Nebraska had a 28-0 lead with only 7:49 gone in the second quarter.

The Cyclones – sparked by All American Dave Hoppmann and a fine soph, Tom Vaughn – refused to holler “uncle” and battled for 22 points. But the early NU jump was too much. Nebraska’s first-quarter TDs came on drives of 70 and 80 yards.

H’MAX NOTES: Nebraska scored touchdowns on four of its first five possessions. … Nebraska’s only touchdown of the second half came after tackle Tyrone Robertson blocked an Iowa State quick kick and end Larry Tomlinson recovered the ball on the ISU 18. ...

Fullback Bill “Thunder” Thornton left the game in the first quarter with a leg injury, and Dennis Stuewe remained sidelined from his injury at Michigan. … With the victory, NU moved up to 15th in the UPI poll, and the Orange Bowl was reported to be expressing interest in the Huskers.