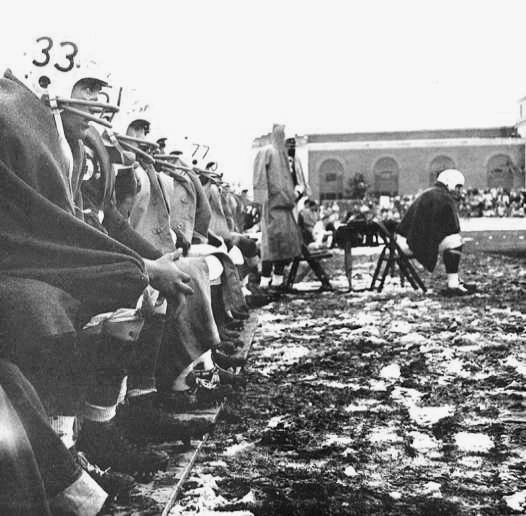 Fullback Bill Comstock (33) and other Huskers sit on the muddy sideline.

No joy in Mudville for Huskers: Not even a first down

On a Memorial Stadium field turned into a hog wallow by sopping snow, eighth-ranked Colorado proved to be the better mudders, throttling the Cornhuskers in a game far more one-sided than the 7-0 score.

Nebraska went without a first down or a completed pass for the second time in school history, matching a dreary milestone posted in a 0-0 tie against Pittsburgh in 1928. The Cornhuskers were outyarded 343 to 31 and never got beyond their own 41 in the first half or their own 28 in the second half. In the final 30 minutes, NU netted zero yards of total offense.

The score was kept deceptively close thanks to four lost fumbles and three missed field goals by the Buffaloes, and the booming punts of Nebraska’s Dennis Claridge.

On a gray, 31-degree day, Colorado broke the scoreless deadlock in the third quarter. CU linebacker Joe Romig’s tackle knocked the ball loose from Nebraska halfback Dick Callahan, and CU’s Claude Crabb recovered on the Cornhusker 11. Three plays and a penalty later, quarterback Gale Weidner wedged into the end zone from the 1, and Jerry Hillebrand added the point after.

CU advanced to the Nebraska 38, 29, 37 and 19 in the first half but came up empty each time. After their touch­down, the Buffaloes reached the NU 16 and 28, and on Colorado’s final possession, the game clock expired with the Buffs on the Nebraska 2 yard line.