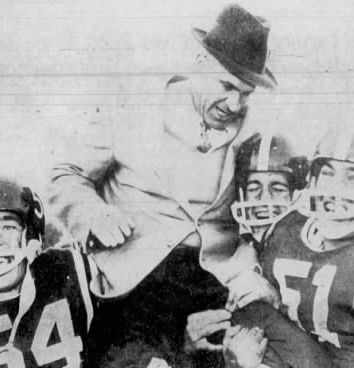 Coach Bill Jennings gets a victory ride from Jim Moore (54) and Mick Tingelhoff (51).

It was an upset for the ages as NU broke Oklahoma’s 74-game conference unbeaten streak with a 25-21 Homecoming victory in Lincoln.

Oklahoma, favored by 14 to 17 points, fell to the Huskers for the first time since 1942. It was the first conference defeat in the 13-year career of Sooner coach Bud Wilkinson.

The Sunday Journal & Star reported: “It was the Tolly-Meade-Fischer combo that really stole the show this happy afternoon, Harry with his field generalship and punting, Ron with his game-winning field goals and game-saving pass interception, and Pat with his spectacular punt return which set up NU’s third TD.”

In the first half, Nebraska matched OU’s two TDs but missed both conversion tries and trailed 14-12 at intermission. The first Husker touch­down came on a 3-yard Harry Tolly pass to Dick McDaniel, capping a 47-yard drive, and the second came on a punt block by Jim Moore that was picked up by Lee Zentic and returned 36 yards to paydirt. OU’s first-half scores came on marches of 72 and 56 yards.

Nebraska took the lead for good on Ron Meade’s 22-yard field goal in the third quarter and added a TD and another Meade field goal in the fourth period for a 25-14 lead. The touchdown was set up by Fischer’s 61-yard punt return, and two plays after the ensuing kickoff, Don Olson recovered an Oklahoma fumble at the Sooners’ 43 yard line to set up the field goal.

Victory seemed in peril when Oklahoma proceeded to march 67 yards in nine plays for a touchdown and then forced a Nebraska punt. But Meade sealed the win in the final minute when he picked off an Oklahoma pass in the end zone on a third-and-10 play from the Nebraska 27.