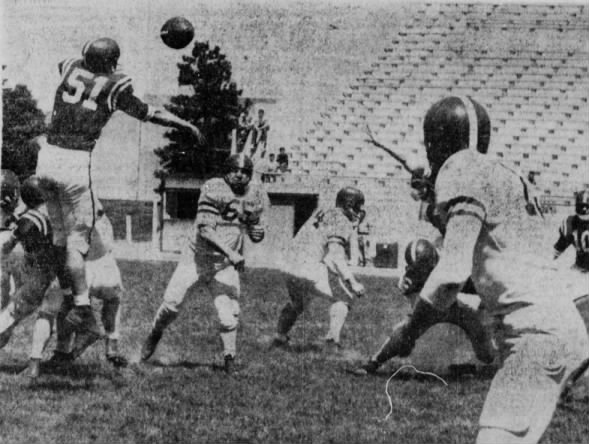 The Varsity defense shut out the Alumni until the final two minutes in registering a 14-6 win on an 80-degree day at Memorial Stadium.

On offense, the Varsity alternated between the single-wing and split-T formations. The single wing was used when Pat Fischer scored the game’s first touchdown on a four-yard run in the second quarter to cap an 11-play, 80-yard drive. Running around right end, Fisher eluded his brother Rex en route to the end zone.

In the third quarter, the Varsity scored from the split T when Harry Tolly connected with Larry Naviaux on an eight-yard touchdown pass. Just 34 yards were needed on that drive after a 12-yard Alumni punt.

The Varsity returned the favor late in the game when a short punt gave the Alumni the ball just 28 yards from the goal line. Quarterback Sam Vacanti scored the Alumni’s touchdown from one yard out.

During the game’s last two plays, it was father vs. son, mano a mano, as the Varsity’s Dennis Doyle played at offensive tackle opposite Ted Doyle, former NFL lineman whose senior season in Lincoln was in 1937. “On the first play,” the Omaha World-Herald reported, “pappy bulled the youngster aside and assisted in the tackle. His son kept Ted pretty well tied up on the final play, however.”

In what’s believed to be another spring game first, guard Dennis Emanuel played for the Varsity a year after playing for the Alumni. He joined the old-timers for the 1957 game after getting out of the military, then decided to return to school finish his education and eligibility. He can be found on Nebraska’s 1951, ’52, ’58 and ’59 rosters.

• The game’s longest play was by the Alums’ Bob Smith. The former Cleveland Browns back returned the opening second-half kickoff 54 yards, but the Alumni could not cash in.

• For the first time, the university took out insurance on the Alumni players. The $170 policy carried a $10 deductible and paid up to $1,000 for an injury and $5,000 for accidental death.

• A prized recruit, all-state tackle Monte Kiffin of Lexington, was a visitor on campus with his parents.

• This spring game was not the end of spring drills. Workouts were scheduled for Monday and Wednesday to get in the 20 allotted practices.