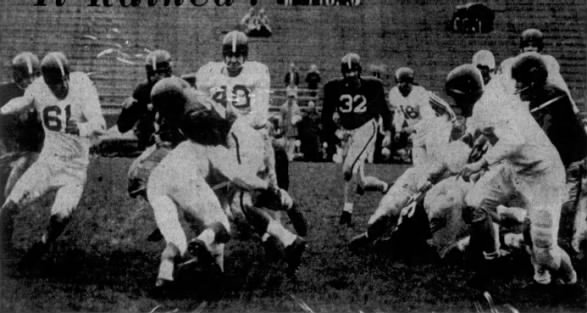 The Alumni turned two of the Varsity’s eight lost fumbles into touchdowns and played stellar defense in registering a 14-0 win on a cold and rainy afternoon in Lincoln.

New coach Pete Elliott’s offense penetrated the Alumni 30 yard line just once, advancing to the 27 in the third quarter.

Most of the Varsity’s 11 fumbles occurred “when ball carriers were shuddered by fierce tackling,” wrote the Lincoln Journal Star’s Dick Becker.

The old-timers had to travel just seven yards for their first score after Carl Samuelson recovered a fumble by Gordon Englert in the first quarter. John Bordogna’s 1-yard touchdown plunge came on fourth down.

In the fourth quarter, opportunity knocked again for the Alumni when George Gohde recovered Varsity quarterback Roy Stinnett’s fumble on the Varsity 29. Rex Fischer scored on a 7-yard run after the drive was kept alive by Jon McWilliams’ leaping pass reception on a fourth-down play.

The Alumni lost just one fumble despite having practiced only once. It was their first win in the spring series in five tries.

“When one line beats another and one team fumbles a lot in its own area — well, that’s pretty much the story of a ball game,” Elliott said.

The game wrapped up five weeks of spring drills for the 1956 Huskers.