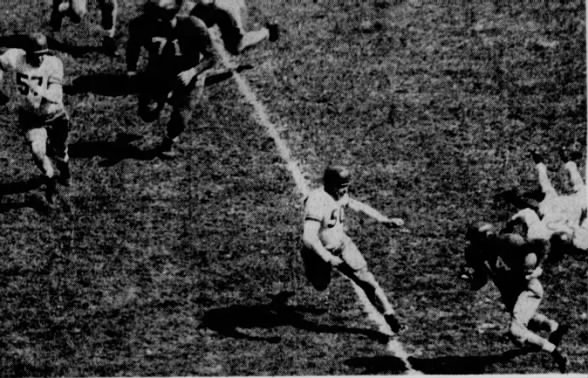 Varsity halfback Tom Carodine tries to get around Alumni player-coach Tom Novak during the second quarter. · The Lincoln Star · Newspapers.com

John Bordogna passed to George Paynich for a 9-yard touchdown on the game’s final play to cap a frantic final minute and give the Varsity a 27-25 win over the Alumni in the Huskers’ 1951 spring practice finale.

The Alumni seemed to have won the game with 47 seconds left, going ahead 25-20 on a 17-yard touchdown pass. The aerial from Fran Nagle was bobbled by the intended receiver, Ken Fischer, batted by a Varsity defender and caught by the Alums’ Ray Magsaman, who made a diving grab.

A short kickoff subsequently gave the Varsity the ball on the Alumni 48. Bordogna hit Tom Carodine with a pass to the 25, then ran around right end to the Alumni 9.

Two seconds remained, and Bordogna threw a strike to Paynich, who beat two Alumni defenders for the ball in the end zone.

NOTES: Nebraska’s star halfback from 1950, Bobby Reynolds, did not play in the game because he was competing instead on the Huskers’ baseball squad. … The Alumni’s touchdown in the final minute was set up by a 55-yard interception return by Ken Brooker to the Varsity 30. … The Alumni converted just one of four PATs. … The Varsity needed to go just five yards for its second touchdown after a mishandled snap on an Alumni punt attempt.