Nebraska answered Oklahoma’s fast 14-0 start by reeling off three consecutive Bobby Reynolds touchdowns, and going into halftime the Huskers were tied 21-21 with the top-ranked Sooners in Norman.

But OU had an even stronger launch to the second half, and it was too much for the Huskers to overcome.

At the final whistle, it was Oklahoma 49, Nebraska 35, ending a year in which scoreboard numbers were rung up by NU and its opponents like never before in the program’s six-decade history. The 35 points were by far the Huskers’ highest point total ever in a losing cause, a mark that would stand until 2001.

The halftime tie didn’t hold up for long. Oklahoma opened the third quarter with a 75-yard touchdown drive, then converted a Reynolds fumble at the Nebraska 8 into a quick score. Then came an interception and a 69-yard scoring run by Billy Vessels. Just like that, about 10 minutes into the third period, the Sooners had all the breathing room they would need at 42-21.

Vessels gashed the Huskers for 208 rushing yards, while Reynolds was held to a season-low 84.

Vessels, like Reynolds, lost a costly fumble, setting up the Huskers for their first touchdown at the OU 20 in the opening quarter. A hit by Nebraska guard Carl Brasee forced the turnover.

In the second period, Nebraska tied the game at 14 apiece on a 63-yard drive. On OU’s subsequent possession, a fumble by Dick Heatly on third-and-long gave the Huskers the ball at the OU 16, and Reynolds scored from there. That gave Nebraska its only lead, 21-14, with 3:03 left in the half.

Aided by 59-yard pass play, the Sooners tied the score about a minute before halftime. After intermission came the three third-quarter TDs that made it 28 unanswered points for Oklahoma, all but wrapping up the 30th consecutive victory for the Big Seven champs. 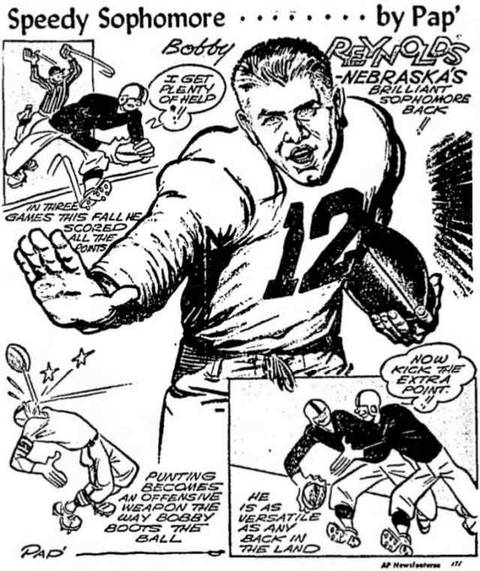 Sophomore Bobby Reynolds’ three touchdowns and five extra points against the Sooners assured him of the top spot on the season’s NCAA scoring chart with 157 points. That total broke the major-college record of Colgate’s Leonard Macaluso, who scored 145 in 1930.

Reynolds finished the season with 1,342 net yards rushing, a Nebraska and Big Seven Conference record. With 198 carries, he averaged 6.78 yards per tote and 149.1 yards per game.

It was the same old story on defense — the Huskers just couldn’t stop the other side’s attack.

Reynolds ... found a willing taker and a remarkable sophomore match in the blazing person of Billy Vessels, the supercharged Sooner flash who completely dominated the yardage duel.