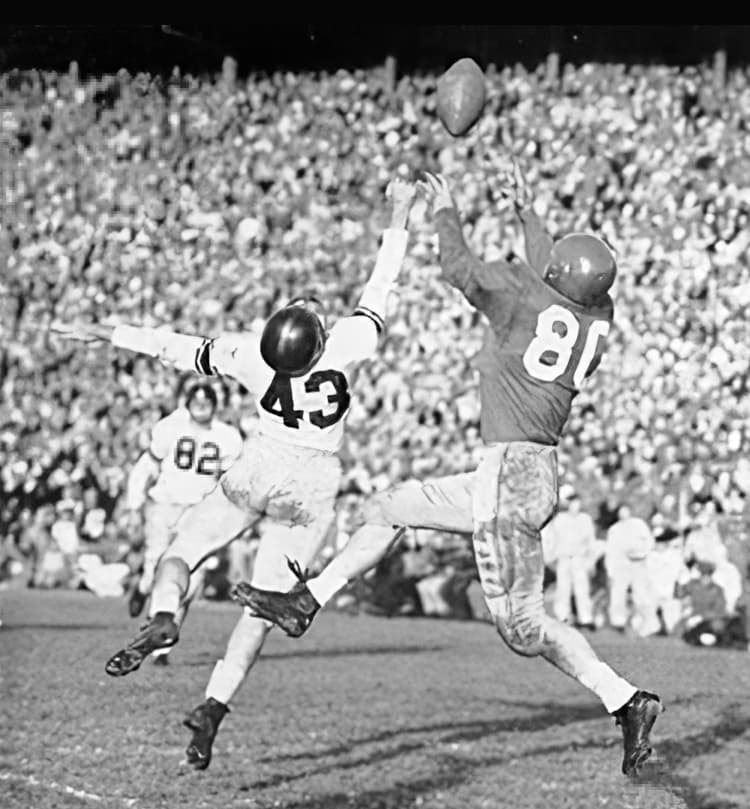 Early in the fourth quarter, a Fran Nagle pass to Dick Regier in the end zone was too hot to handle, but the Husker end was able to bat the ball into the air, turn and make the catch for the touchdown. | 1951 Cornhusker yearbook

It was a shootout unlike any other in the 60-year history of Nebraska football: Five lead changes in the second half. Each team with at least five touch­downs and 500 yards of total offense. And an unforgettable fourth-quarter run by sophomore sensation Bobby Reynolds to help seal a 40-34 Husker win over visiting Missouri.

Clinging to a 33-27 lead and facing fourth-and-one at the Mizzou 33 midway through the fourth quarter, the Huskers sent Reynolds on a right sweep. Nebraska’s blocking quickly broke down, and Reynolds was forced to retreat. Stiff-arming, spinning and weaving, he was chased nearly 25 yards behind the line of scrimmage before finally turning back upfield.

Now he was headed in the right direction, but disaster was far from averted. Missouri defenders remained in hot pursuit, but a few nifty moves, a couple of broken tackles and some timely blocks left Tigers grasping air or tasting turf as Reynolds made his way down the right sideline. Past the first-down marker he went, and then all the way into the end zone, much to the delight and amazement of the Homecoming crowd.

That wasn’t the only TD that had the Nebraska partisans buzzing. In the waning seconds of the first half, Fran Nagle eluded a tackler a dozen yards behind the line of scrimmage and heaved a pass nearly 50 yards into the end zone, where Reynolds out­fought two well-positioned defenders to make an improbable catch. The score completed a three-play, 77-yard drive and made it a 14-13 game at intermission.

Though Nebraska led by 40-27 after Reynolds’ spectacular fourth-quarter run, the Tigers were far from finished. Missouri put together a 63-yard touchdown drive to make it a six-point game with 1:50 left and then forced the Huskers to punt. Taking over at their own 49, the Tigers had time for just one play. The snap from center to quarterback was fumbled, but halfback John Glorioso alertly picked up the ball, faded back and and heaved a long pass downfield. Inside the NU 10, Nebraska’s Ron Clark deflected the ball upward, and it hung in the air for a dangerous moment or two before falling incomplete.

The wild victory was in the books. As it turned out, Nebraska coach Bill Glassford was spot-on when he had this to say a day or two before the game: “I figure we will have to score five touchdowns to win, and I doubt if that will be enough.”

Game highlights
“It was as fren­zied a football contest as had ever been played on Nebraska soil. … Sensa­tion­al plays were piled one upon the other.”

If that AP description seems hyper­bolic, consider this: Until 1950, there had never been a Husker game in which both teams scored at least 21 points.