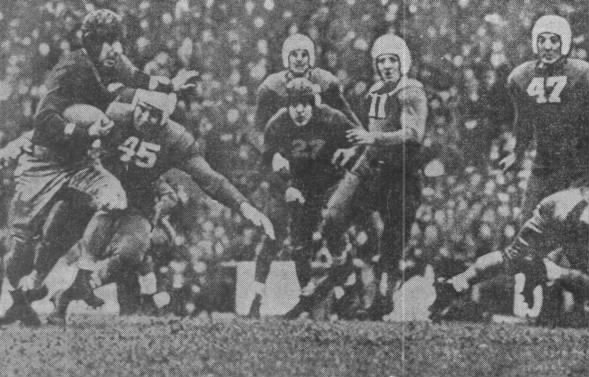 Despite being held to negative net yardage, the Huskers carried a 7-0 lead into the fourth quarter at No. 1 Pitt, thanks to Jack Dodd’s 60-yard punt return. But the Panthers scored twice in the final period and pulled out the win, 13-7, in a battle of unbeaten teams.

Dodd’s return came late in the third quarter. Harris Andrews fielded the Pittsburgh punt and ran toward the right, then handed off to Dodd on a reverse. Dodd was scarcely touched as he raced down the left sideline and into the end zone. The Cornhuskers had a 7-0 lead and hopes for an upset victory.

Pitt responded, however, by driving 80 yards and scoring a touchdown early in the fourth quarter. But the Panthers still trailed by 7-6 after Frank Souchak’s extra-point attempt hit the upright. On its ensuing possession, Nebraska fumbled on a bad exchange from center at its own 33, and the Panthers used half a dozen running plays to punch into the end zone for the winning score.

According to United Press, Nebraska had 31 yards in gains on offense but 50 yards in losses, for a net of minus 19. Pittsburgh, meanwhile, rolled for 250 net yards on offense and picked up 13 first downs to Nebraska’s two.