ELDON McILRAVY, the starting fullback for Nebraska, was feared to be near death after suffering a head injury during the third quarter. The sophomore from Tecumseh recovered, but he was done with football after one collegiate game. Minnesota’s Rudy Gmitro was carried from the field on a stretcher after the same play but was back in action the next week against Indiana. 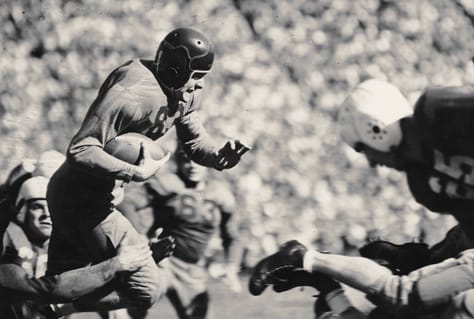 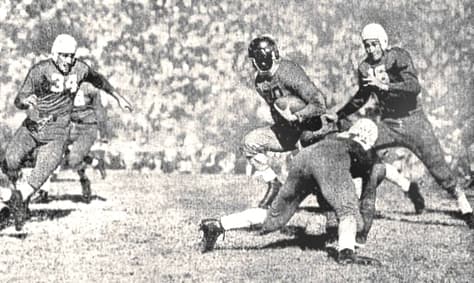 HEMMED IN: Gopher halfback Rudy Gmitro is stopped for a two-yard gain in the third quarter. Closing in are Bill Callihan (34) and Robert Mills (46). 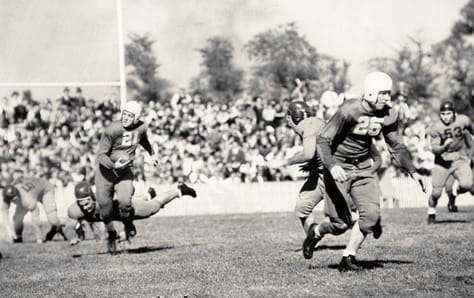 ON THE RUN: Harris Andrews (21) returns one of his three interceptions. 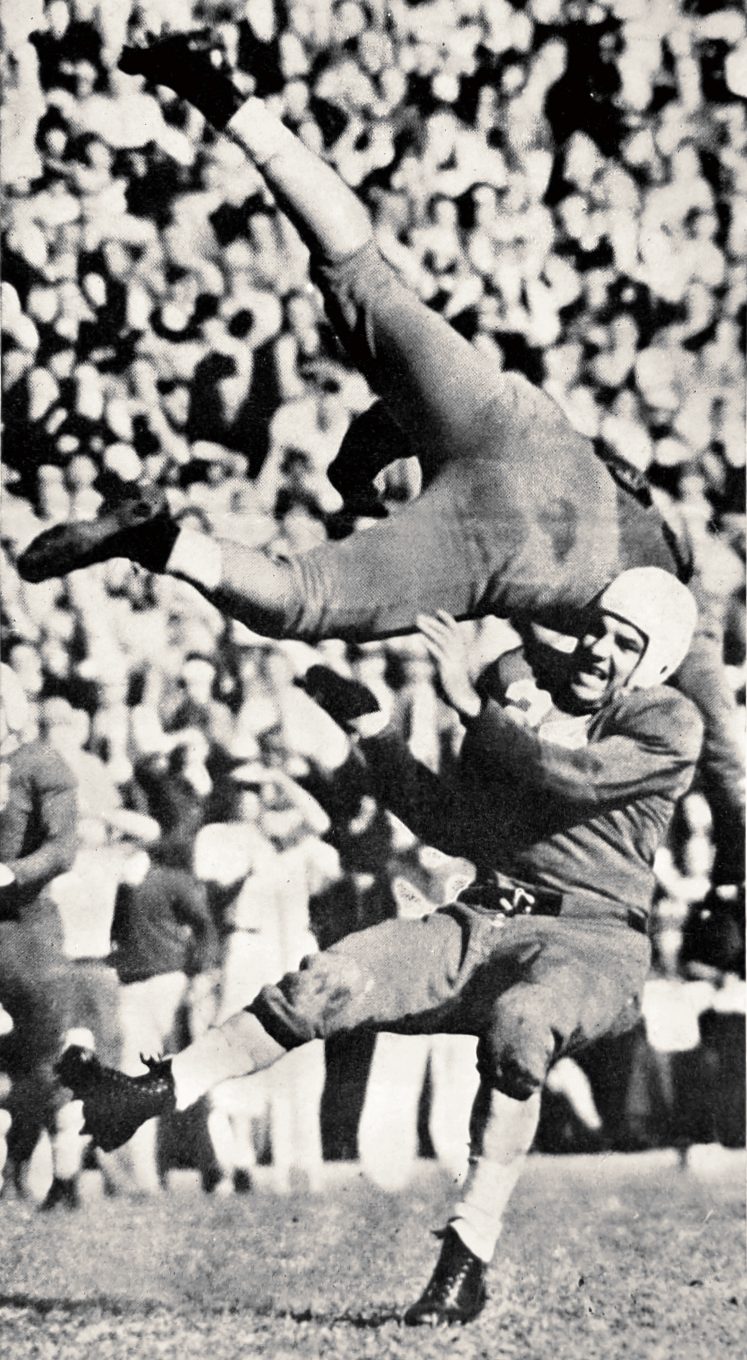 PASS FOILED: Bill Callihan (or is it Jack Dodd?) upends a Gopher receiver.

It was an upset that “rocked the gridiron world,” as the Associated Press put it. “Astonishing,” the wire service added in its game dispatch.

Minnesota, on a quest for a fourth consecutive mythical national championship, met its match on an 82-degree October afternoon in Lincoln. Playing tough and opportunistic football, the Cornhuskers stunned the Gophers, 14-9, in the Nebraska coaching debut of Maj. Lawrence McCeney “Biff” Jones.

Minnesota ran up a three-to-one advantage in yardage, but Nebraska kept the Gophers out of the end zone for the final 55 minutes and cashed in on two key turnovers. It was just the third victory over Minnesota in 19 tries for the Huskers.

Nothing about the game’s opening minutes foreshadowed trouble for the visitors. Minnesota marched 63 yards in 4½ minutes for a touchdown and a 6-0 lead. That, however, would be the last of the easy going for the Gophers. Jones changed the Huskers’ defensive alignment, moving tackle Fred Shirey off the line and into an extra linebacker position. On offense, Nebraska played it cautious and frequently punted on first, second or third down.

Early in the second quarter, one of those punts paid off big. Gopher safety Bill Matheny coughed up the ball on a hit by Husker end Lloyd Grimm, and center Charley Brock recovered on the Minnesota 24. Quarterback John Howell connected with Grimm for a key first down at the 13. Facing fourth and a foot moments later at the Minnesota 4, Howell followed the blocking of Brock and guard Lowell English into the end zone. After English’s conversion kick, Nebraska led 7-6.

To the delight and amazement of the frenzied home crowd, that’s how the score stood through the second and third quarters as the Husker defense turned back multiple Minnesota threats. But the third period ended with the Gophers deep in NU territory. On the first play of the fourth quarter, Horace Bell’s field goal from the 23 put Minnesota back on top, 9-7.

Dreams of a Nebraska upset faded as NU’s next possession went nowhere, but again it was a punt that changed the Huskers’ fortunes. Minnesota’s Harold Van Avery fumbled the Nebraska kick, and Husker fullback Bill Callihan recovered at the Minnesota 40.

To the air went the Cornhuskers, passing three times on their next six plays. First came a 20-yard strike from Harris Andrews to Elmer Dohrmann, then an incompletion, and then the clincher: Andrews dropped back to the 35 — 15 yards behind the line of scrimmage — and fired a deep pass over the middle. Callihan caught the ball in stride behind a leaping Gopher defender at the 10 and scooted into the end zone untouched. With English’s PAT kick, it was NU 14, Minnesota 9.

About 10½ minutes remained. On their next two possessions, the Gophers stuck with their running game but couldn’t muster a first down either time. Once the game clock ticked down below five minutes, Minnesota went to the airways, but Andrews twice picked off Gopher aerials to snuff any comeback hopes. The second interception came near midfield in the game’s waning moments, and the Huskers ran out the clock from there.

The giant had been felled. Fans swarmed the field, and Lincoln erupted in revelry that would last all night long.

COACH JONES praised QB John Howell, the game captain, for his “faultless” generalship. “We had just two scoring chances and Howell took complete advantage of both.”

HOWELL’S PUNTING also drew rave reviews from the coach. A primary goal was to prevent any big returns by Andy Uram, whose long runback in the final minute gave Minnesota a 7-0 win over Nebraska in 1936.

STRANGE BUT TRUE: Howell doubled as a Daily Nebraskan society columnist, and he wrote a few paragraphs after the game.

INTERCEPTIONS deep in Husker territory kept Minnesota from turning yards into points. Jack Dodd’s pick at the NU 5 ended a first-quarter drive. Interceptions at the NU 3 by Eldon McIlravy and at the NU 14 by Harris Andrews foiled the Gophers during the third quarter.

IN JONES’ VIEW, the return of Dodd’s interception to the NU 20 on a couple of laterals was a turning point. “From that point our boys took an extra hitch in their belts, rolled up their sleeves and went to work.”

BILL CALLIHAN was America’s most famous second-string fullback after the game. Not only did he tally the winning touchdown and set up the score with a fumble recovery, but he was also identified as the Husker delivering a big hit in an eye-catching Associated Press photo that got prominent play in a number of newspapers (and a few weeks later in Life magazine). However, the player in the photo might actually have been Jack Dodd, as the caption in the Omaha World-Herald indicated. Callihan wore No. 34 and Dodd No. 24.

DISCREPANCIES of that sort are not unusual when trying to nail down game details. Just one example: The Minneapolis Tribune said it was John Howell who made Nebraska’s fifth interception. In this case, we think the Omaha World-Herald, being far more familiar with the Huskers, probably was correct in saying it was Harris Andrews.

NATIONAL BROADCASTS of the game were carried by the CBS, NBC and Mutual networks, worthy of a contest featuring the teams that finished No. 1 and No. 9 in the final 1936 Associated Press poll.

NEITHER TEAM was ranked entering the game, but that’s only because the first poll wouldn’t come out until Oct. 18, several games into the season. The preseason poll didn’t exist until 1950.

IT WAS THE OPENER for Nebraska, but the Gophers had a tune-up a week earlier, winning 69-7 against North Dakota State.

A PEP RALLY and bonfire took place on campus Friday evening, and parading students afterward tied up traffic at 13th and O streets for nearly half an hour. But that was nothing compared to the Saturday night revelry.

SEVERAL HUNDRED FANS traveled to Lincoln on the Denver special and were “one of the liveliest of delegations rolling into Burlington station,” wrote the Lincoln Star’s Gregg McBride. “The fans from the Mile High city, always loyal to Nebraska U., wore pennants labelled ‘Cornhusker Boosters.’”

CHARLEY BROCK lost 14 pounds during the game, weighing in at 185 pounds afterward, the Omaha World-Herald reported.

THE PREGAME CONSENSUS was that Nebraska, a two-touchdown underdog, had the advantage in the trenches but that Minnesota had the better backfield. The Huskers had a veteran line but was replacing two backs who were picked in the first round of the 1937 NFL draft — Sam Francis and Lloyd Cardwell.

NEBRASKA FINISHED 11th and the Gophers fifth in the final 1937 AP rankings. The Huskers had two ties but just one loss, a 13-7 defeat at Pittsburgh, which finished No. 1. 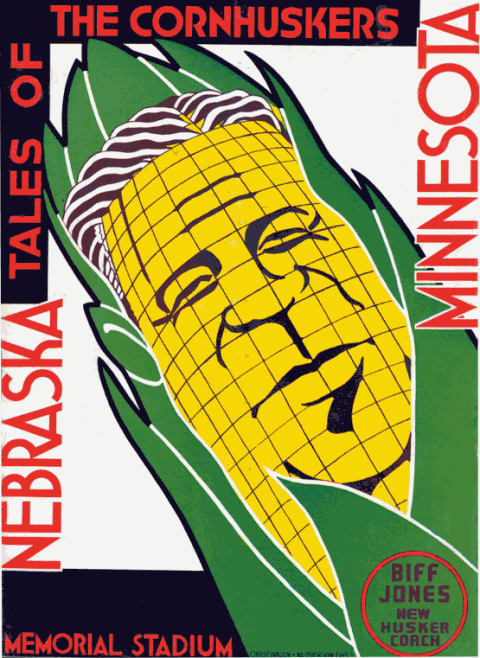 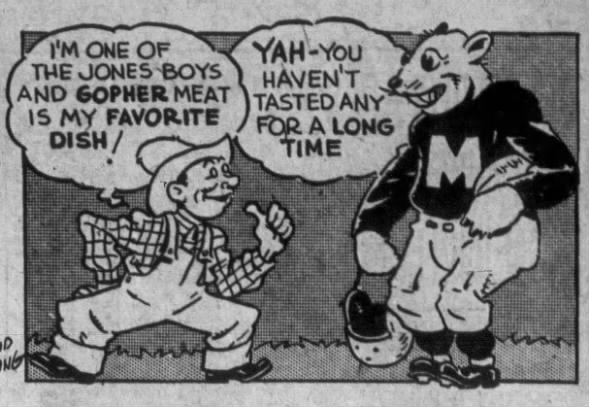 Nebraska entered the game with a 2-14-2 record against Minnesota. Neb. State Journal · Newspapers.com

We doff our hats to these scrappy boys [from Nebraska]. They came back from a poor start and just wouldn’t be beaten.

The Huskers had two opportunities and made the most of both openings by taking to the air lanes.

Coming from behind an outfit like Minnesota twice is a day’s work in anybody’s league.

Charley Brock ... gave an exhibition of all-around playing that will live long in the memory of the crowd that watched his efforts Saturday. He was all over the field.

Nebraska took Minnesota with passes, just as Biff had planned.