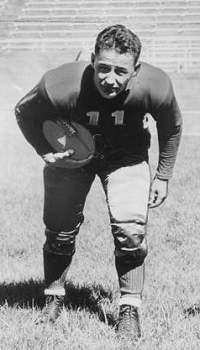 Sophomore halfback Gerald LaNoue scored the only points the Huskers would really need on a second-quarter run. His touchdown capped a drive of about 50 yards that was aided by a pass interference penalty.

The Huskers finished their season with a 22-0 home win over Oregon State, but during the first 45 minutes it wasn’t the cakewalk that the final score might indicate.

It was a 6-0 nail-biter late in the third quarter, with Oregon State gaining a first-and-goal at the Nebraska 5 yard line and threatening to utterly ruin the home crowd’s Thanksgiving. But four times the Huskers rose up and stopped the Beavers from scoring. The Lincoln Star’s Gregg McBride described the fourth-down play from the 2 as follows:

The crowd howled itself hoarse as the Oregonians lined up for the fourth and final try. Shoulder to shoulder, the Cornhusker line and backs functioned as a unit, met Joslin, the Beaver plunger, at the scrimmage line. Not an inch did the Huskers bulge. In fact the scarlet jerseys rolled the western ball-lugger back to the five-yard stripe, by way of making sure there was no doubt their goal line was uncrossed.

The goal-line stand ended the third quarter and was quickly followed by a booming George Sauer punt from the end zone that put Oregon State all the way back at its 20. The swing in field position sparked a 16-point Husker outburst in the final period: a safety on a bad punt snap, and touchdown drives of 57 and 33 yards following interceptions by Bernie Masterson and Warren DeBus.