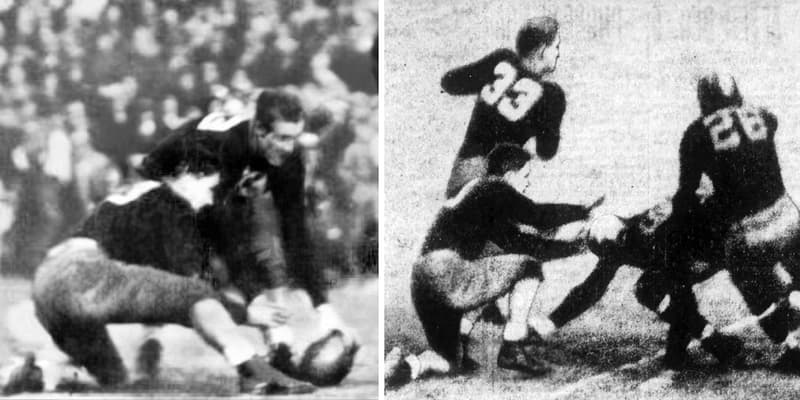 Bernie Masterson scoops up the ball and scampers for Nebraska’s only touchdown.

The Huskers were without their biggest star, George Sauer, but they did have some good fortune on their side.

On an extremely windy day at Memorial Stadium, Nebraska beat Iowa, 7-6, thanks largely to three kicking-game miscues — one of them the Corn­huskers’ own flub that worked in their favor.

Near the end of the first half, Nebraska took over at the Iowa 29 yard line after the Hawkeyes’ Dick Crayne, attempting to punt, bobbled the snap and then completely missed the ball when he swung his leg. Three Husker running plays later, Nebraska had a first down at the Iowa 4, but the Hawkeyes stiffened. With 11 seconds left in the half, Nebraska opted for a field goal attempt on fourth down. Halfback Jack Miller was the holder, quarterback Bernie Masterson the kicker. The Sunday Journal and Star described what unfolded:

After a bit of confusion Bernie and Jack dropped back, doffed their helmets and assumed a place-kicking position. Back came the snapback, it squirmed from Miller’s grasp and Bernie darted forward, yanked the oval from the ground, wheeled and started a mad dash around the Iowa right end. He angled into the end zone, arriving just in time before he would have been forced out of bounds, a Hawkeye bumping him as they sprawled into the promised land with Bernie clutching six valuable points.

The Journal and Star’s John Bentley wrote: “The play went so perfectly that many in the press coop thought it had been planned just as executed.” (You can count the Associated Press writer among those who assumed incorrectly.) Miller, the holder, said years later that Masterson’s score was “a mighty fortunate outcome” and that the wind had played havoc with the snap.

After the improbable touchdown, the Masterson-Miller duo lined up again for the extra point, but this time the snap was true, and so was the kick. Nebraska led at halftime, 7-0.

The second half, like the first, was a defensive struggle heavily influenced by the fierce gale — described by the Omaha World-Herald’s Fred Ware as “the biggest wind that has swept the prairie lands since Charley Bryan’s last speech.” In the fourth quarter, the Hawkeyes finally got on the scoreboard. A Nebraska punt into the wind had gone just 20 yards, and Iowa cashed in with a 36-yard touchdown drive. Russ Fisher’s extra-point attempt, however, sailed wide.

Nebraska had a 7-6 lead, but momentum and the wind were on the Hawkeyes’ side. Soon the Huskers faced third and long on their own 32. Nebraska’s Jerry LaNoue lined up to punt. Kicking on early downs was a common tactic in those days, but another short kick at this point could spell doom for the Huskers.

Here is what happened next, as told by the World-Herald’s Ware:

Jerry backstepped to kicking position. He caught the snapback, feinted a kick, then pressing the leather close to his chest struck obliquely down the field, toward the sidelines. He dodged and sprinted 34 yards, and had just that much farther to go for a touchdown when Joe Laws felled him.

With the fake punt, Nebraska was out of danger and then some. In the game’s waning moments, the Cornhuskers nearly registered a safety after a coffin-corner punt by LaNoue pinned the Iowans at their own 4. The game ended with Nebraska in possession inside Iowa’s 10.