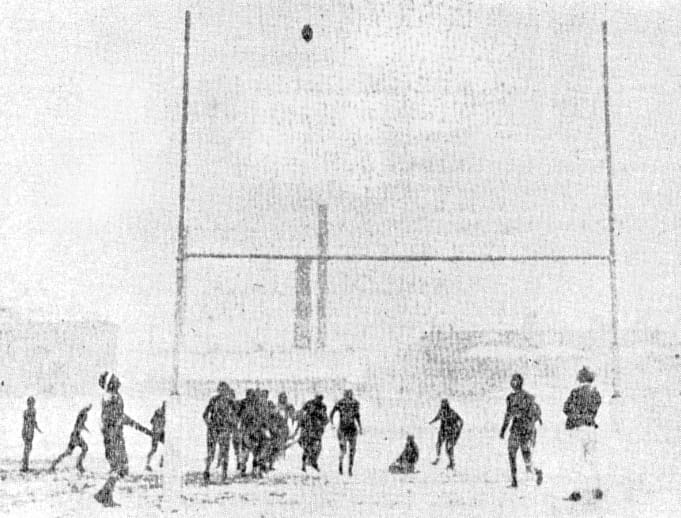 Bobby Stephens’ field goal from the 25 is true, giving Nebraska a 9-7 lead in the third quarter. (Goal posts were on the goal lines, not 10 yards back.)

NYU came to Lincoln, and so did a nasty snowstorm. The result was a Nebraska victory and likely Memorial Stadium records for fewest yards and first downs surrendered by the Huskers.

In a battle of East vs. West, the previously undefeated Violets were held to 16 net yards of offense and one first down in their 15-7 loss.

Dicey footing, an icy ball and frigid fingers made ball-handling difficult. In the first quarter, Nebraska halfback Edward “Blue” Howell lost the ball on a fumble around the NYU 40, and the Violets’ Jack Connor ran it all the way back for a touchdown.

The Huskers answered in the second quarter. Halfback Glenn Presnell fielded an NYU punt at midfield and returned it to the 23. Four plays later, Howell ran through a gaping hole for a 9-yard touchdown. The extra point try failed, and Nebraska trailed 7-6 at intermission. Despite NYU’s undefeated status, this would be an upset if it held up for another 30 minutes. 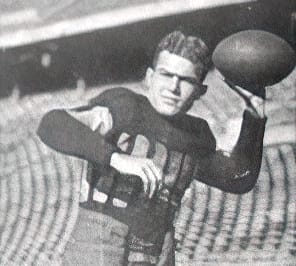 In the third period, another punt return put Nebraska in business. Bob Stephens’ 30-yard runback to the 20 was followed a few plays later by Stephens’ field goal from the 25. Given the conditions, executing the snap, hold and kick was something of a miracle.

Nebraska now led 9-7. In the fourth quarter, the Huskers added an insurance touchdown on a short run by Stephens after NYU fumbled inside its own 20.

In the end, NYU had more punts (18) than yards (16), and neither team completed a pass; Nebraska tried just one, and NYU was 0 for 8. The Huskers managed eight first downs and 110 net yards.