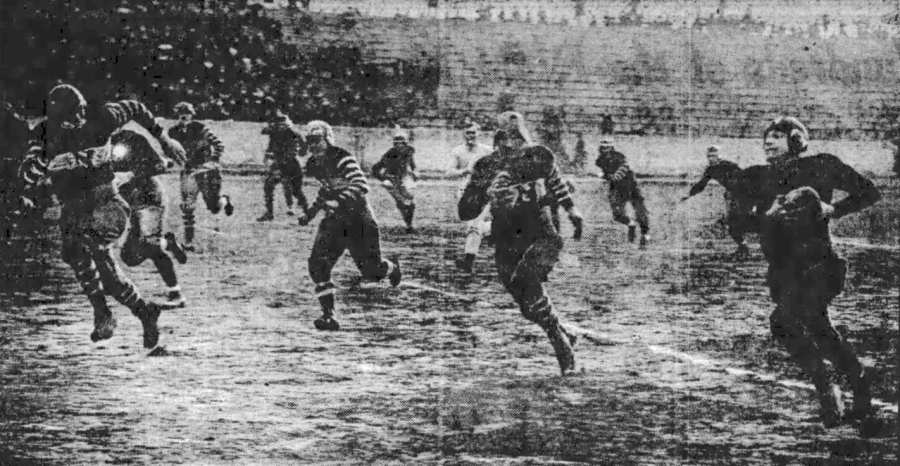 Joe Evans races toward the end zone on a 70-yard pass play that gave Washington the lead in the second quarter. · St. Louis Post-Dispatch · Newspapers.com

Nebraska ended its abbreviated 1918 season on a down note, going down to defeat in St. Louis to Washington University of Missouri. The Cornhuskers scored first, on a 15-yard pass from Paul Dobson to “Link” Lyman, but were shut out the rest of the way. After falling behind, Washington scored two TDs before halftime, including a 70-yard pass play, and added a pair of fourth-quarter field goals.

Nebraska twice got inside the Washington 10-yard line in the second half but came away with no points.

The Huskers played the game despite some grumbling about the eligibility of several key players for Washington, a team coached by former Nebraka captain John Rutherford. 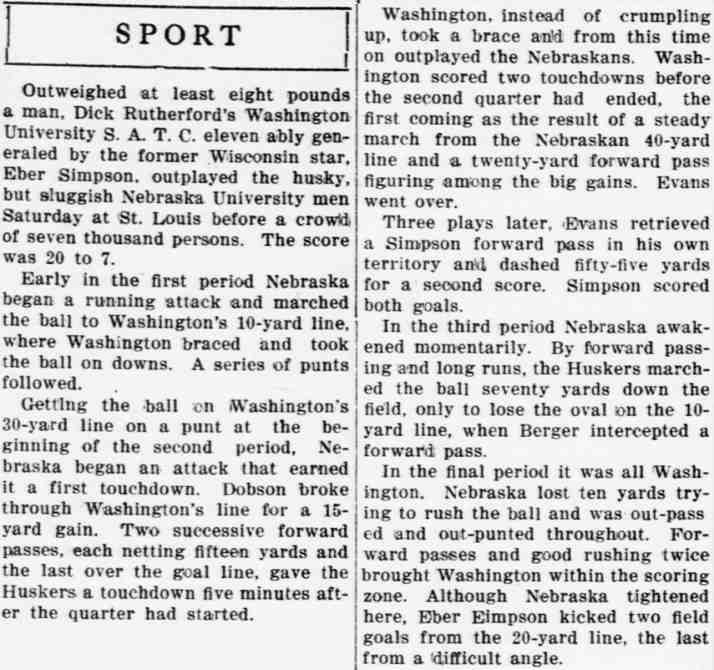 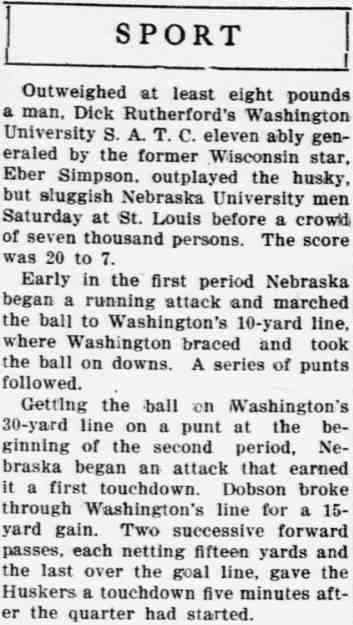 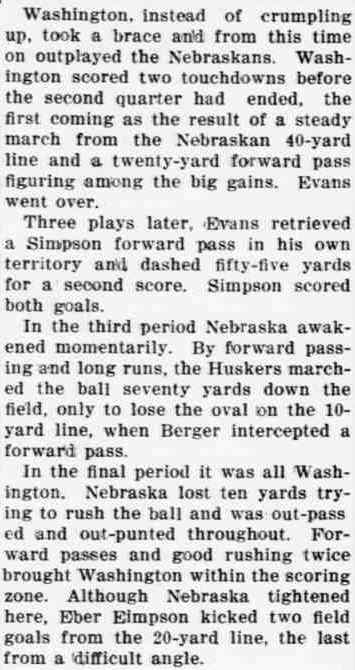 SPORT
Outweighed at least eight pounds
a man, Dick Rutherford’s Washington
University S. A. T. C. eleven ably gen
erated by the former Wisconsin star,
Eber Simpson, outplayed the husky,
but sluggish Nebraska University men
Saturday at St. Louis before a crowti
of seven thousand persons. The score
was 20 to 7.
Early in the first period Nebraska
began a running attack and marched
the ball to Washington’s 10-yard line,
where Washington braced and took
the ball on downs. A series of punts
followed.
Getting the ball en Washington’s
30-yard line on a punt at the be
ginning of the second period, Ne
braska began an attack that earned
it a first touchdown. Dobson broke
through Washington’s line for a 15
yard gain. Two successive forward
passes, each netting fifteen yards and
the last over the goal line, gave the
Huskers a touchdown five minutes aft
er the quarter had started.
Washington, instead of crumpling
up, took a brace arid from this time
on outplayed the Nebraskans. Wash
ington scored two touchdowns before
the second quarter had ended, the
first coming as the result of a steady
march from the Nebraskan 40-yard
line and a twenty-yard forward pass
figuring among the big gains. Evans
went over.
Three plays later, Evans retrieved
a Simpson forward pass in his own
territory an’tl dashed fifty-five yards
for a second score. Simpson scored
both goals.
In the third period Nebraska awak
ened momentarily. By forward pass
ing and long runs, the Huskers march
ed the ball seventy yards down the
field, only to lose the oval on the 10
yard line, when Berger Intercepted a
forwafd pass.
In the final period it was all Wash
ington. Nebraska lost ten yards try
ing to rush the ball and was out-pass
ed and out-punted throughout. For
ward passes and good rushing twice
brought Washington within the scoring
zone. Although Nebraska tightened
here, Eber Eimpson kicked two field
goals from the 20-yard line, the last
from a difficult angle.