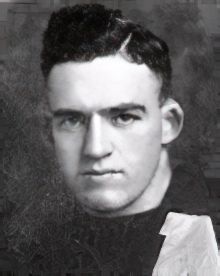 Iowa proved too much for Nebraska to handle as the Hawkeyes tasted victory over the Huskers for the first time since 1899 and did it convincingly, 12-0.

Nebraska’s best scoring opportunity came in the first quarter after a Hawkeye fumble at the Iowa 18-yard line. The Huskers drove to the one-yard line but were turned away on downs.

An estimated 10 pounds per man lighter, the Iowans exploited the Huskers on the ground and via the air.

Nebraska was hindered by Elmer Schellenberg’s illness. Running a fever, the Husker halfback probably shouldn’t have been playing and left the game early in the third quarter, the period in which Iowa did all its scoring.

The game was played before a “much scantier crowd” than expected, with “soldiers predominating as spectators,” the Omaha Bee reported.

It was the final game for two starters, right halfback Harold McMahon and left tackle Al Duteau, who were called to service in the Navy. It would also be the Huskers’ only game until Nov. 9 because of wartime and influenza-related restrictions.