Miami, Fla. (Jan. 1, 1983)—Stung by their own miscues and the ferocious play of the Louisiana State Tigers, the Nebraska Cornhuskers battled from behind for an impressive, 21-20, victory in the 1983 Orange Bowl game.

Nebraska struck early, then suffered an amazing string of uncharacteristic turnovers, before returning to form with a stirring second-half performance.

Civil unrest in the Miami area cut the crowd to 54,407 — there were 14,306 no-shows, the smallest crowd since the 1947 Rice-Tennessee OB game — but those who were on hand experienced unrest only regarding the outcome. It was an exciting show — including a magnificent OB halftime extravaganza featuring the London Philharmonic Orchestra — from start to finish, with the Huskers coming on strong in the late stages of the contest. 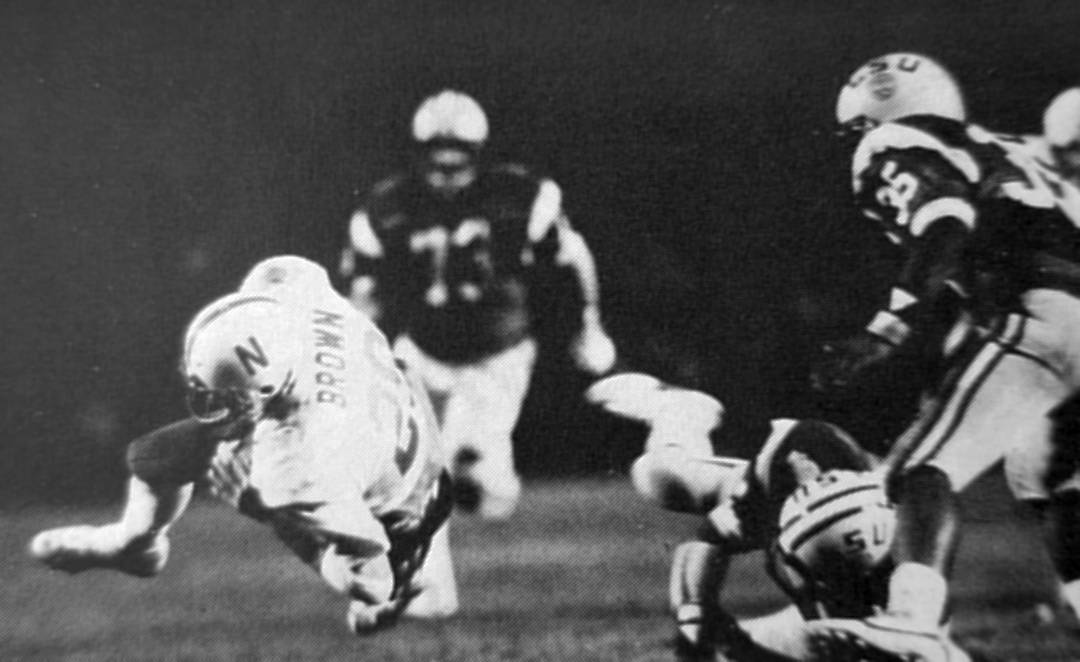 Nebraska, which wound up No. 3 in the nation following the Orange Bowl, came into the game with a slight chance to become No. 1. Only No. 1-ranked Penn State managed to slip by the Huskers and the Nittany Lions met Georgia in the Sugar Bowl. Unbeaten SMU was in the Cotton Bowl, but no miracles came to pass. Penn State won, SMU won and Nebraska won—and that’s the way the polls wound up.

Tough as LSU was, the Cornhuskers came into the game as one of the nation’s finest teams, and the Huskers proved it. After leading 7-0 in the first quarter, Nebraska spent the rest of the first half trying to live down errors. Four turnovers led to a 14-7 LSU lead at the half and the Tigers made it 17-7 midway through the third quarter.

Then Nebraska regrouped with a vengeance. Turner Gill hit Mike Rozier with a 11-yard TD pass to pull the Huskers up 17-14. The Huskers got a break in short order when LSU’s Clay Parker experienced heavy pressure on a punt and decided to run. He missed the first down and the Cornhuskers got the ball at the Tiger 48. It took only eight plays to go the distance and Turner Gill got the final yard on a sneak for a 21-17 lead with 11:14 left in the game.

LSU came back to boot a 49-yard field goal with 5:05 left, but the Black Shirts kept the Tigers in check the rest of the way to hang up victory No. 12.

Perhaps the key play of the game came on Nebraska’s 80-yard drive following LSU’s field goal which made it 17-7. On fourth and one at the Tiger 35, Coach Osborne called for a Turner Gill pass and the All-Big Eight quarterback hit split end Todd Brown with an 18-yard strike. The quick result was a touchdown which put the Huskers back in the game and turned the tide.

Nebraska clearly dominated the game despite the closeness of the score. The Huskers out-yarded LSU, 403-211, with 219 on the ground and 184 through the air.

Mike Rozier was the top rusher in the game with 118 yards on 26 carries, while Wingback Irving Fryar was the Huskers’ top receiver with five catches for 81 yards.

Nebraska’s defense also sparkled, particularly in the second half, and set a school bowl record by holding LSU runners to a mere 38 yards rushing. That broke the old bowl mark of 45 yards set in 1965 against Arkansas in the Cotton Bowl. The Black Shirts also kept heavy pressure on Tiger QB Alan Risher.

While Risher passed for 173 yards, he did it under the gun and managed to hit only 14 of 30 passes and had two intercepted. He was the victim of four sacks.

Orange Bowl Notes … Nebraska is now 5-4-0 in Orange Bowl play, with wins over Auburn, Notre Dame, Alabama and LSU twice. Losses have been to Alabama, Duke, Clemson and Oklahoma … Coach Tom Osborne is 6-4 in bowl play and he’s 1-2 in the Orange Bowl … Nebraska has been to 14 consecutive post-season games and has a 10-4 record since 1969.