Memphis, Tenn. (Dec. 19, 1977) — Nebraska scored twice in the fourth quarter on Randy Garcia touchdown passes to rally and defeat the University of North Carolina 21-17 in the 19th annual Liberty Bowl.

What was to be a running battle between Nebraska’s sophomore running ace I.M. Hipp and North Carolina freshman star Amos Lawrence never developed as both teams demonstrated pinpoint passing and a tough defensive effort to stop the running game.

For the second straight year, the Huskers have rallied during the second half of a bowl game for the win. In 1976, Nebraska trailed Texas Tech 24-14 in the third period but pulled out a 27-24 triumph in the Astro-Bluebonnet Bowl. 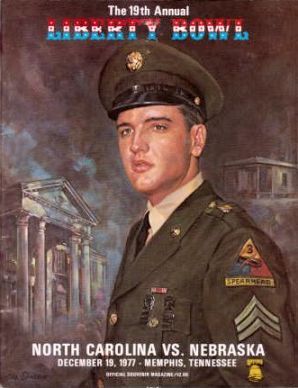 North Carolina struck first following a Nebraska fake punt attempt at the end of the first quarter that failed and gave the Tar Heels the ball on their own 40-yard line. Faced with a third and three situation on the Carolina 47 yard line, an NC tailback pass from Lawrence to tight end Brooks Williams moved the ball to the Huskers 35 yard line.

Nine plays later, with NC on the Husker 12, North Carolina quarterback Matt Kupec passed to Williams, who was free in the end zone, and with the extra point, Carolina led the favored Huskers 7-0, at 13:52 in the second quarter.

But Nebraska came right back and scored on a drive that took six plays and covered 64 yards.

On the first play of that drive with the ball on the Husker 36 yard line, quarterback Tom Sorley connected with split end Tim Smith for 22 yards, moving the ball to the NC 42. Three plays later, at third down and three on the Carolina 35, Husker fullback Dodie Donnell popped up the middle for 17 yards, to the North Carolina 18. Then, two plays later, Donnell again broke free, this time from the Carolina 15, for the touchdown, and with the extra point, Nebraska had tied it 7-all.

But North Carolina took a 14-7 lead into the lockerrooms when following Donnell’s score, NC took the ball 83 yards in 19 plays for its touchdown. With a second and nine situation on the Husker 10 yard line, Kupec hit fullback Bob Loomis in the end zone, and again the extra point was good, making the score NC 14-NU 7.

Before Nebraska got rolling in the fourth quarter, North Carolina increased its lead to 17-7, following a 47-yard field goal by Tom Biddle with 4:28 left in the third quarter.

Nebraska’s defense got things started for the Huskers in the fourth quarter, when with NC on the Huskers 23 yard line, Kupec’s pass was tipped by NU linebacker Lee Kunz and intercepted by defensive tackle Barney Cotton. Exit the Blackshirts and enter Garcia. 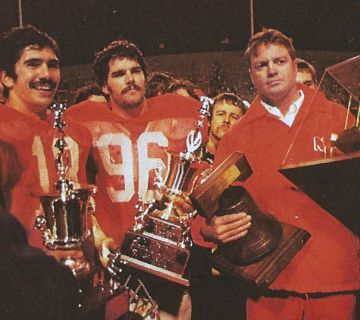 The Huskers’ scoring drive started from their own 26 yard line and 10 plays later they were on the NC 10. From their, on a first and 10 situation, Garcia passed to wingback Curtis Craig all alone in the end zone, to make the score 17-14 following the successful extra point.

Disaster almost struck the Huskers with 8:10 to play, as NU fumbled a North Carolina punt at its own 26 yard line, which was recovered by the Tar Heels.

But the Husker Blackshirts rose to the occasion again as Kupec, facing a fourth and seven decision at the Nebraska 23, faded back to pass and fumbled, as the ball was recovered by Husker defensive tackle Dan Pensick at the Nebraska 43-yard line.

For the game, Garcia was 3-3 for 56 yards and two touchdowns, while NU starting quarterback Sorley was 11 for 13 for 105 yards and his .846 completion record was a new Husker bowl game record.

Another fine quarterbacking job was turned in by NC’s Kupec, who completed 7 of 11 passes for 75 yards and two touchdowns, and for his effort was named the Player of the Game.

Nebraska’s victory was the Huskers’ second straight bowl win and the eighth in their last nine consecutive postseason appearances.