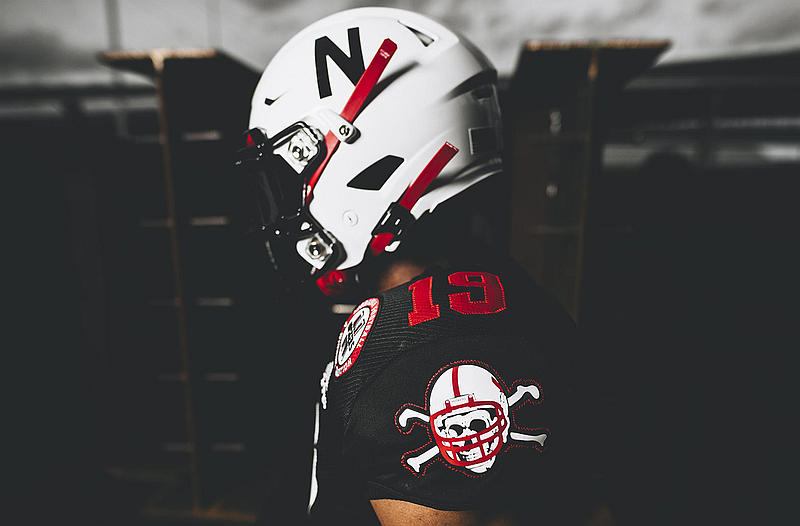 Nebraska and Adidas released the alternate uniform the Huskers will wear at some point in the 2019 season.  I can’t help but feel like I’ve seen it before – and no, I’m not talking about the photo* that leaked out from the hype video shoot a few weeks ago.

*How mad do you think the Adidas folks were about this image stealing their thunder?  The one time they shoot the hype video on location – instead of from the comfort of their ad agency’s studio – and the full uniform leaks out.

How familiar are these uniforms?  Here is how I feel like the design process went for this year’s alts:

Account Rep:  Hey, Nebraska wants their alternate uniform to be black this year.  I don’t have a lot of requirements, other than they want to release it in time for their Fan Day in early August.

Lead Designer:  Um…It’s the middle of summer.  There is no way we can create a black alternate uniform in time.

Account Rep:  Don’t we have a single alternative uniform template that we use for colleges?  Usually the only thing you guys do is update the colors and logos, and send it off to the factory in Asia.

Lead Designer:  We’re trying to get away from that.  The guys on the Basketball Design Team were making us look bad.

Account Rep:  So what can we do?  Scott Frost has a history with Nike, and his A.D. has a policy to never tell Frost “no”.  Nebraska is our oldest, and one of our best clients.  Surely we can do something for them.

Design Team Intern (flipping through a book of previous Nebraska uniforms):  Look at these black uniforms they wore back in 2013.  What if we clean these up and pass them off as new?

Lead Designer:  Hmm…that could work.  There is definitely room for improvement on these.  Maybe incorporate some elements from their current practice jerseys.  What do you think?

Account Rep:  I really don’t care what they look like, as long as we can debut them before the season starts.

Lead Designer:  That’s what we do best!  We’ll have a sketch ready by the end of the day.

How similar are the new set to 2013?  Here is a side by side comparison (image by @BrettSBaker)

As is the custom, we’ll go from the top down.

The improvements from the 2013 set start at the top.  Adidas got rid of the weird gradient facemask that was black on the outsides and red in the middle, and replaced it with a basic black facemask that works much better.  Nebraska’s signature sans-serif “N” remains, but it is now black instead of red.  Both the 2013 and 2019 versions have a black helmet stripe that is noticeably thicker than normal.

Our video model has a red chinstrap, which I would suspect gets swapped out for black or white when the players get them.

I would have been okay with Adidas being a little more aggressive in their design on the helmet.  Possibly a black helmet with white “N”, or even the script Huskers in black instead of the helmet N.  That said, I have no issue with the lid.

Yes, I am an unabashed old-school fuddy-duddy who thinks Nebraska’s uniforms are fine as they are, thank you very much.  But there is more to my dislike than me being averse to change.  My biggest objection is the black jersey, for two primary reasons*:

*Why yes, I did plagiarize and update my 2013 review of Nebraska’s uniforms for the preceding three paragraphs.  Hey, if Adidas gets to pass off old material as new, I can too.

The good news is my stance has softened a little bit since 2013.  While I still think only the first team defense should wear black, I really do like this version.  Adidas abandoned the “tire tread” motif, and they got rid of the numeral font that looked like it came from “The Longest Yard”.  I have my concerns about using red for the TV numbers on the shoulders and name on the back – but that is more about being able to read them from Row 47 instead of a stylistic concern.

My biggest gripe is the use of the Blackshirts logo on the sleeves.  In the press release, Adidas tries to spin it as “personifying the players’ relentless attitude, a skull-and-crossbones logo sits on the jersey’s sleeve caps”.  Filter out the b.s. and the takeaway is “we understand that this is a defensive logo, but it still looks cool, and we hope prospective recruits agree.”

Overall, I understand why black jerseys are popular.  And if Nebraska “needs” a black jersey, this is a pretty good version – even if it cheapens what “Blackshirts” once meant.   Allow me to plagiarize myself from 2013 one more time:  “Black will always be a cool color for young males, as it denotes toughness and strength.”  I guess that applies to third string wide receivers too.

When it comes to the pants on their alternate uniforms, Adidas has really embraced a “less is more” approach.  I would have been okay with the 2013 version, with its black leg stripe and over-sized “N”.  Instead, it looks like Nebraska will wear their regular white pants.

At the risk of being alarmist, seeing the new jersey paired with the regular pants makes me a little concerned that this new ensemble will be used a more of a “third jersey” than a one time only alternate.

I really like Scott Frost, and I love how he is bringing the things he learned at his previous coaching stops back to Nebraska.  But I have no desire to see Nebraska getting into the mix and match “uniform system” that Central Florida has, let alone the weekly game of one upsmanship that Oregon plays.

In the hype video, we see three different Adidas accessories get some extended screen time.

Put it all together, and this is what it looks like from head to toe.

A big part of grading the alternates that Adidas produces for football is managing expectations.  With 2019 being the 150th anniversary of college football, and the 150th anniversary of the University of Nebraska, I had hoped for some sort of 1969 throwback uniform.  So from that aspect, I’m a little bummed at the missed opportunity – even if Nebraska wore a “fauxback” uniform last year.

When I first saw the leaked image, I was disappointed.  I’m not a fan of NU wearing black, and let’s be honest – the overall look is little more than tweaks to the 2013 alt.

But the more I look at it, the more comfortable I am with it.

Why?  Indulge me in one more flashback, this time to Nebraska’s last attempt at black – the horrifically bad 2015 set:

I could get on-board with an all-black get up similar to this.  Just simplify the look.  Lose the tire treads, the reflective numbers, the stripes that look like they survived an attack from Freddy Krueger, and you’d really have something nice.

It may not be as #HuskerBold as adidas would like, but I’d wager it would be better received.

Give Adidas credit. They checked all of the boxes and made an alternate uniform that should appeal to the coveted kids as well as the cranky traditionalists.  That is a win in my book.

Dave Feit lives in Lincoln, and has been writing for HuskerMax since 2012.  Additional thoughts on the Huskers (and everything else) can be found on his site: www.feitcanwrite.com