Adam Carriker breaks down Erik Chinander's defense at Central Florida and what his defense at Nebraska will look like in 2018.
Continue On
Tag: Carriker Chronicles

Carriker Chronicles: What to expect from Frost’s offense in 2018

Former Husker Adam Carriker talks about what to expect Nebraska's offense to look like in the first year under new head football coach Scott Frost.
Continue On
Tag: Carriker Chronicles 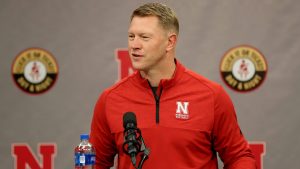 Scott Frost is back in Orlando with his family this week, taking a long-deferred rest as his assistants also grab some well-earned time off. While Nebraskans shovel persistent February snow, Frost is digging out from all the “Coach of the Year” awards and accolades he earned at UCF. There was no time for that until now — certainly not while…
Continue On

Video: Adrian Martinez and Will Honas on choosing Nebraska

• Huskers Illustrated: QB Martinez says teammates have taken him under their wing
Continue On 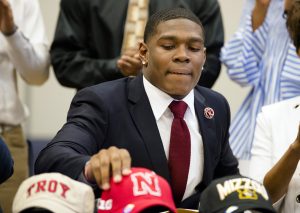 • Go to HuskerMax's Class of 2018 page for details on each player, including video highlights and additional coverage of their recruitment and signing.   Coverage • Omaha World-Herald:* Frost 'not here to win February,' confident first Nebraska recruiting class will have on-field success • Lincoln Journal Star: Frost: "I'm not here to win February" • Nebraska Athletics: Signees and…
Continue On

As Husker fans we have insane expectations. Some might even argue that they are unrealistic expectations. As a self-aware homer my tendency is to disagree, but I think it's important to keep this year's recruiting class in perspective. My heart says, "We get everyone left on our board, rank inside the top 20 and win 2 national championships next year".…
Continue On
Tags: Huskers podcast Recruiting 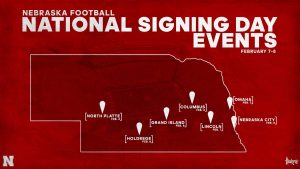 The Nebraska football coaching staff visit several Nebraska cities following Signing Day to discuss the 2018 recruiting class, with events set Wednesday, Feb. 7 and Thursday, Feb. 8. The Husker coaches will spend time discussing the newest members of the Husker football program, and fans will have an opportunity to see video highlights of each of the signees. The…
Continue On

Well, this was a cheery week. All sorts of fun topics like Michigan State and how we as Husker fans should view that whole nasty situation. Also, we talk Husker football winter conditioning. Is Zach Duval going to murder a Husker with his workload, and can he possibly do the same to Tweedy? PLEEEEAASE? Seriously, we're trying to get everyone…
Continue On
Tags: big red cobcast Michigan State Nebraska Nebraska football Nebrasketball Pat Janssen Ryan Tweedy Scott Frost Tyjon Lindsey

Adam Carriker gives his early take on the Huskers' 2018 football schedule and what Scott Frost and Nebraska need to do for a successful first season.
Continue On
Tag: Carriker Chronicles

Guys, things are getting chippy in Cobcast land. We're tired of no football. We're tired of each other's coffee breath. It's time for April to get here. But that doesn't mean there isn't plenty to talk about this week. And talk about it we do! On this list of this week's topics are CTE (and the possible salvation of football),…
Continue On
Tags: big red cobcast Huskers joe canale Nebraska Pat Janssen Ryan Tweedy Scott Frost Tim Miles 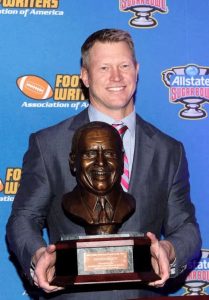 There’s an old saying in sports that goes something like this: “It’s players, not plays, who win championships.” Scott Frost’s success at UCF — at least on the offensive side of the ball — challenges that wisdom. It’s certainly not the way it played out in Orlando last fall. UCF put together a 13-0 season while leading the nation in…
Continue On

Former Husker Adam Carriker talks with former Nebraska defensive coordinator Charlie McBride about coaching the Blackshirts, how Nebraska can improve on defense in 2018 and more.
Continue On
Tag: Carriker Chronicles

It would be hard to imagine a better start to Scott Frost's first year as the Husker head football coach. Before he left for Nebraska, Frost took a program at Central Florida that was in shambles and turned them in to winners in just two seasons. Let's look at what Frost accomplished in his two years as the Knights' head…
Continue On

Former Husker Adam Carriker shares anecdotes about his playing days with Barrett Ruud and tells why he is a good addition to Scott Frost's Nebraska football coaching staff.
Continue On
Tag: Carriker Chronicles

I honestly can't tell what the prevailing sentiment is. Are Nebraska fans howling for UCF to be co-national champions because anything tied to Scott Frost feels like it partially belongs to the Huskers? Or are they up in arms because they understand fairness and recognize when it's not being employed properly? Maybe I can't tell because it's a little bit…
Continue On
Tags: alabama big red cobcast college football playoff Huskers Nebraska Scott Frost sec

I had almost forgotten how it feels to watch a Nebraska football coach cover himself and his team with honor during a big New Year’s Day bowl game. How about you? I sure could get used to this again. Wait, you mean that wasn’t a Nebraska game? Looking at UCF’s tremendously exciting 34-27 Chick-Fil-A Peach Bowl win over Southeastern Confrerence…
Continue On
Tag: Scott Frost
« Previous 1 2 3