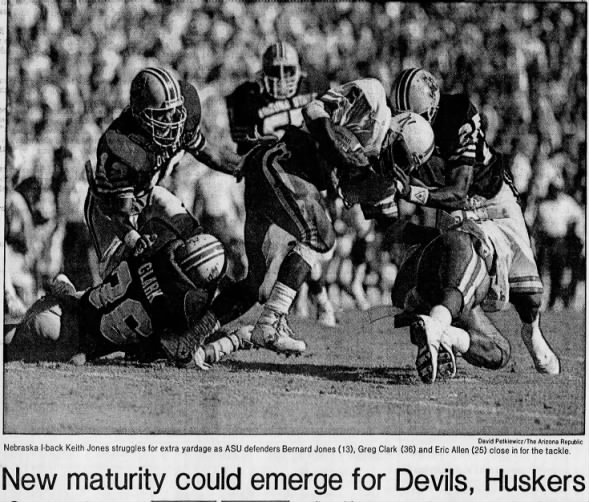 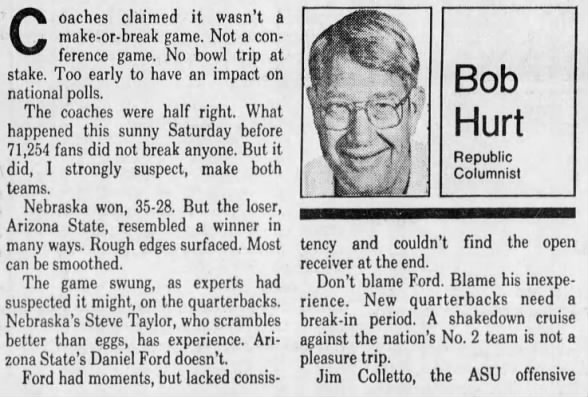 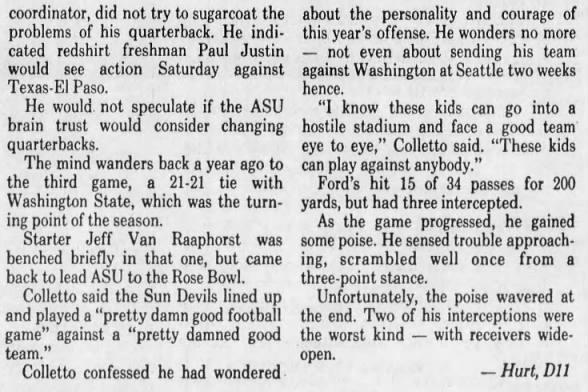 New maturity could emerge for Devils, Huskers
C oaches claimed it wasn’t a make-or-break game. Not a conference game. No bowl trip at stake. Too early to have an impact on national polls. The coaches were half right. What happened this sunny Saturday before 71,254 fans did not break anyone. But it did, I strongly suspect, make both teams. Nebraska won, 35-28. But the loser, Arizona State, resembled a winner in many ways. Rough edges surfaced. Most can be smoothed. The game swung, as experts had suspected it might, on the quarterbacks. Nebraska’s Steve Taylor, who scrambles better than eggs, has experience. Arizona State’s Daniel Ford doesn’t. Ford had moments, but lacked consis- Bob Hurt Republic Columnist tency and couldn’t find the open receiver at the end. Don’t blame Ford. Blame his inexperience. New quarterbacks need a break-in period. A shakedown cruise against the nation’s No. 2 team is not a pleasure trip. Jim Colletto, the ASU offensive coordinator, did not try to sugarcoat the problems of his quarterback. He indicated redshirt freshman Paul Justin would see action Saturday against Texas-El Paso. He would, not speculate if the ASU brain trust would consider changing quarterbacks. The mind wanders back a year ago to the third game, a 21-21 tie with Washington State, which was the turning point of the season. Starter Jeff Van Raaphorst was benched briefly in that one, but came back to lead ASU to the Rose Bowl. Colletto said the Sun Devils lined up and played a “pretty damn good football game” against a “pretty damned good team.” Colletto confessed he had wondered about the personality and courage of this year’s offense. He wonders no more not even about sending his team against Washington at Seattle two weeks hence. “I know these kids can go into a hostile stadium and face a good team eye to eye,” Colletto said. “These kids can play against anybody.” Ford’s hit 15 of 34 passes for 200 yards, but had three intercepted. As the game progressed, he gained some poise. He sensed trouble approaching, scrambled well once from a three-point stance. Unfortunately, the poise wavered at the end. Two of his interceptions were the worst kind with receivers wide-open. Privately, Ford broke down in tears after the game. Frozen in his memory will be a ‘first-quarter pass. It looked like a 30-yard touchdown about to happen. Aaron Cox stood in the end zone, 5 yards away from the nearest defender. Ford threw directly to that defender, Nebraska’s Mark Blazek. With 2:38 left and ASU behind by seven,-Cox was streaking free down the middle. Ford failed to spot him, instead forcing a pass to Darryl Harris on the sideline. It was intercepted. Cox again was free and unnoticed ” on a streak route with 30 seconds left. It’s unfair to expect Ford to match the , veteran Huskers quarterback. (Taylor is something else. He weighs 195 pounds but scrambles like Fran Tarkenton. Ford was not the only one making mistakes. .’ Larry Marmie, the ASU defensive coor- -dinator, said he had his team in the wrong alignment on the 62-yard Keith Jones run that set up the winning touchdown. He also blamed himself for Nebraska’s fake field goal that led to its third touchdown. The officials made a few boo-boos, too. Scratch that. Officials don’t make boo-boos. They make marginal calls. One was an illegal receiver penalty that nullified a 66-yard Nebraska scoring pass. That was picky. So was a key roughing penalty called against ASU and one that was not called against Nebraska. t Sure, Ford misfired early on two easy third-down passes. Don’t forget, however, ;that Sun Devil Tony Johnson dropped Ford’s 14-yard strike in the end zone moments later. Enough of this nit-picking. What we had here in Tempe, in this green griddle between the buttes, was a good football game. Frame it and hang on the wall. Or put it on steel videotape and save it posterity. It had big hits and big plays, spiced with interesting strategy and highlighted by courage from both teams. ASU came back to tie three times. Nebraska, which was supposed to pucker in the clutch or wilt in the heat, instead met the challenge. The experience will help the Huskers.