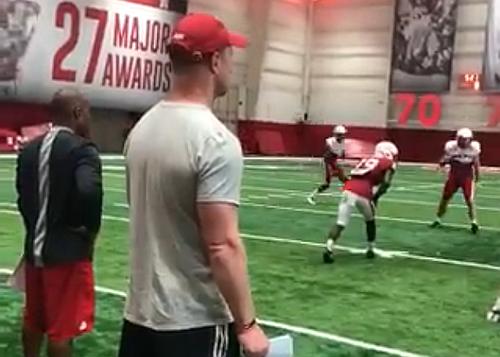 The Big Ten Network’s BTN Bus arrived in Lincoln for Monday morning’s practice. Here are videos and images from the BTN crew members as they watched the practice, plus interviews and other features that aired Monday evening on the network. | Jump down to latest video | Return to Monday’s practice report

How can it be Frosty in August? ❄️

It's possible here in Lincoln as the 🚌 pulls up to @HuskerFBNation practice: pic.twitter.com/JurHBCYHF6

Coach Ryan Held just stopped by to fill us in on his RB’s – “starting to get guys who create match-up problems.” Outstanding frosh Wan’Dale Robinson is #1 here. They are very high on Ronald Thompkins (green jersey) – will sit out this year pic.twitter.com/ETZgubgfeZ

Nebraska is getting after it early and bumping everything from Aerosmith to Nipsey Hussle. Happy Monday ❄ pic.twitter.com/9J8D6WPLtV

Lot of talk about the improvement of the DL – here’s a look at that group pic.twitter.com/6EW8lRG3yY

Overall observation watching Scott Frost’s 2nd ⁦@HuskerFBNation team ⁩ – this is a MUCH better looking team physically than a year ago. Have made major strides pic.twitter.com/o56SgXnx8a

Tremendous visit to Nebraska culminating in some Husker hospitality. Thanks to ⁦@valentinospizza⁩ and ⁦@Runza⁩ for the delicious lunch spread! pic.twitter.com/OLDuEi0Eax

This QB needs no introduction, and he's now the face of @HuskerFBNation on the BTN Bus. 🌽

BTN Bus Tour Stop 11 @HuskerFBNation The B1G West could be the most balanced division in the college football. Some thoughts about practice. pic.twitter.com/O3gY19p4YF

BTN Bus Tour Stop 11 @HuskerFBNation I thought Neb was over rated picking them to win West & it was just sign of the confidence people have in @coach_frost Based on how they've improved physically & QB depth theres lots of reasons 2 pick them Some "Sights & Sounds"todays practice pic.twitter.com/A3Cv2goAcZ

"Our entire team just jells around him; you would think that he's the starting quarterback of our team."@HuskerFBNation stars rave about @coach_frost. pic.twitter.com/lkALLjqwLb