The Story Behind “Hail Varsity” and the “Band Song” 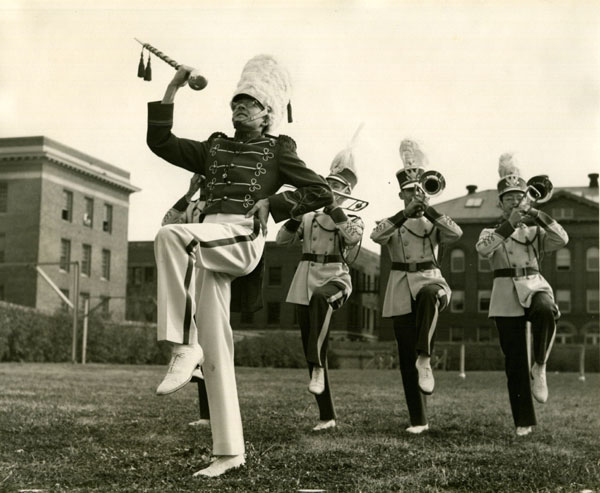 with contributions from the Wolf and Tollefsen families

Everyone is familiar with the NU fight song “Hail Varsity” that is played by the Cornhusker Marching Band at every Huskers game. “Hail Varsity” was composed in 1936. The lyrics were written by Joyce Ayres, a 1930 Nebraska graduate, and the music was composed by Wilbur Chenoweth.

However, “Hail Varsity” was not played before or during Nebraska’s game against Stanford in the 1941 Rose Bowl because of a nationwide strike by the American Society of Composers, Authors, and Publishers (ASCAP), a music licensing organization that pays royalties to composers of licensed music.

The Wolf family was very instrumental (pun intended) in the creation of the “Band Song” and being part of the Cornhusker Marching Band through generations. Special thanks to their family friend Tay Tollefsen for bringing this to our attention and allowing us to share the story behind the “Band Song” with you.

I enjoyed band in high school and I was encouraged by the Kearney High School band director, Arthur Harrell, to try out for the University Varsity Band.  After playing for Donald Lentz, the UNL band director, Lentz chose me for the Varsity Marching Band.  That was unusual for a freshman and I felt very fortunate.  Most freshmen started in the Freshman Band, an Army ROTC band, and it played for ROTC formations.  Instead, I got to play in the BIG band.  The Varsity band had the fancy red and white uniforms and marched at football games.  My marching position was H-1. This meant I marched in the front row, column H (left corner of the band).

We marched on the football field before the game, then performed at half-time.  The band had prime seating in the center of the east stadium for the games.

To my surprise, my very first year at the University, the Cornhuskers played Stanford in the Rose Bowl. Our whole band went to the Rose Bowl at the University’s expense.  We took a special train to California, and had a side trip to Juarez, Mexico.  The band stayed in a hotel in Los Angeles.  On New Year’s Day, the Rose Bowl parade was 8 miles of marching and playing.  Then we went to the game and performed a half-time drill.  The next day we went to San Francisco for a day, then rode the train home to Lincoln.

The train would stop along the way at little towns for fuel, food, rest, etc. and the band would get out and play “Hail Varsity” and “There Is No Place Like Nebraska” for the local citizens.   The local people were thrilled to hear the huge UN Marching Band and the unexpected LOUD band music in their towns!!

We were on the train to California and we had a problem.  ASCAP had an order out to prohibit the playing of any music licensed by that organization (including “Hail Varsity”) from being performed in a public place.  There was some conflict going on about royalties.  That eliminated a bunch of our regular music!  So, a small group (less than 7 or 8) sat together on the train and wrote the “Band Song”.  I was there and probably made a suggestion, but I was not one of the principals.

Sound Out! Sound Out!
Sound out loud and clear
Let the team all know the Band is here.
Sons of Old Nebraska
If someone should ask ya
We’re the Scarlet and the Cream!

Pat McNaughton, a graduate student, was the Varsity Band Drum Major during my freshman year and during the Rose Bowl game.  The summer after the Rose Bowl game, he left the University to take the job as assistant to William Revelli, the Band Director at the University of Michigan.  Our director, Don Lentz, had try-outs for a new drum major, and chose me.  My only prior experience as Drum Major was leading the Junior-Junior drum corps in Kearney.  Arthur Harrell, the Kearney High School Band Director, asked me to take over the youngster drum corps while he directed the regular drum corps.

With that new title, I immediately moved from fourth chair trombone to first chair in the concert band!  As drum major, I helped Don Lentz plan and write the directions for the band’s half-time performances.  We used a large table in the School of Music, marked as a football field.  The table looked like graph paper, squared off to represent the length of one step.  The big surprise with my new job was discovering it was a paid position.  The drum major was by definition an assistantship in the School of Music.  The two chores were being drum major and being a teaching assistant in harmony.  So another teaching assistant and I arranged to split the duties and the pay!  I enjoyed being drum major.  It made me one of the better-known students at the university.

DeWayne Wolf served as NU Drum Major the next three years until he was called to active duty in the U.S. Army in April 1943.  He served as a “computer” in the Fire Direction Control Center for a field artillery battalion in General George Patton’s Third Armored Division.

After WW2, DeWayne went to law school at the University of Michigan, became an attorney in Kearney in 1948, then was appointed State District Judge in 1976 by Governor Jim Exon.  Judge Wolf retired from the bench in 1990, but was the proud owner of four seats in Memorial Stadium for all home football games, so he and his family could watch both the band and football team perform on the field.

I picked up the trombone in fifth grade. I had no idea that my grandpa (DeWayne Wolf), uncle (Chuck Wolf), and cousin (David Wolf, Chuck’s son) had played it; I just thought it was a cool instrument and wanted to prove that I could be as good as the boys.

In high school (Lincoln Southwest), I was in the marching band, concert band, and jazz band. My senior year of high school (fall 2011) I was one of the drum majors for the marching band. I was proud to have been a drum major like my grandpa. My older brother (Andrew Wolf), who was a percussionist, also played in the marching band in high school and played in the Cornhusker Marching Band (CMB) in college. Our dad, although not a University of Nebraska – Lincoln alum (he was a University of Nebraska – Kearney alum), was an avid enthusiast of the CMB. Every game day he would listen to the band’s warm-up in front of Kimball Hall. Then he moved to ‘his spot’ along the path that the band marches down to the stadium and would cheer on the band as they marched by. From there he would find the seats that my grandpa had season tickets for, in time to see the band’s pre-game show. It was a tradition my mom, brother, and I kept, especially after my dad’s death in 2004. While my brother was in the CMB (fall 2006-2009), my mom and I stood in Dad’s spot and cheered him on as he marched by. While I was in the CMB (fall 2013-2015), my mom and brother stood in that spot and cheered me on.

My junior year of college, my brother decided to make up what we call ‘The Becca Dance”, and when I marched by chanted “Becca Becca Becca Becca Becca…” The trombone section decided to do it with him every time we marched by. They still do it today. As you may have noticed, I was not in the CMB my freshman year of college (fall 2012). I was a civil engineering major and was not convinced that I would be able to juggle the class load and marching band. I was right. However, I also found out that civil engineering was not for me. That spring semester I switched majors and played in the Campus Band, which is one of the concert bands. I was much more happy and confident with my new major and auditioned for the CMB in the fall (2013). I auditioned for F rank (second part) but when asked if I would be willing to switch ranks if necessary, I said yes. I made the band but was switched to G rank (third/bass part). I was actually happier about that because I had played the third part in high school and really enjoyed it. I also liked that I was the only girl in G rank and they made a big deal out of it.

That night (every year after auditions) when the final roster is posted, we have our first meeting as a band and at the end we sang and played through the Band Song/Hail Varsity. I teared up, knowing that my grandpa had helped write the Band Song. After that year I auditioned and made the band my junior and senior years of college. The summer of my junior year (2015), my grandpa passed away, so my senior year I carried the photo of him in my shako (hat). The last home game of the season, I had a photo taken of me holding it, which is the photo my uncle sent you.

It was an honor to be in the CMB and carry on the family tradition of being a member, following the footsteps of my grandpa and my older brother. Every time we sang the Band Song, I sang with gusto. Now, as a CMB alum, I have gone back to play with the alumni band at the alumni game the last two years. I am also a Life Member of UNL’s Band Alumni Association. I hope to continue to play with the alumni band every year I am available until I can’t hold up my trombone or buzz my lips. The CMB and the friends I made were family to me and always will be. I have stayed in touch with two of the other female trombonists, ‘bone chicks’ as we are called. The early mornings and long days of band camp were worth every second. Getting to represent the Pride of All Nebraska, traveling the country to away/bowl games with my friends, and playing my horn was and is very special.

Thanks to the Wolf family for being a part of the creation of and the playing of the “Band Song” for generations.

Watch this You Tube video (and sing along!) with the 2012 Cornhusker Marching Band performing the “Band Song” and “Hail Varsity” as the band proudly marches down 10th Street to Memorial Stadium.

For more information about “Hail Varsity,” read this story by Joe Hudson.