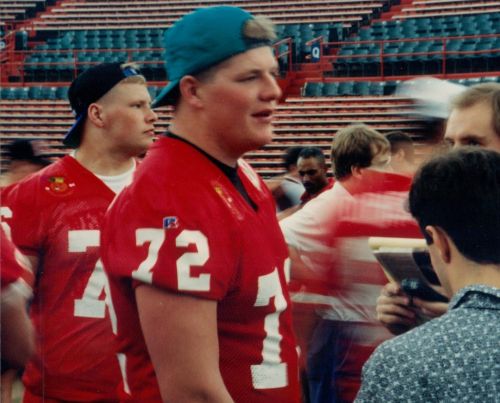 Excerpted from Chapter 10, No Place Like Nebraska: Anatomy of an Era, Vol. 1 by Paul Koch

No great thing is created suddenly, any more than a bunch of grapes or a fig…I answer you that there must be time. Let it first blossom, then bear fruit, then ripen.

Born in Fremont, Nebraska in 1903, Harold E. Edgerton studied to become an electrical engineer and later invented the stroboscopic (strobe) light. Only a curiosity to some, the strobe has been used to give the illusion of slow motion action, catching a series of movements as singular moments-in-time. Fellow Fremonter Zach Wiegert, for one moment in time in 1994, was considered the best lineman in all of college football.

Playing on the strobe theme, its most notable common day application is its use on aircraft wings to act as anti-collision devices. Think of the U.S. Navy’s precision aviation team the Blue Angels, and you get the idea of what kind of oneness of mind and interplay among team members it took the Nebraska Offensive Line to turn the X’s & O’s into touchdowns rather than crashing & burning for constant three and outs. Let’s hear from Red Husker group leader Zach Wiegert, call sign: ‘The Slug’, on his impressions of that era…

Where are they now? Omaha, Nebraska, Entrepreneur

Question: Hey Zach, I was talking to Dave Ellis the other day about leadership and he happened to bring your name up.

Zach Wiegert: Wow, that was nice of him to do that.

Q: Now, I know you followed your brother Erik to Nebraska. Did that connection help you?

ZW: Oh yeah, we lived together in college, and obviously I had a chance to meet Coach Tenopir and Coach Young and Coach Osborne a few times before I’d gotten to campus there. I met all those guys before I even got down there, so I think Nebraska had a huge advantage of me wanting to go there rather than somewhere else.

Q: Were you really getting pushed by a lot of other schools to leave the state?

Q: Incredible. Because of your older brother Erik’s influence, did you feel like you had a leg up on some other guys who were just coming onto the scene?

ZW: Well, just being close to home and knowing a lot of the guys who were already offensive linemen on the team, as far as relationships. I knew a lot of people who were already there, although I don’t think anything can really prepare you to go from a Class C school to the University of Nebraska and playing Division 1 ball, physically, but it just helped to see how some of the other guys you already knew were playing.

Q: Sure. Do you recall anything about your first day on campus, strapping them on? Anything stand out as far as surprising you?

ZW: The thing that stood out to me the most was that I was playing better than I thought I would be able to at that level. Because you come from a small school in Nebraska and then you watch Nebraska play on TV growing up and you think, ‘I got a scholarship and now I have to get so much stronger and bigger’ and all that. And at the time they still had freshman football, so a week into fall camp they decide not to play Brenden Stai and Rob Zatechka and myself in freshman football, but to redshirt us instead. So right there you could see they thought, “Hey, these guys can play already. In a year they could be ready to play.” Before that you were usually on the freshman team and then redshirted your second year and then played.

Q: What year was your freshman year?

Q: So your experience that year was where we ended on a bit of a sour note and finished with that loss to Georgia Tech in the Citrus Bowl. Is there anything from that year that stands out to you compared to your national championship senior year?

ZW: I just think that you went from having leadership positions on the team –and obviously we were fortunate to have some classes who had a lot of talent and a lot of those guys developed that talent when they were there- but I think you went from having a lot of the leadership from the skill position guys, the running backs and quarterbacks, the linebackers and DB’s, but my junior and senior year and even a couple of years after that -we had skill players- but the leadership came from the offensive line and the defensive line.

Not that we were in the press the most or talked about the most, but when it came time in the game we could rely on the offensive and defensive lines to shut the other team down and do what it takes to win. We were physical up front and that’s what made us leaders of our team. I think if you ask any coach, that’s where they’d want the leaders as far as positions.

Q: I can’t remember who it was told me recently, but they said that after the two point loss to Florida State a bunch of you guys got together and made a pact that you’d never ever let the outcome of a game be that close again, that you’d never leave it up to a kicker’s round foot hitting a round football to determine the difference between a win and a loss. Do you remember that?

ZW: Yeah, it was right after the game. (laughs) Guys were depressed, and later that night we were all hanging out and saying that it should never come down to a field goal, that we want to be the ones on the field controlling our destiny and not on somebody kicking a ball.

Q: Can you bring me back to that conversation? Who was there? Where did it take place?

ZW: You know, I think Trev Alberts was part of that conversation, him being a senior, and Kevin Raemakers was around. And those guys were a year older than us –and you felt terrible for them, because we totally out-played Florida State in that game, and everyone who watched it knows that they deserved to win the national championship their last game of their senior year.

I think we were sitting around the Sheraton Bell Harbour, our hotel there in Miami. We were sitting around and going over the plays and we said, “You know what, next year we’re working our way back here and we’re gonna be undefeated and we’re not going to leave it up to some field goal kicker. We want to be on the field with a lead at the end of the game running the clock out.” It was a mix of guys like Terry Connealy and Christian Peter -but you just kind of got that feeling looking at those guys who should have won the national championship and felt sorry for those guys- and it was taken away from them on a field goal? And it shouldn’t even have come down to that. To see them lose? We didn’t want our senior year to end like that.

Q: Bryan Pruitt said he was in on that last second kick by Byron and that beforehand the Florida State players were cursing at Coach Osborne and hurling f-bombs at him to get off the field and all. If I recall, you really took umbrage to that. Do you remember that scene?

ZW: Yeah, I was actually talking to Coach Osborne about that the other day. (laughs) For me, being a kid from Nebraska and always looking at Osborne as a kid and kind of idolizing him –and my grandfather was actually one of Coach Osborne’s coaches at Hasting College…

ZW: Yeah, so I know how good a person he is. Not just as a football coach, but just a good person. And the fact that we’re on the field and it’s a high pressure situation, everybody wants to win, and I’m standing next to Coach Osborne and he’s telling the refs, “The ball should be here and there’s this much time left on the clock.” And of course, he’s right. You can go back and watch the film. He spotted the ball correctly and the time on the clock was correct. Well, all the Florida State players had run onto the field thinking the game was over, but we called a timeout so it was all legitimate. Well, a few of their players started f-bombing Coach Osborne and calling him names and stuff, and I totally forgot about the football game when I heard them saying this stuff -and I’m glad I didn’t get thrown out of the game. Lesser things have gotten guys thrown out of football games before -but just the fact that he’s like a father figure to you when you’re playing for him? So them saying something is like somebody saying those things to my mother, you know? (laughs)

ZW: And I pretty much told them what I thought about it. And then, of course, Coach is mad at me for saying that stuff back at them. (laughs) Of course, I didn’t always listen so well. 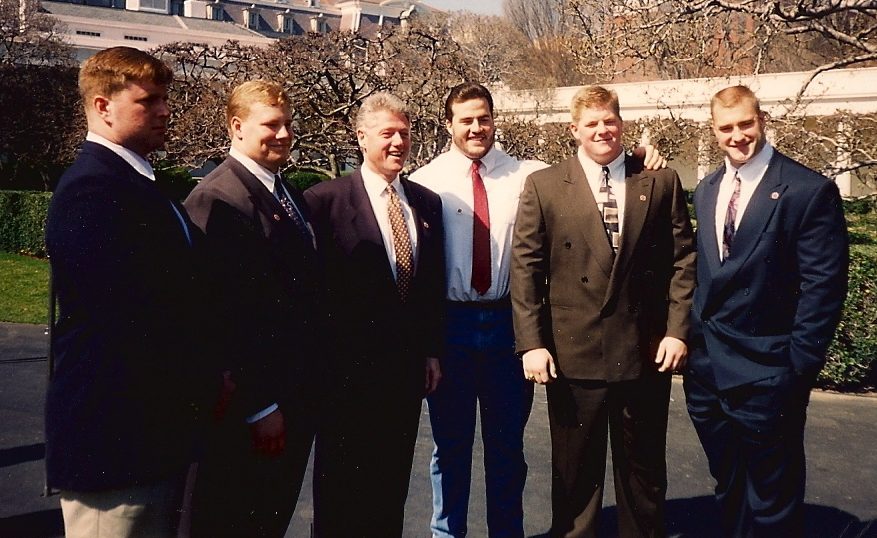 The Pipeline and President Clinton share a chuckle (Unknown/Uncredited)

Q: Well, obviously, we know your senior year was a year to remember in ‘94, but what other contribution would you say you brought to the teams those years?

ZW: Boy, contributions other than comedy relief? (laughs)  You know, I guess I really enjoyed playing there. I‘ve told people, ‘If they would’ve paid my rent and gave me as much food and beer that I wanted, I would have played there until I couldn’t play anymore.’ I really enjoyed being there playing. You know, one of the best and worst days at Nebraska is your senior year there at Nebraska…