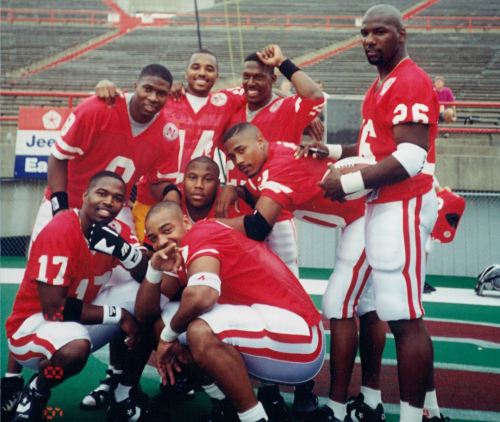 Unknown/Uncredited
Friends for Life: Troy Dumas (in front)
By Paul Koch on 5/17/2018

Excerpted from Chapter 18, No Place Like Nebraska: Anatomy of an Era, Vol. 1 by Paul Koch

People, I just want to say, you know, can we all get along?

On campus and around America, 1993 was a year of turbulence and change. January began rather calmly, ushering in a new U.S. President: Hope, Arkansas’ William Jefferson Clinton. February, on the other hand, got messy real quick. Dredging up memories of the 1992 L.A. Riots, it began with the federal trial of four Los Angeles police officers accused of beating parolee Rodney King after his infamous high-speed freeway chase. Only days later, Tim Berners-Lee (a researcher at the European High-Energy Particle Physics lab in Geneva, Switzerland) unleashed the World Wide Web upon us. Then, only days later, New York City witnessed a group of Islamic radicals try to fell its World Trade Center with garage-laden cyanide explosives.

Concurrent with these events, the Nebraska teams were putting their finishing touches on their third straight Winter Conditioning program with a renewed sense of purpose and commitment, further building to big changes on that fall’s horizon. The Huskers were being forged into men, into warriors just as the great wheels of the 60 & 3 were set in motion. Which brings us to Troy Dumas, a young warrior from the edges of Wyoming ready to knock the snot out someone, anyone. It was pretty rare for a kid in those days to forgo some type of redshirt experience, but Troy pulled it off with aplomb. In looking back on old game film from that era you’ll not find another athlete who could make a tackle and quickly spring to his feet, only to leave one opposing player after another injured and writhing on the turf in pain. Troy could ‘bring the wood,’ as former Husker outside linebacker Broderick Thomas used to say. And the neat thing was, he was such a calm, quiet and easy-going guy off the field.

“We had conversations about goals that we made that game. And we always talked about the ones we didn’t and tried to get that figured out.”

Where are they now? Colorado, Sales

Question: So let me ask you, Troy, when was your first fall camp?

Troy Dumas: ’91. I played in four years and didn’t redshirt. It was kind of unique for that time.

Q: Did you notice a profound change in attitude during that time?

TD: Yeah, that’s one of the things that got better over the years. It just came down to, “Let’s see if we can pour everything into it and see where it takes us.” Knocking on the door and seeing if someone’s home, you either have to put up or shut up at some point.

Truly, the biggest thing that stuck out to me was just going into the locker room and getting your helmet with the red N on it. You start thinking: it comes with so much tradition and so many good players that played here and it was just an absolute honor at that time. And I wasn’t the only one in awe at that moment. There were a couple of the freshmen, there was Abdul Muhammad just sitting there on the locker room bench and staring at it, and he couldn’t believe it, it was such an honor. Those were such sincere feelings. We were about to embark on something special. You could just feel it that first day.

TD: The simple fact that we’re gonna be Nebraska Cornhuskers and there is tradition here to be upheld, and we wanted to prove coming in as freshman that we could play and wanted to win a championship by the time we left here.

Q: Your class had that collectively in mind from the start?

TD: I’d like to think our class was special because we had that in mind. Not only that, but we were more close-knit off the field as well. My class and the ’92 class bonded so well, gelled so well together that it contributed to that, too. It’s not something that happens for everybody and every team.

For the most part everybody was on the same page as far as what we wanted to accomplish and how we were going to get it done. It was just like everybody found something in common with everybody. It didn’t really matter what kind of lifestyle you came from or what state you came from, but you had that common bond going in as freshmen at this prestigious powerhouse. But on top of that we just found a lot of ways to get along with each other. There wasn’t a whole lot of shit going on.

Now, obviously, I could bring up certain incidents that happened when we were freshman, you know. It was actually ‘the fight’ that broke out; I think it was the weekend right before school started, all the freshmen were down at Harper-Schramm-Smith dorms.

Q: I’ve never heard of this. Tell me more.

TD: A big fight broke out with all of us freshmen and the local thugs, so to speak, or whatever you’d call them. That night all of us freshmen came together and had each other’s back, and we didn’t know each other from Adam. That was our first bonding moment, and you can ask any freshman that came in that ’91 class, everybody could speak to that. Every freshman football player was involved in that in some way. They were either throwing blows or breaking up fights or what have you, and you can ask anybody who came in that class. They can talk to you about it. But it was a bonding moment. It took place in the parking lot outside the dorms. I was there along with Clester Johnson, Dwayne Harris, Ken Bello, Christian Peter, Abdul Muhammad was there, Jacques Allen was there.

Q: What precipitated the fight? Who started it?

TD: From what I understood, at the time it was something every new freshman class had to go through with these individuals. But after that day -the whole vibe of that freshman class that came in?- they just really stuck together and took it to those guys. Those guys had never had a butt-whooping like that, so we kind of set the stage at that moment. We didn’t take too much crap. 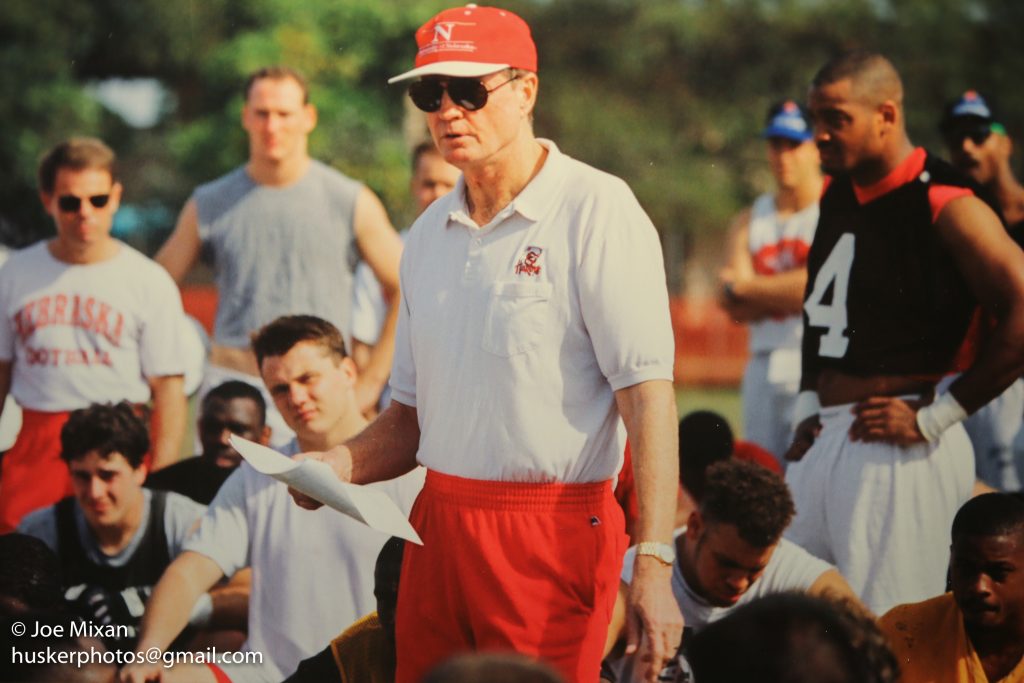 Q: Were the individuals you fought fellow students or just kids showing up on campus?

TD: Just kids. It seemed every year they would try to pick a fight. I think they called them “The Lincolnites” or something like that. And we’d only been in Lincoln like a week and a half, two weeks.

Q: Funny you say that. I recall back in about ’87 there was this one bar fight. We had a big O-lineman -the kid was a rangy 6’8”, 315 or something like that- well, another one of the guys got into a scrub-up at an O Street watering hole and this guy supposedly went running out of the bar, didn’t back his buddy up. He lost a lot of guys’ respect for his lack of unity and you can bet money it affected the team on down the line. But this story of yours sounds just the opposite…

TD: Yeah, totally opposite. We get together to this day and that incident will always come up in some shape or fashion. It was pretty significant. The coaches probably wouldn’t count that sort of thing, but we bonded and gelled from that day on. We had our closest relationships since then.

Q: Every street fight I’ve ever been in (and they haven’t been many) holds one image that sticks out. Do you have anything like that?

TD: (Laughs) Well, Dwayne Harris, he was a pretty tough, strong guy. And taking on one was enough for most guys, but he took on two at a time. Dwayne swung some pretty big fists. (laughs) I’ll leave it at that…

Q: He didn’t mind getting double-teamed, so to speak?

TD: He was a one-man wrecking crew. (laughs) But as for me, it wasn’t a culture shock moving to Lincoln at all. I showed up pretty hell-bent on showing people I could play and didn’t want to redshirt. I wasn’t really intimidated by anything or anybody. The only thing I was really tentative about was learning about the game and the scheme, but physically I was okay.

Q: So your position coach… you did a position switch, didn’t you?

TD: Yeah, I was with Coach Darlington for a few years then I switched over to linebacker because of injury. But it wasn’t something that just came out of the blue, because we were changing the defense. And that nickel position was actually a strongside linebacker position, so it wasn’t a really big switch because that defense we ran was basically a third-down defense in ’91 (and it eventually became our every-down defense). Ernie Beler was hurt, Lorenzo Brinkley was hurt. It put me up closer to the line of scrimmage and let me be more aggressive, better than being patient and playing free safety. I was physical, so I’d come up and hit people, getting sucked in sometimes, but it was a different mindset for sure.

Q: What made Coach Darlington stand out?

TD: Well, he really knew a lot. Because he’d coached so long, he stood out, pretty intense. In the way of knowing what you are doing and how you line up and make sure you can make the right adjustments and calls and everything like that. His biggest pet peeve was, “You have to know what was going on back there with the secondary.” It’s a cerebral game for him. You had to know what you were doing back there. It’s upsetting when you make a mistake back there, because that could cost you the game.

Q: So then Coach Samuel became your position coach when you moved up to linebacker/outside linebacker?

TD: Coach Samuel was more laid back, and technique-wise it was more footwork than anything. So I could make adjustments or calls pretty easily. It wasn’t a matter of learning the defense, but more technique and learning how to shed blockers and things like that. 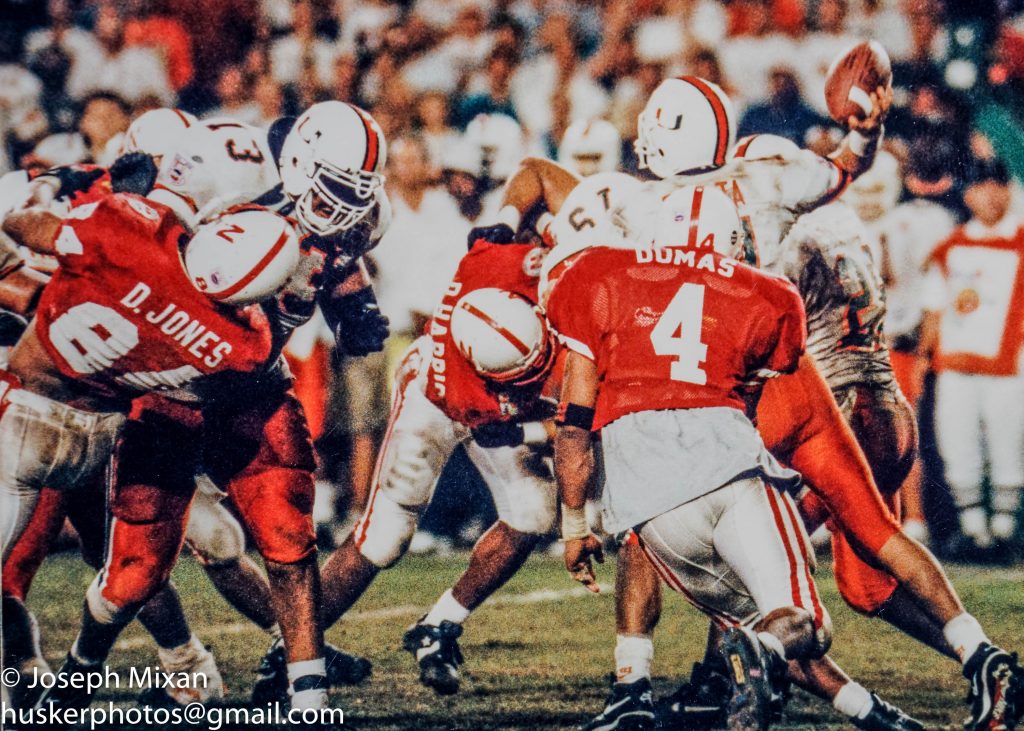 Troy Dumas #4 prepares to dismantle a Hurricane (Joe Mixan photo)
Q: What can you tell me about Coach Osborne?

TD: Spring ball my senior year, we were doing a scrimmage and I tattooed Tommie coming down the line on an option. And the next day I was walking down the hallway to the field and Coach Osborne came up to me and put his arm around me and kind of said, “Hey, take it easy on the quarterbacks.”

Q: Kind of like, “I appreciate your effort, Troy, but kind of back off on our QB’s,” eh? (laughs)

But if I were to say one person who really had some effect, it was Tommie. He had that glow, that leadership quality. With his junior year and blood clots and what not, everybody thought our national championship run was over, and we took that personally as a defense, that elevated our game there. At the time people weren’t really looking at the defense as the identity of the team, it was pretty much offense this, offense that. So when Tommie went down? It got personal. People had to realize that we were more than just an explosive offense. It was blue collar and we would do anything we had to get the job done.

Q: Not a lot of pretty boys out there?

TD: Not on the field. In the between the sidelines we strapped it on and got the job done.