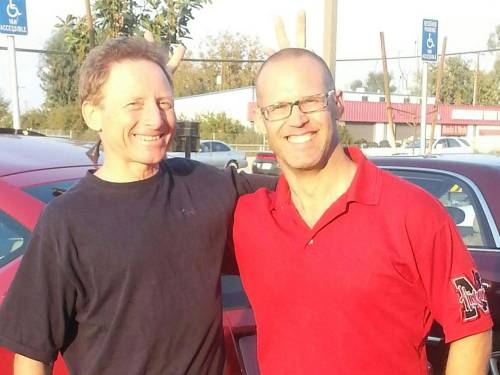 Excerpted from Chapter 27, No Place Like Nebraska: Anatomy of an Era, Vol. 1 by Paul Koch

Q: What stands out to you as far as turning the corner? I’m sure you remember the meeting a week or two after the Citrus Bowl when Boyd walked into our Strength Staff meeting, screamed out some four-letter words and pounded on the table with his fists, “No more, no more! We’re going in a different direction! This is Nebraska!” Do you remember that, and the subsequent re-evaluation process?

I remember that Citrus Bowl, and there were some really talented guys on that team, guys like Will Shields. Yeah, we had a really good time: we got to go to Universal Studios, I ate the biggest baked potato in my life, I thought it was a mutant. I had a really good time, but at the end of the day when we came back home I was very empty inside. That’s my opinion. You had worked so hard, and then at the end of the whole process what did you accomplish?

You expected to win. You expected to win, but you didn’t want to win. You expected it, but you didn’t put forth the effort at the end of the season. And Boyd had gotten tired of that, too. You know, you put that hard work in, worked harder than anybody else, and it seemed we just couldn’t get over the hump. Why? Because the emphasis was just to get there. And the players who won those national championships hadn’t felt the same way. Now this was about, “Hey, we’re not just the wood-chuckers of the Midwest here. We’re the Cornhuskers and we want to take on the whole world.” I think the players made up their minds to not just be content with getting to bowl games anymore, but in winning them. They said, ”Let’s go show everyone who the Cornhuskers really are, the whole world who we really are.”

There is a difference between wanting and needing and believing. When they started believing they were contenders to be the national champions, the players -more than anybody else- they did it. They were willing to go through the process. It wasn’t, “You need to do this, you need to do that.” They were player-coaches. Certain players at each position, they said, “The problem stops here.” If you have a certain group of players at each position who say, ”Hey, we’re all in this together. If one person messes up, we all mess up.” Certain players said, “Hey, we’re going to make a commitment to follow this to the end. And it starts in January.”

Q: Going back to the player/coach thing. Any names stick out?

BB: I’m spoiled. I was spoiled. There was a whole group. I can look at the whole team in 1994, I can look at all the offensive linemen and the defensive lineman. People go look at that ’94 and ’95 team. We had Mike Rucker (at the time Mike Rucker was behind Grant Wistrom), Michael Booker and Mike Minter. Go all across the offensive line, go three deep. See all the guys we had, that could have and did play in the NFL. They got drafted. The offensive line: Aaron Graham, Brenden Stai, Zach Wiegert, Mark Gilman, all those guys… I hate to say it, but they were like my best friends. Defensively, you had Christian, Jared Tomich, Jason, Grant Wistrom, Terry Connealy. The whole group, they took a genuine interest in getting this done. There was an energy, “If we do this, we deserve to win.” They had some energy and started to believe it, and when everybody believes the same thing, watch out.

Talk to one of my best friends, Cory Schlesinger. Rockhead. When they’d go out there and do drills they didn’t just do them haphazardly. They said, “Hey, I’m going through and everybody else behind me is going to go through it hard, or were gonna do it over again.” It wasn’t just about going through the motions. They took a genuine interest and became detail-oriented. They wanted to be crisp, not make a marathon out of it. “Let’s do the work and let’s go home.” That’s my perspective of it.

Q: So they had a very ‘Midwestern work ethic’ kind of attitude? Get the job done and go have fun?

Q: Great song! It reeks of comeuppance, of vengeance. Of correcting slights, righting wrongs, exposing things to the light.  And Bryan, you were notorious for putting in so many hours, because you pretty much seemed to live in Memorial Stadium. Of course you went home to sleep, but I remember mornings waking up at 5:30 to work out with Jack Nickolite -before any athletes showed up- and you would already be there sometimes. What was your typical schedule?

BB: Notorious, huh? (laughs) I’d get there sometimes at 5 in the morning and maybe leave 8 or 9 at night. I believed in WIT: Whatever It Takes. For me, I wanted to get in as much work as I could, because I didn’t think I could get it all in. That was who I was. And like I told you before, that was my family. Those kids were my kids. Some people won’t like that, but it is what it is. When you see somebody out there and they give you everything they’ve got (and it’s a dream when they do that), and you know when they come to Nebraska to be football player they deserve to receive the best you can give to them. I wasn’t gonna sit down in my office at the time they’re in the weight room there, I’d do that on my own time when they weren’t there, like early in the morning or late at night. A lot of people didn’t like that, but I’m one of those who feels that if you don’t spend time with the kids, somebody else will.

BB: Yeah, making hay. Some days I felt like I’d slept in the hay. (laughs)

Q: In ’93 during the offseason, a different way of coaching the players appeared, didn’t it? Where every strength coach was given a position to oversee, a specific group of players, I think…

BB: It became that each strength coach had one group -a position that you worked with- and you became their strength coach during the winter conditioning period. It made it very competitive for all of us, which was a neat thing to do. Like the rest of them, I don’t want to lose. So at the end of the day, at the end of winter conditioning at the testing, you wanted to see which group had the most improvement.

That’s what it’s all about. Everything was about competition. Look, I’m redheaded, I’m short, I’ve got freckles, I’ve been competing all my life. (author laughs) I’m glad you got a big joke out of that.

And you asked, “Why did I stay so late?” There were walk-ons and guys like the Joel Wilks’, the Cory Schlesingers’, they wanted an opportunity. Coach Osborne said they would get an opportunity, so I wanted to give them that opportunity through the weight room

Q: (laughing) “I’m sick and tired, and I’m not going to take it anymore!”-kind of thinking, huh?  So here’s Bryan Bailey, about 5’ 9”, about 150 lbs soaking wet after a dip in Branched Oak. So how did little Bryan Bailey end up with, of all people, the Pipeline, the big offensive linemen?

BB: It was mutual. Because I had done my work. I had a plan and I was going to work my plan. I worked really hard to get educated as much as anybody else around about strength & conditioning and sport specificity.  You’d worked with me. I never ran marathons (and everybody said that I must have trained to do that), but I only ran to get my head straight when other things were going on. When I went for a run it let my mind work and allowed me to clearly think about other things.

And those people -each one knew, the Pipeline- that they would make everybody else work harder. The lines on both sides, we all knew that the game was won in the trenches. The running backs and quarterbacks? All the time, I’d tell them, ‘If you want to make a lot of dollars someday, you go up to that line up there and give them credit every time you’re in front of a microphone.’ If you want a good crop, you better have a big tractor.

Q: Tell me about your relationships with some of the coaches…

BB: I’d say the one I was closest with was Tom Osborne. Each day during the time Coach Osborne had that 20-minute period when he’d come in and lift weights, we’d talk about leadership, how you get people to go in the direction of what your vision is. I watched him and how he handled himself. He always gave me the time of day if I had any questions -because I always strived and wanted to be successful- so I always looked at how he was successful, how he treated people.

You know, some people didn’t like the way he treated Lawrence Phillips and they started calling him a bad person. Tom Osborne had a vision that “each person is unique” and had something to offer. And Tom Osborne helped me to become a humble person and teach me about the process. That’s one person I’ve looked up to all the time. He simplified things and showed you what life was all about. So Tom Osborne really meant something special to me.

Q: When you talk about leadership, does any one comment or observation stand out to you?

BB: Yeah, ‘walk the talk.’ If you’re gonna talk it, then walk it. And Coach Osborne didn’t have to say that, he lived it. The best lessons I learned from Coach Osborne was when he didn’t say anything.

I’ll never forget the time he came in and worked out much later in the day, while there were two janitors cleaning up the weight room there. And he stopped his whole workout, his little squat routine, and asked both of them how they were doing, how their families were doing. Then afterwards I asked him how he was doing, and he said, “I’m doing great. But I better hurry up, because one of our guys is gonna have knee surgery and I want to go see him tonight yet.”  So there wasn’t a time that guy didn’t make time for somebody else, and I thought, ‘If he can do it, why can’t I do it?’

I was grateful to be a part of that family and to carry his message to the players. Because it’s not about getting the most out of them for four years and throwing them out, it’s about what they become later on. You come back and look at them ten years later and you ask, ‘What did they become?’ Hopefully everybody that you meet along the way in life, hopefully you’ve brought something positive that will make them better. The process.