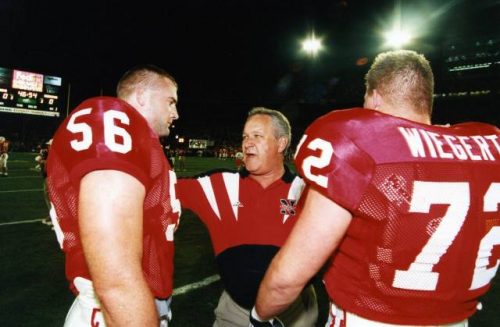 Excerpted from Chapter 45, No Place Like Nebraska: Anatomy of an Era, Vol. 1 by Paul Koch

Milt Tenopir: The (offensive line) were aggressive football players and our whole offense was built around them. It didn’t center around the receiver or center around the quarterback, necessarily (even though it’s nice to have a good quarterback, that’s fine). But we were a physical football team and that all started with the kids up front. They took challenge to that and it was important to them to let the other guys get out there in the fourth quarter, and that was what we’d do.

Q: Hit the defense on the chin hard enough and knock them on their backside, and sooner or later they’ll get tired of it and give up?

MT: We did enough of that. You’ve got to interview Warren Sapp. He got his ass kicked good by us. (chuckles)

Q: Great idea, Milt, I might just do that! (Warren Sapp did not respond to interview requests.)

And let me ask you: if you were back on the field today coaching, would you find yourself repeating the same lines over and over again?

MT: Well, I didn’t have any catchphrases or anything like that. They knew what they had to get done and we knew what we had to do to win a football game. You know, whether it’s first and ten or fourth and one, they knew they had to get their ass in gear and get going.

And we’d get into some big games, so to speak, and won three national championships, and all I’d tell them was, ‘You handled things so far, all you have to do is do it one more time. And that’s doing what you did.’ In bowl games? We dominated in those national championship games not necessarily doing battle on the scoreboard. But as far as physically dominating? That’s what we were all about. Those kids took the word ‘dominate’ to heart. They knew what the heck that meant. It wasn’t just a quote, saying we were gonna dominate them. They did it.

Q: Funny you say that word –dominate– Milt. Brenden Stai gave me a copy of that drawing of the O-linemen that had the word ‘Dominate’ on it. I believe it was a freshman that drew it up for you guys… 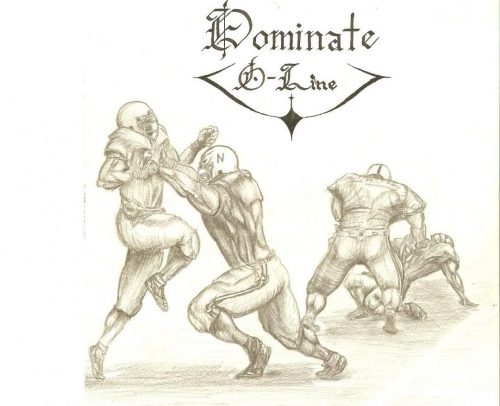 MT: Oh yeah, I’ll tell you who that was in a minute, a kid from down in the Houston area. I’ve got the original pencil drawing in my basement. This kid brought me a pencil drawing -I had it on the wall in my office- it was Mike Van Cleave!

Q: And Coach Osborne, what effect did he have on how you went about coaching and teaching?

MT: Well, he let me do it. (laughs) Tom was very good at that. He let us -I did the run schemes in the late ’70’s on and we’d tweak things that would work and what have you- and Tom gave us free wheel at that. We tried to tweak things and execute things and change up schemes weekly, depending on what defense we were looking at, but Tom just gave us free wheel of that and let us go.

We never did punish our linemen, as far as having a problem with beating them up, hopefully not in practice. Sometimes things would get physical. I worried about their health like everybody worries about a running back or a quarterback, you know? But Tom pretty well gave us free wheel about what we wanted to get done and let us do it. And that was the thing that was important about him: he let us coach. And that’s what I respect most about him. 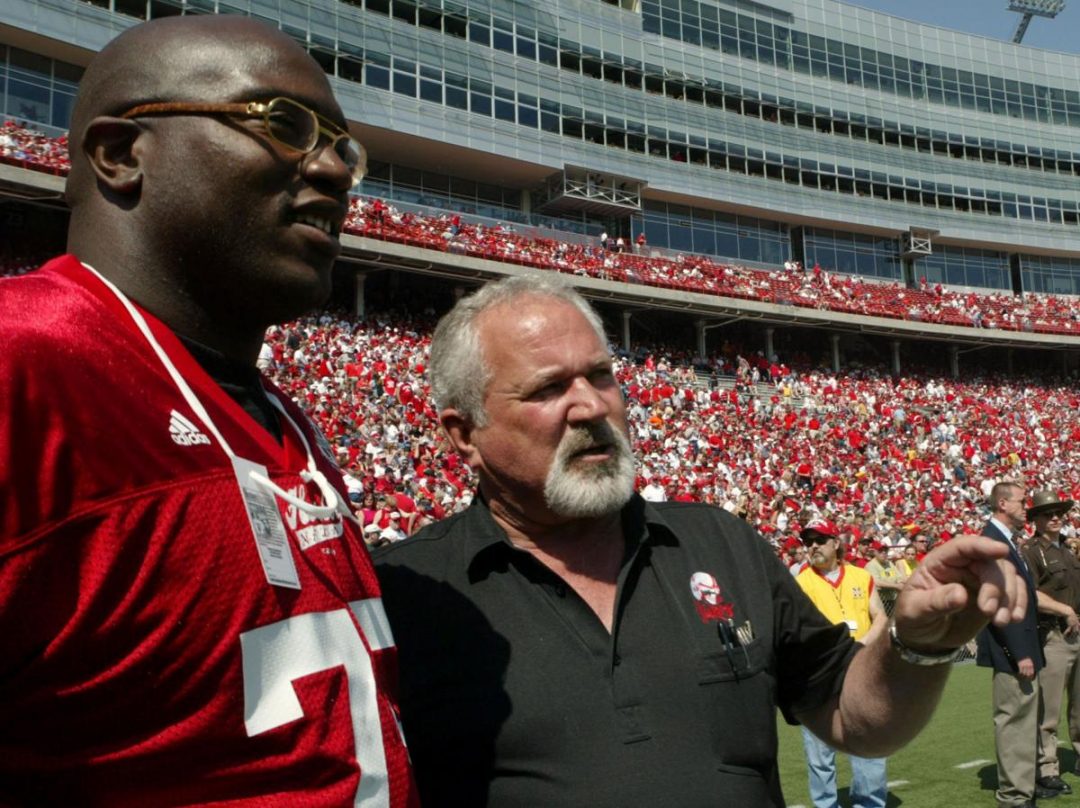 Q: What about Charlie McBride coaching the opposing side? You guys used to have some fun little go-arounds during the one-on-ones down there in The Pit, didn’t you?

Q: Do you a have a favorite game that sticks out to you?

MT: Probably the one that sticks out most was Kansas State the year we didn’t have Tommie and Brook was hurt. Matt Turman was the quarterback and we ran 22 or 23 isolations at the end and we won the game 17-6, but I felt that game was won by my guys up front; just lined up and hammered their butt. Never ran an option the whole game because of the health of our quarterbacks, even though they gave us every opportunity to run one. They challenged us to run an option with the 7- and 8-man fronts they were doing. But that game sticks out the most as the most gratifying, because I felt the offensive line left it all out on the field that day. 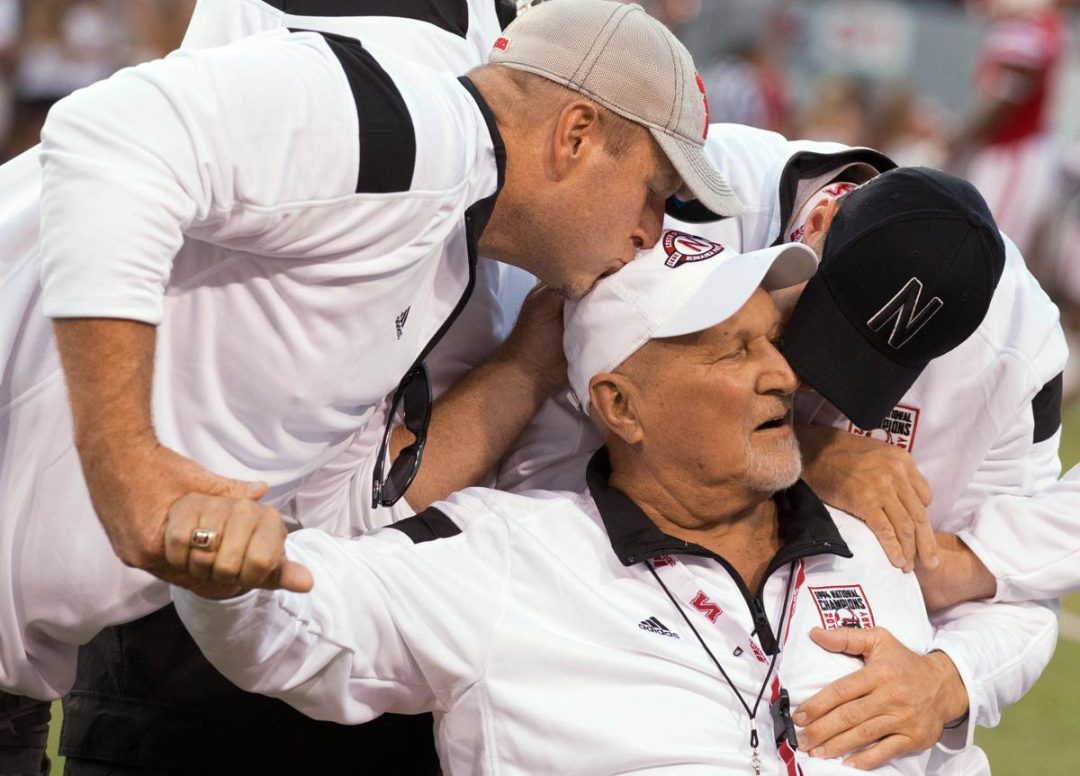 The Pipeline showing love to their mentor, Milt Tenopir (Unknown/Uncredited)

Q: The way you coached the guys and the way they played was pretty much smash-mouth. Would you say that reflected your personality, straightforward and all?

MT: I wasn’t a ‘rant and rave’ or hollering guy, but I loved the physicalness of the game and those guys knew that. They’d get more of a thrill from knocking someone on their can than most guys would catching a touchdown pass. (laughs)

Q: Thanks for your time, Coach. Any last comments that reflect on what made your offensive linemen unique in their day or the way you went about things?

MT: We did the same thing year in and year out. We just happened to have kids who could dominate every week.

You know, in the ’90’s and the early ’80’s was exceptional, but in the ’90’s we just had the athletes who could do anything that we asked of them and were probably more physical than anybody we faced. They were something. Pretty special. I still keep in touch with those guys. Just got back from fishing with a few guys, Zach and Eric Wiegert. Brenden Stai and Aaron Graham, sometimes, too. We keep in touch. We’ve built good relationships over the years. 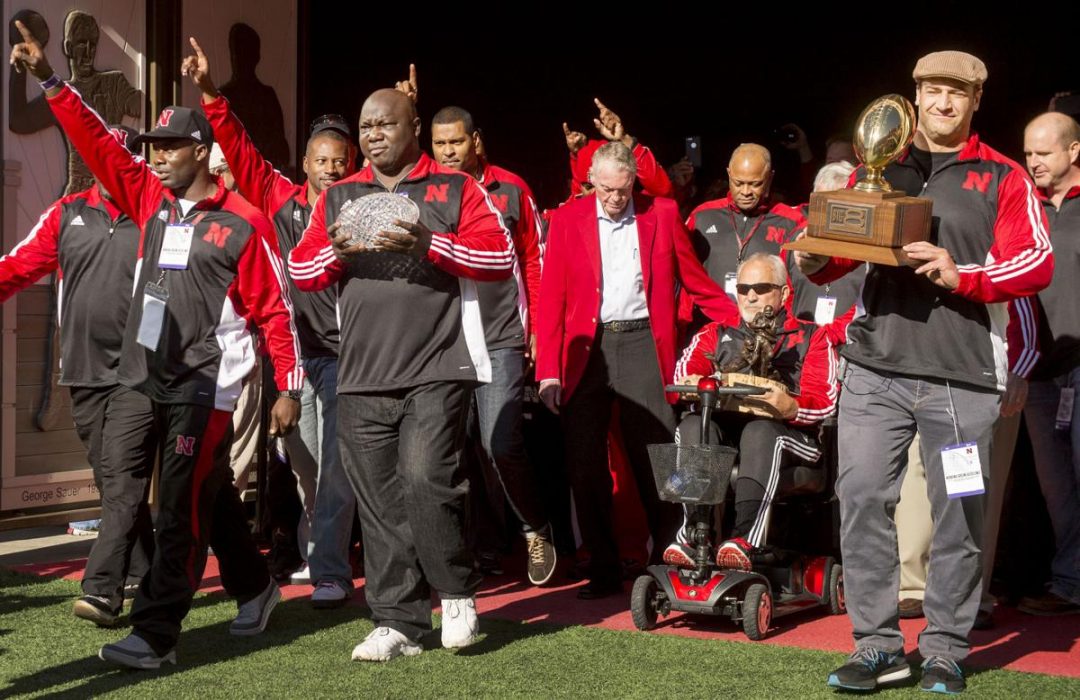 Milt –who has since passed on- had to take off for a promised appointment, but in this small block of time we heard a few basics about the Nebraska O-Line mindset. There was a great synergy among the group and their coaches (Coach Dan Young included), and he reiterated the one word that summarized the intent of their mission: Dominate.” Those kids took the word ‘dominate’ to heart. They knew what the heck that meant. It wasn’t just a quote, saying we were gonna dominate them. They did it.”

This one item in particular stood out: “(the offense) didn’t center around the receiver or … the quarterback, necessarily…we were a physical football team and that all started with the kids up front.” In retrospect, Milt’s right one hundred percent. Our thoughts typically go to the quarterbacks or the running backs of those Husker offenses, but even that array of talents proves futile without the bruisers up front doing their work. Sure, Tommie Frazier is hailed as one of the greatest college quarterbacks of all time, but recall that he played in only 5 of the twelve games en route to achieving the ’94 national championship. Quarterback Brook Berringer? Five games. Matt Turman? About two. And freshman Monte Christo brought up the rear with a few scattered minutes, too. What does this tell us? It speaks of that first, amazing injury-racked ’94 championship year’s offensive hopes pinned exclusively on the Pancake Patrol. And though they may not have won any Mr. Universe contests, they were far from doughboys. It was muscle and spit and sweat and guts… but desire above all.

Search on Amazon.com for Milt’s magnum opus, The Assembly Line, and you’d be shocked to find the least expensive used edition available has an implausible asking price in the $69 range. Why? Because it’s pure gold, baby. Any offense intent on excelling at the inside zone, outside zone, counter and trap plays of Nebraska Football dominance of the day knows this as its bible, and that’s Gospel truth.

The gospel account of Mark 12:31 states, “The second (great commandment) is this, Thou shalt love thy neighbor as thyself. There is none other commandment greater than these.” In this particular case, brotherly love meant opening up opportunities for their fellow linemen deeper down on the depth chart to get some playing time, too: “..it was important to them to let the other guys get out there in the fourth quarter, and that was what we’d do.” Hallelujah, that’s brotherly love exemplified!

Milt Tenopir on breaking spirits: “We dominated in those national championship games not necessarily doing battle on the scoreboard. But as far as physically dominating? That’s what we were all about. Those kids took the word ‘dominate’ to heart.”