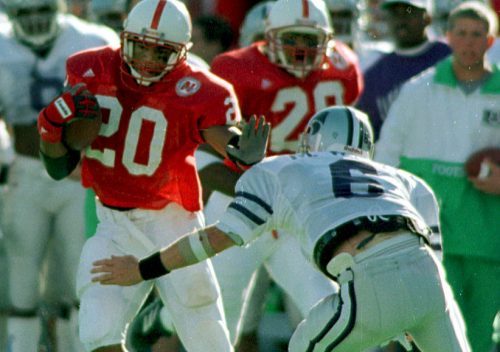 Excerpted from Chapter 65, No Place Like Nebraska: Anatomy of an Era, Vol. 2 by Paul Koch

Q: And Coach Osborne, what stands out about him?

Michael Booker: Well, one thing about me and Lawrence Phillips, we got into a lot of confrontations. Me and Lawrence got into it about three or four times. A lot of people don’t know that. You would think two guys from California would get along, but we really didn’t get along at all. Lawrence was like the bully of the team, and there’s guys he bullied and I wasn’t going to let him bully me.

And that brings me back to T.O. One time me and Lawrence got into it, and we had to talk to T.O. and sit in T.O.’s office. And I ain’t never felt so bad in my life. (laughs) Not because I got into a fight, but how he talked to me. He was disappointed. He was like, “Michael, I’m disappointed. You and Lawrence are going to have to find a way to work this out.” I’m like, “Aww, T.O., you’ll never see me back here again.”

Q: Did you guys find a way to work it out then?

MB: Me and Lawrence? No. No, we was cool. I ran into Lawrence when I played in Atlanta and we sat there and had a couple drinks, but that was it.

Q: How did he bully people around?

MB: Lawrence had an attitude. Everybody knows. Everybody who played with Lawrence knew what kind of a bully he was.

Q: On the field or off the field?

MB: On the field and off the field. There’s no reason, he’s not in jail ‘just because’.

Q: So you guys never got along. That’s pretty interesting.

MB: Yeah, me and Lawrence never got along. 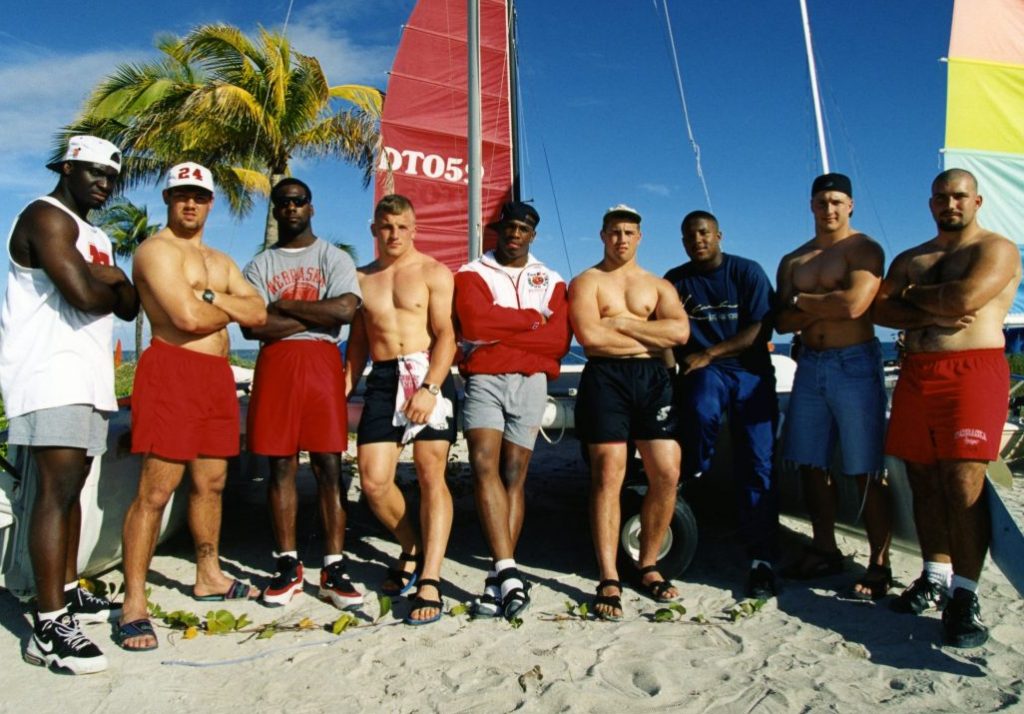 Q: I always thought he was a pretty quiet guy…

MB: There’s nothing about him that was quiet. He was quiet, but like a volcano. So when he’d erupt, he’d erupt.

Q: What would make him erupt?

Q: So let me ask you, you played awhile in the pros, too. Inevitably you talked to a bunch of guys and about their college experiences. How would you relate your experiences to those who played in other programs?

MB: Well, I had a couple friends from some of the Florida schools and we used to talk all the time about how we would beat on them or how they’d beat on us, and pretty much how our fans in Nebraska are the greatest. And one thing I’ll always remember about Nebraska football is the fans, win or lose (and we didn’t lose much). And then talking about other schools, I played with a guy named Henry Crockett who played at Florida State, we’d joke about it. I used to say that “They’ve got to cheat us to beat us.”

Q: Do you remember the first game you played in?

MB: That’s funny, but no. I don’t remember the first game or the last game I played in.

Q: Your last one was the win over Virginia Tech in the Orange Bowl game, right?

MB: Yeah, I remember it briefly. I remember winning it, but most of the games I remember was either when I got an interception or something like that.

Q: You were more likely ‘in the moment’?

Q: Sure. And you couldn’t turn your head because Coach Darlington wouldn’t let you?

MB: I do remember one game, that KU game! We were playing at KU and I think it was one of my first games starting. Hold on, it’s coming back… I forget what year it was, ’95 and it was there. I got beat on a couple of plays -a slant and a hook route- and I remember Coach Darlington took me out of the game and put Mike Fullman in, and he talked to me at halftime. He said, “Look, you can’t keep playing like that or you’re going to sit on the bench.” And I go, ‘Oh no, I’ve done lost my starting job after one game!’ (laughs)

So what happened? He put me back in the game after halftime and after that it was the NFL after that. I remember that game. He was like, “We have to pull you out. We have to put somebody else in there.” I think that was the first game I started. I was like, ‘Oh man, I’ve got my family watching!’ I got beat on a couple plays. It was like two plays and I was, ‘C’mon coach, I’m a cornerback. You can’t win every one of them!’ When I got back out there I started winning. It was an away game. As a matter of fact, I’m almost certain it was an away game.

Q: Any favorite practice remembrances stand out to you?

MB: It’s probably going to be funny coming from a cornerback, but it was the goal line situations. When it was goal line time, it was like the most excited the team would ever get. On a Thursday we’d just have goal line defense time. It was number one offense versus number one defense and we knew it was the best we were gonna have to play all week.

As a matter of fact, that used to be the highlight of my week. That’s when we’d really see the real competition, was the goal line. When we had goal line defense and offense. Coach would come out and it was like, “All right, you’ve got four plays,” and it was like two beasts going after each other. And there were times I didn’t want to be in there. I didn’t want Cory Schlesinger or Joel Makovicka pulling out on me. I didn’t want to see Lawrence or Clinton Childs. I only wanted to see them on tape. Not live in person. I mean, Clinton Childs, Damon Benning, Lawrence Phillips, Joel Makovicka? Come on, man! (laughing) And Jay Sims, too. We had, honestly, six running backs who could probably start on somebody else’s teams. The only problem with his game was he had four running backs in front of him.

Q: Could you imagine what it was like playing a whole game against those guys?

MB: No, I couldn’t imagine. I remember one year when I was with Atlanta playing a game against Detroit, they had a fullback named Cory Schlesinger. I think they handed him the ball and he ran out my way, and I was like, ‘You know, Cory, I’m gonna tear your knees up.’ After we hit each other -or rather, after he hit me- he said, “You know I’m coming for you.” (laughs) He didn’t even have to run me over. He was a man among boys, man! 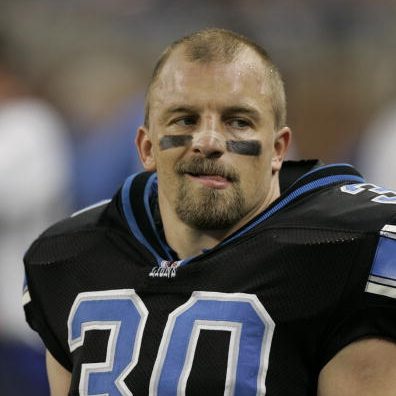 Michael Booker: I remember it was me, Vershan Jackson, Lance Brown and Jamel Williams, we were all roommates. We used to throw house parties and charge at the door, we used to make $400, $500 a party. We used to throw parties all the time. We got into a nice new duplex my sophomore year. It was new when we got in there and it was tore up when we left. We had about 15 parties. We tried to have a party every weekend until we got kicked out.

Q: What separated Nebraska from everybody else in the country at that time?

MB: Number one, the recruiting. That stood out because they took from California, they took from Nebraska, they took from Texas, they took from Florida. They took us from all these places and put us together and we found a way to win. There was really no animosity, from my perspective. I usually kept to myself for the most part, but everybody really cared about one another and wanted to win. I think the desire to win brought us together.

I would say the guys did hang out a lot together, but I didn’t hang out as much. I usually wanted to be in charge of my own actions. If somebody wanted to act stupid I didn’t want to be in the newspaper with them. For the most part I tried to stay out of trouble. We all got into a little bit of trouble in college.

Q: What was the biggest thing you got in trouble for?

MB: The biggest thing I got in trouble for? It was Dennis Leblanc. I didn’t go to class as much as I should have, and there’s something I wish I would have done differently. Except for the times me and Lawrence go into it, it was the times class was over and I was still asleep. The funny thing about my freshman year was my best year, because I wanted to play so bad. That mandatory study hall? They should make that mandatory until you’re at least halfway through your sophomore year.

Q: And your little brother played there, too?

MB: Yeah, I was a big influence for him coming to Nebraska. I think he had a good experience just like I did. When he got there I was pretty much able to tell him the do’s and the don’ts, not blindly navigate like I did.

Q: Let’s say I’m a fly on the wall and you’re giving brotherly advice. What did you tell your little brother?

MB: ‘Don’t get in trouble.’ Pretty much it was, ‘There are going be a lot of people here who don’t look like us, but it’s not a racist place.’ You have your bad apples, but Nebraska is not a racist place, there was never racial fallout with anybody at Nebraska. ‘You’re in college, so enjoy yourself and have fun, but if you don’t come here ready to play, they won’t play you.’ And a lot of it was girl advice, ‘You’ll have more than your choice of women. Don’t let the white people here in Nebraska fool you, they’re great people.’

Q: So heck, you went and got drafted by Atlanta, right?

Q: In what regard?

MB: Well, you got to remember, Nebraska is probably the most wholesome place in the world. And Atlanta, Georgia is not that wholesome. Atlanta, Georgia has a huge black population and Nebraska has a big white population, so when I moved it was like you weren’t used to the music, the nightlife, the new trouble you could get into. And now you’ve got money! But I was good, I never got into any trouble for the most part. I was able to govern myself pretty well. 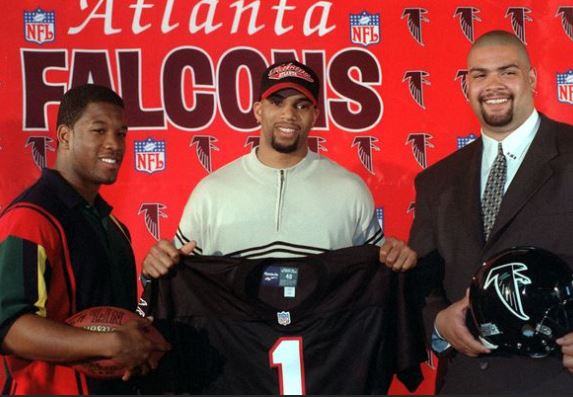 Q: What about motivation? What motivated you?

Q: Was that kind of hard to deal with, getting away from that team concept? Did that disappoint you?

MB: Yeah, the NFL really did it for me. I was never, even today, I am not big on football. I was always just a good athlete as opposed to being a great football player. I was a good athlete. I’ll watch Nebraska play to this day, but you’ll have to hold a gun to my head to get me to watch a pro game.

And watching that Suh play? We would have used him when we played. I don’t know if he would have started, but he would have fit right in. And that’s another thing about Nebraska when we played: we’d shake your hand before the game and all, but when it came time to play we’d poke you in the eye.