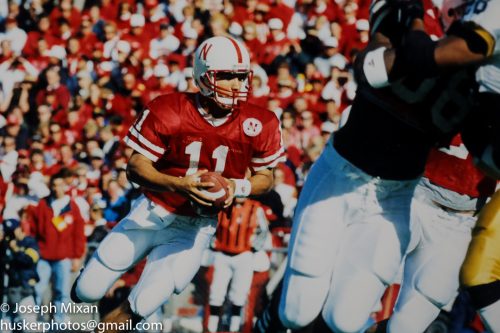 Excerpted from Chapter 2, No Place Like Nebraska: Anatomy of an Era, Vol. 1

Q: Where were you for the ‘94 Orange Bowl versus Florida State? In the stands or on the sideline?

MT: I was standing on the sideline. My redshirt freshman year. My redshirt year we played Florida State, too, but they beat us bad. And then the Orange Bowl, we should have beat them when Charlie Ward was playing QB for them.

Q: We did beat them, Matt. They only had a higher score when time ran out. We outplayed them…

MT: I agree. You’re right. That, and I can honestly say, the first year we played in the Big 12 championship and lost to Texas. I wasn’t sick that week.

And you know what, when you asked earlier if I could change things? It would have been a chance to play more my senior year. I still played a lot, but I never started again. Scott Frost came in and he did a good job, he won the national title the next year. But that Texas game Mike Minter was sick, Terrell Farley, Jason Peter…it was just kind of a bug hit and we had five or six who were all 1st teamers.

Q: Did that contribute greatly to the loss, or is that looking for excuses?

MT: That’s one thing I took from my dad and my coaches is that ‘you don’t make excuses.’ And my kids know that. I don’t like excuses. They’ll say, “Well, they’re doing this out there to me, Coach,” and I say, ‘Hey, you either do or you don’t get the job done.’ That’s all there is to it. They’re 5 minutes late to a meeting and I say, ‘Where were you?’ and they‘ll say, “Coach, I’d tell you, but it would be an excuse.” (laughs) ‘Alright, well you’ll just get some running.’ They just know there are no excuses.

Q: Any other character-building or revealing bits you’ve picked up over the years?

MT: Well, there was the Unity Council. I was a part of that. Players could meet with the coaches if they had concerns, and sometimes guys would be intimidated to go see Coach Osborne. But here were two defensive backs, two defensive lineman, two o-lineman, two receivers, two quarterbacks/offensive backs. They were kind of the liaison.

And sometimes if the coaches had something they were thinking of trying, they ran it by us first to see what our response would be. Sometimes we’d do it before the bowl game and they’d ask if we should do anything differently for the bowl game. We’d say, “We go to practice at 7, but you’d wake us up at 6 a.m. to bus over there and there isn’t anything to eat for breakfast, so were all up early for nothing.” So they’d have fruit out before we’d leave and stuff like that. Again, it brought morale up… we were being heard.

And sometimes some of the freshmen or redshirts, it was easier for them to come to a player and say if something was bugging them. Sometimes it was just dumb and we’d tell them to shut up. ”I don’t think we should have to lift before practice”, and I’m like, ‘Well, that’s not going to change.’ But it was good, it was neat.

And it wasn’t always just things that needed changed, but also if there were morale issues or “What should we do to make sure guys aren’t drinking too much alcohol during the season?” There were all kinds of stuff like that to deal with. The coaches would come up and say, “Hey, what should we do to try and curb the guys drinking during the week?” or “How do we stop the underage kids from drinking?” or “Should we bring in a speaker to talk to us about it or give us ideas?”, or ask some of the leaders of the team to talk about the dangers of getting caught up in, you know, whatever. It was a good medium to talk about some things you just normally don’t talk about during a team meeting.

Q: I’ve got to ask you about your senior year and the Arizona State loss down in Tempe. What’s going through your mind? Can you relate any thought or experience from that game?

MT: Well, that was a hard game for me. Not long before that, maybe the second game, Scott Frost and me were battling for the starting job -and he started both games previous- but I was getting reps. And we went down there and things weren’t going well -I was told that I was gonna be inserted in the first possession of the second quarter- and they end up punting the ball and it’s downed at our 1 yard line.

They come to me, “Where the ball is at, we don’t want to risk the new quarterback and center exchange going bad”, so I never got in. And the opportunities never really came for me that game. I think we set an NCAA record for safeties that game. It was just a weird game. And part of it was we were maybe a little too overconfident. I think we just thought we could waltz in there. We’d won how many games in a row -we’d won like 26, 27 games in a row- and just never thought ever about us not winning a game. 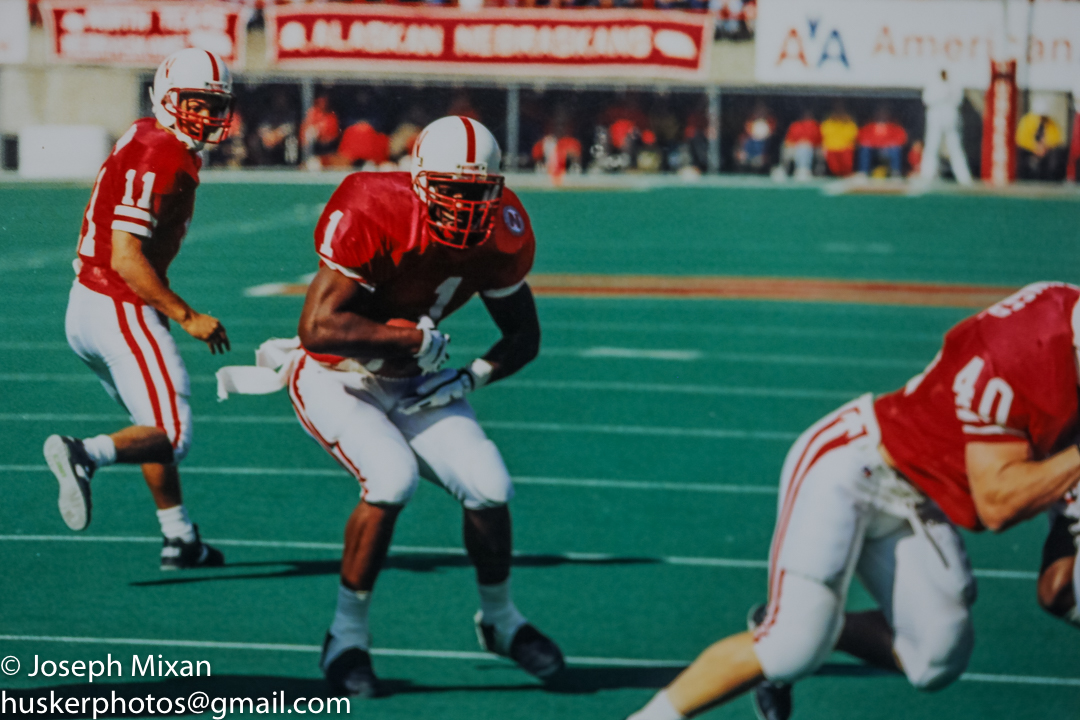 Q: Anything else you keyed in on that was inspirational for you?

MT: The one thing I liked was that saying in ’93, the ‘We Refuse To Lose.’ That was my favorite.

Say, do you remember the prayer we used to say before the game? That was always something that the team was pretty inspired by, too. Here’s another funny story about that: I can’t even remember who we picked to do it, but we always picked a guy to say it in the lockerroom beforehand. We picked a guy who wasn’t going to get to play much that year, but he worked really hard. I can’t remember his name, but he had to say it.

And if you remember, they’d say, “Dear Lord, in the battles we go through in life…”, well, he gets about halfway through and he forgets the words. And then he’s like, “Uuuugh, uuumm..” and then we’re like, “It’s okay, it’s okay…” and a guy next to him says, “Let’s just start over.” So he starts over again and he gets to the same spot, again, and forgets the words…

And don’t forget, this is a prayer, right? And he just swears. He yells out, “Shit!” And now everybody’s laughing, it was hilarious! So then he has to go through it again and gets stuck again (laughs)..and then one of the other guys just takes over for him. I’ll never forget it. We were all laughing so hard. It was the first game of our senior year. I don’t even remember who we were playing, but it was a good way to take the edge off the first game nervousness for some guys, I’m sure.

Q: Well, Matt, I appreciate your time and it really means a lot…

MT: Oh, and I have to say the weight room was very important to us. I spent a lot of time in there. I liked to lift. The progress I made was light years! (Strength Coach Bryan) Bailey would push me harder than anyone. And the other thing he was way good at for me -I hurt my shoulder once- he was great at the rehab stuff. He kind of, again, took a liking to me, took a personal interest in me. Maybe it was that underdog role. I think he kind of did, too.

Bryan Bailey worked a lot with my wife, too. She had a back injury from gymnastics. My wife and I both are really big Bryan Bailey fans. Tell him I said ‘hello.’ He’s worked with a lot of big-leaguers, he might not remember me. (laughs)

And if you’ve got to know, my favorite part of the weight room was the fact that that was where I met my wife. Kim DeHahn, she was an All-American gymnast. You know, those gymnasts didn’t lift much, but she was in there doing rehab for her back, and that’s when I met her and started talking to her. It was really corny, too. The Olympics were happening and gymnastics was on the TV in the weight room, and I went up and asked her some stupid question about some cheesy gymnastic thing to start a conversation. She makes fun of me for it to this day. I say, ‘Well, it worked!’ (laughs)

This interview’s first golden nugget of information was Matt’s mention of the coaching staff’s unique ability to give practice repetitions to twice as many players than most. Through an ingenious method of simultaneously compressing the equivalent of four scrimmages onto one football field, vast gains were achieved. The least of which meant less watching and more doing by the younger members who were not only able to cut their Division 1 football teeth via the daily beatings from the top two teams on the depth chart, but who also were able to, as Matt stated, “(get) the reps…You feel involved! And it keeps morale up.” As a result, the youngsters were quite constantly reminded of how far short they fell in the pecking order, forcing them to either improve their games or leave the squad. The resultant morale made for greater competition, which I believe can only help a group of young men on their way to proficiency in most any skill or regard. It also drove them to relentlessly make up for physical deficiencies through use of the strength and conditioning program, which we’ll get to shortly.

The second item that caught my ear was his mention of Coach Osborne and how his manner of communication, “made you try harder, it made you give everything you could because he cared so much about you that you wanted to return to him the trust and caring he put into you. You cared about doing things the way he wanted and needed it to be and took care of him.” (emphasis mine) How often do you hear a college football player speak so protectively of his coach? “Took care of him”?! ‘Did Matt really just say that?!,’ I thought to myself. That’s almost unheard of! For a guy from a top-ranked college football program to mention a fondness beyond measure for one of football’s legends makes me wish I had touched on the subject more. Perhaps I was so taken aback by comment that it didn’t occur to me at the time. In any regard, I have a feeling I‘ll be hearing of many others’ regard for the figurehead of Nebraska Football during those 60 & 3 years: Tom Osborne. 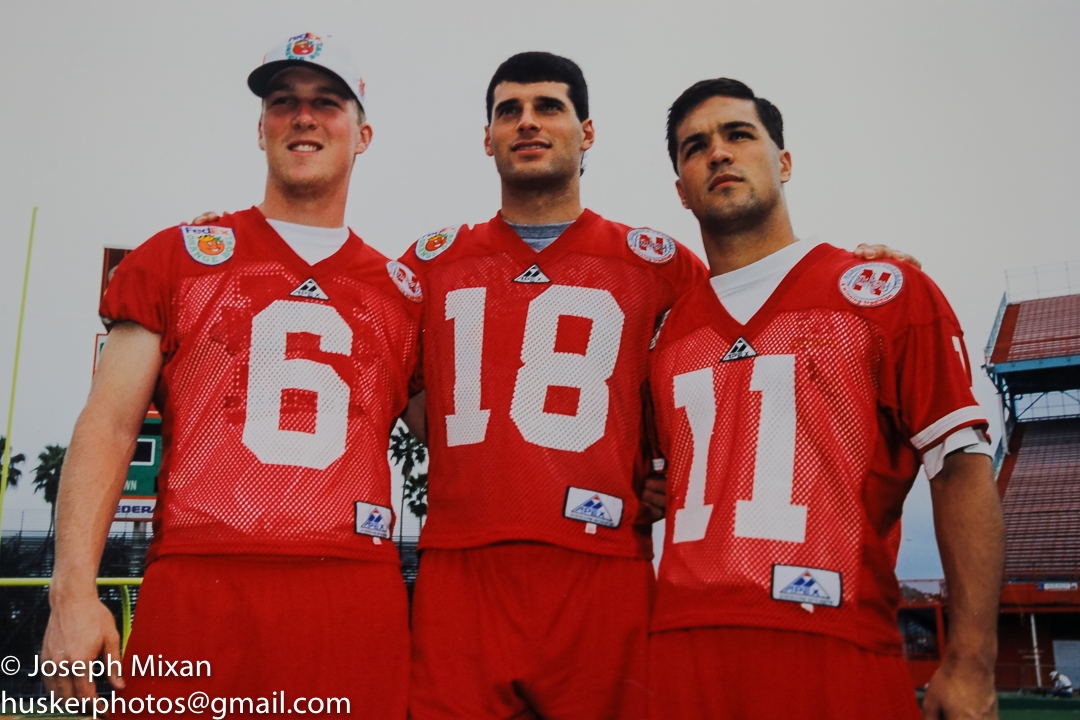 Last of all, I was touched after posing the question ‘What would you do over?’ I was expecting to hear something about keeping the ball on an option to score a touchdown instead of pitching it or something like that, but after some genuine thought on his part Matt summed it up as more than a game when he said of deceased quarterback Brook Berringer, “I guess if there were anything I would do over, it would be to tell him not to get on that airplane.” Brook was a great kid, and his passing was a great loss. My eyes get a little wet just thinking about him. I miss that kid.

Matt Turman on Head Coach/Offensive Coordinator/Quarterbacks Coach Tom Osborne, “He’s such a genuine person. His answers are genuine, he doesn’t beat around the bush, right? There’s no gray, it’s just black & white. You can tell by the way he does things that he cares about you.”