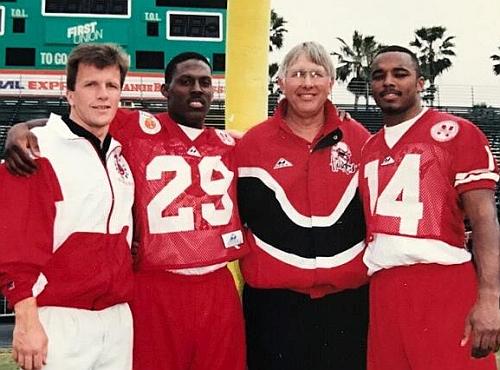 Excerpted from Chapter 25, No Place Like Nebraska: Anatomy of an Era, Vol. 1 by Paul Koch

“You may my glories and my state depose, But not my griefs; still am I king of those.”

English Theologian John of Salisbury wrote in 1159’s Metalogicon, “We are like dwarfs sitting on the shoulders of giants. We see more, and things that are more distant, than they did, not because our sight is superior or because we are taller than they, but because they raise us up, and by their great stature add to ours.” A lasting memory I’ll always have of Spartanburg, South Carolina native Kareem Moss is of him raising up Tom Osborne on a shoulder (aided by Gregory, South Dakota teammate Jon Vedral) for a National Championship victory ride after the ’95 Orange Bowl. Helmet and pads discarded, Kareem brandishes a million-dollar smile along with a sweat-soaked gray t-shirt and a wrist bound with athletic tape.

The jubilation began with his last-second interception of Miami quarterback Frank Costa that all but ended the contest, and it’s a fitting paradox that the man whose shoulders bore a 22-year national championship void was finally elevated to his rightful air. Let’s hear from Kareem Moss, a high-stepper who, like Trev Alberts earlier, had also experienced enough of the same old same old, it seems.

“We used to walk around singing a little tune, ”We’re tired of being stepped on,” like a song, a little chant. And that kind of brought us together even more, along with “Unity, Belief, Respect,” “Unfinished Business” and so forth.”

Where are they now? Spartanburg, South Carolina, Business Executive

Question: So Kareem, when year was your first fall camp at Nebraska?

Kareem Moss: ’92. And I was previously at Garden City, Kansas. I had a choice to go to junior college 30 minutes from home or 14-15 hours from home, and I’d been around there all my life and I wanted to get out and see what the world has to offer, see what God had in store for me. So I went out to Kansas on a wing and a prayer, and that’s how I ended up there, to see what the world had to offer. At that time I had to go through junior college because of academic reasons.

Q: Were the Huskers on the radar from the start?

KM: Not at all. I went to junior college to go back to Clemson. But unfortunately Danny Ford left Clemson when it was time for me to come out of junior college. (He went to Arkansas.) I was going to go there, but it wasn’t really official. So I’m in Garden City and I redshirt my first year, so I had 5 years to play 4. And the next year I came back and I ended up starting. I would have made All-Conference but I ended up breaking my leg. I played 5 games: the first four and then the bowl game. I played in the bowl game with a cast on my leg, playing at outside linebacker. (laughs)

KM: I played in the game. I wanted to get on the field, Paul!  It was tough after waiting a year and being so far away from home. I’d started to question whether or not football was my calling. But like I said, I played those 5 games and I still ended up getting recruited by all the Big 8 schools. The Big 8 at the time: OU, Kansas, Kansas State, I was real enthused by Kansas State, how they treated me on my visit. I also looked at Georgia while I was back home on my break, and set up Arkansas. But between Arkansas and Kansas State there was this school called Nebraska that talked to me. Coach Ron Brown first contacted me, then Coach Osborne and Coach Samuel and Coach Darlington, they flew down in a private plane to Garden City to visit me, and I sat in the airport and talked to them and set up a visit.

And once I visited Nebraska and found out the tradition – not only for sports and winning, but academics and the graduation rate- I was on board after that. There was something about Nebraska I couldn’t deny.

I had a wonderful time on my visit there. Derek Brown was my host. I met all the guys and we had a good time. We also went to a couple recruiting parties. I was sold on Nebraska once I visited, with Derek showing me around, the ins and outs of Nebraska. Also, Tyrone Legette, and Doug Waddell.  Yep, Twink. I sat down and talked with them on my visit, and they just made me feel more comfortable. I ended up not even taking my visit to Arkansas because that next week I went and committed and signed the papers to Nebraska.

And in junior college not only did I redshirt and go through all that, but I lost my stepfather, too, so that really disrupted my family. So to overcome all of that and still have the options that I did, it made me realize that there really was something about football that I could partake in and get something out of. 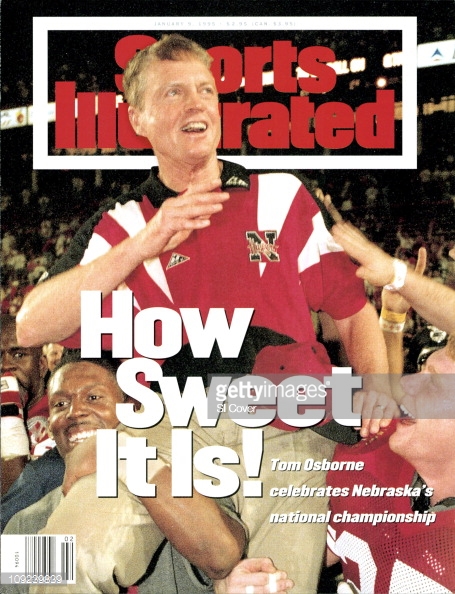 Q: You had a lot of adversity before you even set foot on campus?

KM: Before I even came to Nebraska. Yes, not to mention a few odds and ends once I got there: the adjustment to not being a star player, a face in the crowd, and then working my way up to a starting position.

Q: What was the biggest adjustment?

KM: Becoming a leader at such a prestigious school; it wasn’t that I couldn’t handle it, but there were times I couldn’t do some things that I needed to do. But before I graduated I was called on to help lead Nebraska to success.

Q: As far as leadership, what was the biggest contribution you made?

KM: Working in the outreach program, being a role model with the young kids. But also having the vision to being able to take care of my family at some point in time, all the things that we’d gone through before I even got there. I was really the man of the house. There were all the kids at home with the family: I had one sister and two stepbrothers at the time, and all this was going on when I was 18-19 years old. I had to grow up faster than I probably wanted to, but by the grace of God I don’t think I fared too bad.  I didn’t do a lot of things I really wanted to do, but I didn’t fare too badly.

Q: You have some specific goals you wanted to achieve?

KM: Oh yeah, I couldn’t wait for the day I’d be able to sign that pro contract, looking forward to the day I had something to give, do what I’m doing now, help build schools and go back in the communities that are less fortunate than some. Build them up to give them the resources both academically and athletically, as well.

Q: Do you recall your first few days on campus? Anything stand out?

KM: Just the support from the community. And the coaches, as well. There’s a certain respect you attain when you put on that Husker red. I hadn’t even played yet, and people knew who I was. I was forewarned that I’d get that type of respect. At some point in time how could you not succeed without that kind of support, you know?  Sooner or later, you have to succeed with that much support.

And it was somewhat similar to home, because we didn’t have a pro team in South Carolina. We took to Clemson and South Carolina at the time. But the Cornhuskers, you know, Memorial Stadium being the 3rd largest city in Nebraska, that really sticks out a lot.

And Coach Osborne, I can’t say enough about him. Over the years, he’s a remarkable guy. When us guys talk now, we talk about how special Coach Osborne was when we came through Nebraska.

Q: Who do you keep in touch with the most from those days?

KM: I talk to John Reece and Lorenzo Brinkley, Toby Wright every now and again. I just recently started speaking with Twink again. I still have a lot of people I want to go through and reach out to them again.

Q: Tell Twink I said hello, will you?  He spent a lot of time on the Schwinn Airdynes. He should be riding the Tour de France by now, with all the hours he logged on those things!

Q: Who were your best friends?

KM: Donta Jones and Ed Stewart and Doug Waddell. I was roommates with Donta and Twink, when I first got there they kind of took me in and showed me around. Then I hung around with Lo Brinkley a lot, and then I ended up being roommates with Ed Stewart.

Q: So your position coach from the start was Coach Darlington?

KM: Coach Darlington, we didn’t hit it off too well when I first got there. Just our communication and me understanding the game a little better than he thought I should have. We bumped heads. For a short amount of time there I was way immature and it started to get a little personal. Once I started to grow up a little bit and mature and I started to play more, we became more successful once we became a unit.

Q: Did he require something special of you guys?

KM: I just think of all the coaches I had previous to that, they always allowed me to play my game. At Nebraska with Coach Darlington there were some other things that we had to get through so we could understand each other, at first it was communication. Me, personally, it was the communication process. I was a little bit more of a young man than he thought I was, it was hard for me to understand where he was coming from. But like I said, once I matured and got my priorities in the right place I understood where he was coming from.

Q: Sort of bringing you up to speed?

Q: It’s never as easy as it looks on Saturday, is it?

KM: No, it’s not. No, it’s not. (laughs) You don’t just go out there and throw the football and catch it. We did accomplish a lot when I was there, though, and that felt good because I never liked for things not to be achieved on ‘my watch,’ you know? As a team or as an individual.