Anatomy of an Era: Final Chapter/PREPARATION 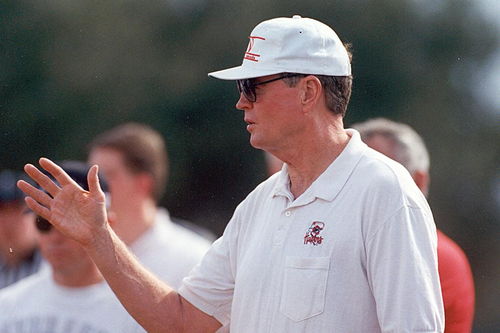 Anatomy of an Era: Final Chapter/PREPARATION

Knowing what we know about the practice session efficiency, even more telling was the way in which the staff prepared not only the team, but also themselves in advance of a contest. From the physical to what we will now see revealed in the psychological/mental realm, to observe and absorb it all was a lesson in exceptionalism…

A lot of times we’d be training to put them in situations with only so much time on the clock and run them on the field, do different things mentally… Aaron Graham- he did a great job of managing situations. I remember him with Chris Brown, making up different scenarios, giving him situations like, ”We’re playing Oklahoma and have only so many seconds left,” or “We’re playing for the national championship and have only so many seconds left.” Just creating different situations and scenarios all the time for them in taking the center, kicker and holder onto the field and working on those situations the best they could. – Dan Young

…the breakdown of film for the opponent’s defense, edit all that information and edit all the film, help with the game planning as far as giving them a lot of reports, getting the video and doing the editing for certain types of situations that your opponents run, you know, tendencies and all of that… the week before you were always working on the opponent you were playing, sometimes two weeks ahead. – Bryan Carpenter 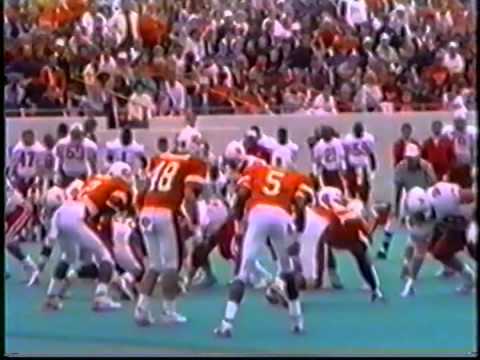 There was a healthy self-esteem born of drill, reminder, and belief in their leaders…

I don’t think for one minute that we felt intimidated or scared by what they were doing or their size and their jawing. We were prepared for it and in every part of the game, mentally and physically, we were ready to play. And we left it out on the field.                  – Gerald Armstrong

When the backups came in there -it didn’t matter whether they were the third, fourth, fifth string- the expectations were exactly the same. He prepared us for all the scenarios. We were prepared for everything we were going to be faced with during those championship runs. Whether it was off-the-field issues, whether it was injury or what it was, whatever, we were prepared mentally and physically to be able to handle it.             – Aaron Graham

One thing about Nebraska, they were never gonna put you on the field if you weren’t ready, because they didn’t want to embarrass yourself, the program or your family.         -John Reece 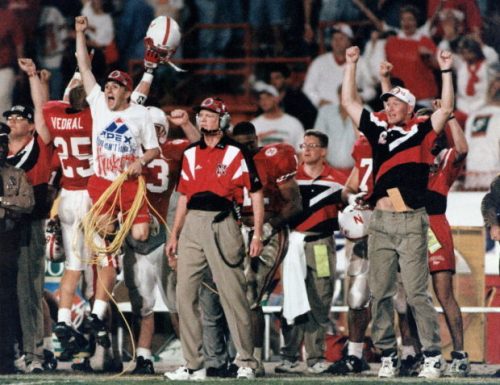 He’d lay it on the line before our first game. He was like, “You guys should have no apprehension. You shouldn’t be tired. You’re going to go out there and feel tired and weak at first, but that’s all psychological. You’re not weak, you guys are in perfect condition. Three weeks ago we scrimmaged the best offense against the best defense. Just go out there and do what you do.”  – Lance Gray

We were never out-prepared. Everything that he said, they did. And maybe a tinker here or there, but for the most part we were always well prepared and had a lot of meeting time and we were never left with any surprises.  – Ryan Held 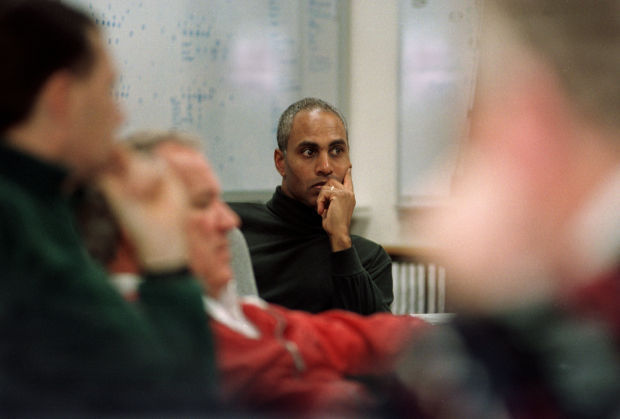 There was a weekly Defensive Backs test that we had to take. Darlington always handed them out on Friday after practice and we had to turn them in for the game.                   – David Alderman

Every meeting. It was kind of intimidating. Coach Osborne kind of grills you. When you watch film he’s not just gonna sit back, he’s pointing things out and he’s grilling you with questions and “What coverage is this…” and “Where are we long…,” and “Who’s the hot read…” and “What front is that…”, and “Do we audible?” It’s just over and over again. There was no real time to rest. Practice was physically demanding, but the film room was mentally demanding…

We knew going into these games that we were going to win. We just had to execute and do what we did in practice, study our films, take our tests. You know, we had to get 90 or 95% on our test each week for who we played, and we knew what we had to do.        – Darren Schmadeke

As a result, confidence effectively transferred to the field of play… 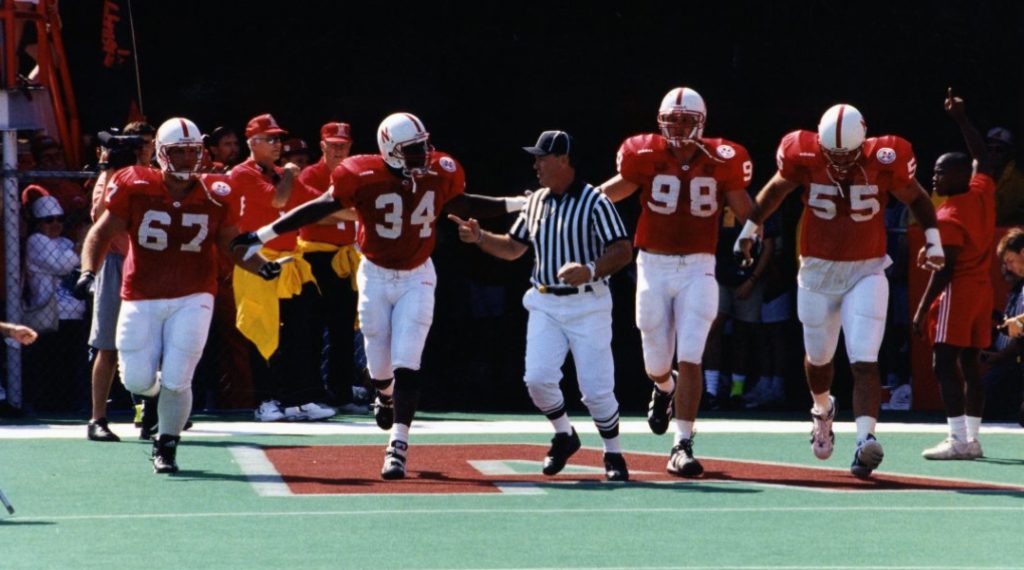 …they weren’t really cocky. But just the way they carried themselves, you knew they meant business out on the field. Other teams, you know they could feel it when they got in the trenches and our guys were just animals down there; it didn’t take long before there was some intimidation going on. But I don’t think they were cocky, they were very confident in what they were doing. The coaches coached them up and they believed everything they were being taught during practice, and it was coming straight from practices to the games and they were going 110 miles per hour. They played fast because they were confident and they knew what they were doing, which is a tribute to the coaches… – Mike Mason

Sometimes that preparation paid off immediately, even on the game’s very first snap of the ball…

…the first play of the game was that option pitch to me for a touchdown. Coach Osborne called it the night before. In our final team meeting the night before after we came back from the movie we had a final team meeting and we went over our first ten or fifteen plays like we usually did, he said, “This play right here is our first play of the game. If it’s blocked the way it should be blocked we’ll score a touchdown on the first play of the game.” And it was crazy. As I was returning to the sideline I was just shaking my head because, “This dude is something! I don’t know what it is about this guy, but he’s somebody special. He should put money down in Vegas.”…that was common. That was the crazy thing, he would call these plays and we’d go over the first fifteen. And every game -from the time I got there to the time I left- we would talk about it the night before and it would happen just the way he talked about it. The whole scenario would break down to, “This is the play we’ll use in this third and short situation. And if we don’t get a first down we’ll score a touchdown off of it.” It was textbook. And that right there in itself made us even play harder, because we’re being coached by a guy who knows what the heck is going on. So it was like, ‘Okay, I’m gonna do exactly what this guy tells me to do, because if I don’t it’s not going to happen.’ So we were like, “We’re gonna do everything he says.” – Ahman Green 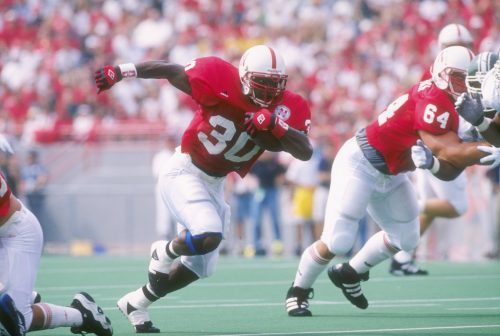 The preparation involved more than just football games, it also focused upon the game of life…

…everybody thinks it was all just about football, but it takes some time to realize that this guy wasn’t really preparing us for football, but he was preparing us for life in general outside of football… He was always just, “If you’re going to do it, do it right.” Everything was: “Do 100% of whatever your ability will allow you. But whatever your ability is, just help out the team.” – Jon Pederson

I see the same stubborn, pig-headed, I-know-what’s-best-and-I’m-just-gonna-do-my-thing kids (today), and I’m trying to work on different levels of personality with them. There’s a way to reach them, but I can’t reach them all with my personality. I have to figure out where they’re coming from. That’s the gift that I got, which was really what they were doing at Nebraska. They were trying. They were a class act and they wanted everyone to be a class act. That was Osborne’s gift to take a bunch of yahoos like we were and make us into a class act.    – Lance Gray

Even the Broadcaster was brought into the mix…

I would talk to coaches during the week I would talk to Milt (Tenopir) and I would talk to George (Darlington) and talk to Dan (Young), and our relationship was such that they trusted me implicitly. And on Monday or Tuesday they would tell me or give me all the information about the next opponent and their sets and plays and personnel, adjustments we were going to make offensively and defensively…they would tell me what plays they were going to run! They would give me their script! And I would know ahead of time the first couple series of plays.        -Kent Pavelka 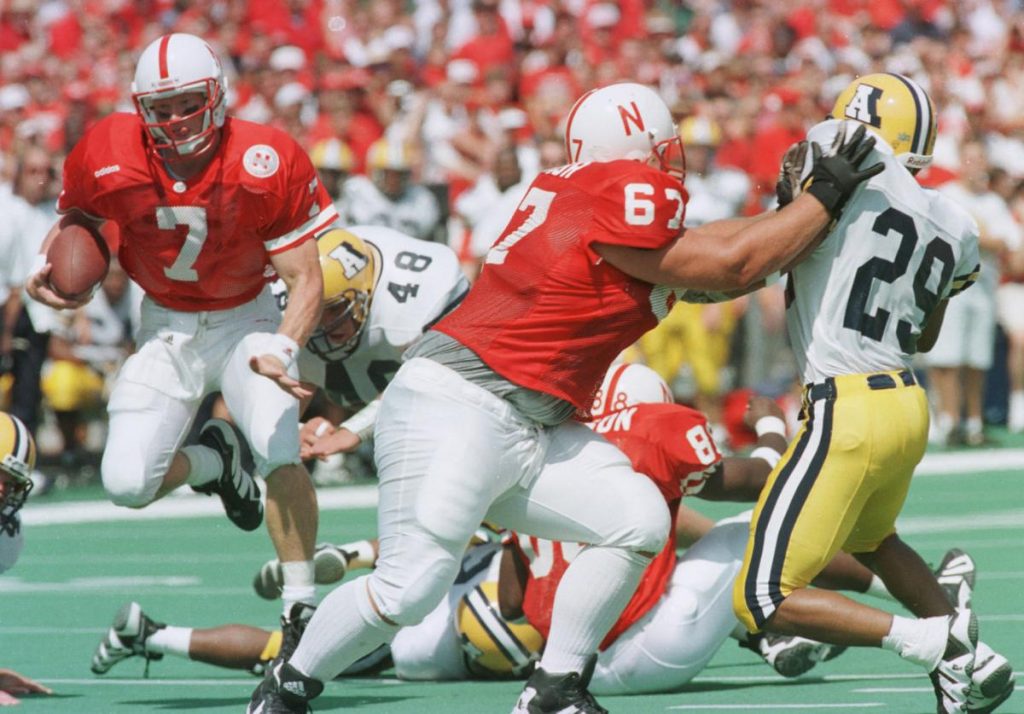 #67 Aaron Taylor: The tip of the spear

Taking into consideration what we’ve read thus far, the old saying of “They don’t care what you know until they know that you care” rings true. That the staff cared for the players was a given, and in conjunction with their preparatory skills the young men flourished by and large. It was a beautiful thing to behold, and the players’ trust in their leaders grew week by week with the resultant victories, blossoming into unquestioning faith and maximum efforts.