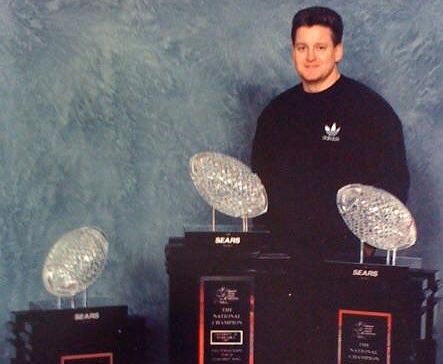 I hired Dave Ellis to be the nutritionist. I think he did a tremendous job giving Nebraska an advantage that they didn’t have prior to that.   – Boyd Epley

…another guy behind the scenes and kind of alongside a Bryan Bailey was Dave Ellis. With Dave, he had the knowledge of nutrition, you know, telling everyone exactly what we needed to eat and how to eat and how much to eat, what not to eat and stuff like that… the Big 12 came in and was basically saying we were ahead of the game. It wasn’t our fault, they were just behind us. It wasn’t our fault that Colorado and Kansas State, Florida, all these schools that we basically throttled, they were behind the 8-ball and we were ahead of them.    – Ahman Green 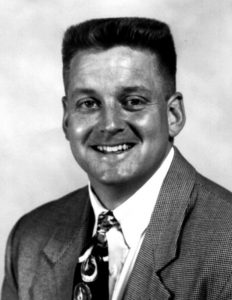 The average college student consumes about 34 gallons of alcohol per year, but Nutritionist Dave Ellis pushed enough water into the players on Thursdays and Fridays knowing they would be more than recovered for the Saturday contests.  – Paul Koch

Dave Ellis and I would travel out the day before the games and make sure everything was set up at the site as far as food and meeting rooms go. Make sure the meeting rooms were consistent, so everywhere we traveled to it was kind of the same in the meeting rooms far as the setup goes, so they’re not walking into a meeting room that was different every time. We’d tell the hotel how he wanted the food prepared or how the buffet line was to be set up.  – Curtis Thompson 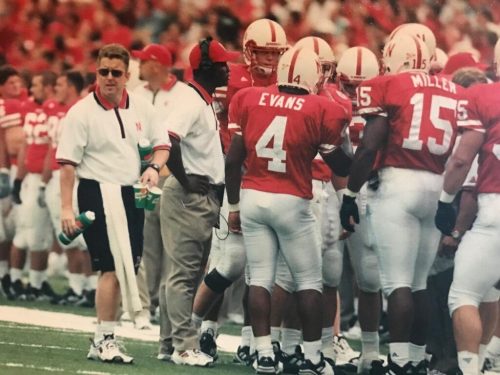 Another big deal for me, and I think people might take this for granted, too, was Dave Ellis. Just the food he brought in to us. You could correlate that with our winning, too. We always won, but eating right… Dave came in and we had tenderloin and a nice salad. We just ate right. (laughs) Something to give us fuel for the next day, you know? …I remember that first spread he put out. It was like, “Are you kidding me? We’ve been eating crap the whole time and we could have been eating this?!”    – Phil Ellis

…how can you narrow it down? That’s a pretty expansive question, there. I would say the lunch ladies, because they kept us fed. (laughs)… And then when nutritionist Dave Ellis came in, that guy was a professional…     – Jon Pederson 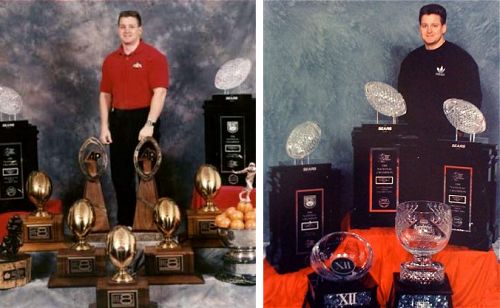 Dave Ellis: Engulfed by the spoils of his labors

Dave Ellis had this 4-wheeler, his wagon train, where he’d bring all his water and stuff out. Well, some guys would drink so much water that instead of going to the locker room he’d kind of fold those trunks up, so they’d kind of pee in there in this makeshift moat so the crowd wouldn’t see them. (laughs) Just little things where Ellis always had hot chicken broth and cocoa out there in those cold games.   – Curtis Thompson

Allowing the strength staff to tweak the program in mid-stream, he played a large part in tracking progress during the offseason through his…

…handling body composition assessment and tracking things over the long haul, setting some realistic goals for the athletes, monitoring their frame size and growth, figuring out how much weight they could carry, managing the training table, managing the travel feeding, supplementation, just creating a full-fledged support service… Tom once said, “Nutrition could make a 2, 3, even 4% difference in the highest levels of sport. Even a 1/2 % will make a difference.” – Dave Ellis 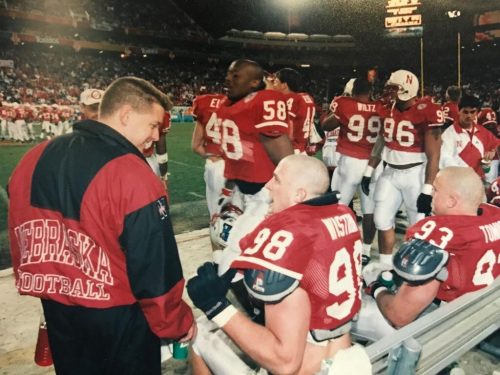 There were always a few bodies that needed his make-overs…

The marketing people all the way down to the trainers and weightroom, everybody played their role and they all contributed to our success… Buck Ellis, too, he probably loved the linemen because we were so out of shape. (laughs) We pretty much gave him job security. –Chris Dishman

Dave Ellis had a big impact as far as turning around everybody’s nutrition.     – Curt Thompson

There were many, many more staffers plying their trade behind the scenes, making the difference from so many angles and in so many ways. Even more than have been revealed here.