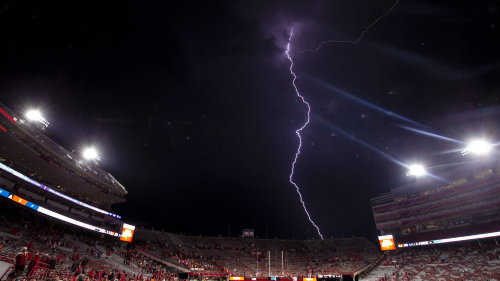 Nebraska Athletics
Lightning forced a halt to the game just after kickoff, then continued into the night.
By HuskerMax on 9/1/2018

After Akron’s opening kickoff went through the end zone, lightning caused a halt to the game and conditions only got worse. After more than two and a half hours, the game was called off. Then came a report from Fox TV that the game would be replayed Sunday morning. That turned out to be premature. The Huskers’ season opener will be Sept. 8 against Colorado.

Adjustments to the 2018 schedule, if any, will be announced at a later date, according to the university. Ticket holders are encouraged to hold on to their tickets from Saturday’s game.

Even with no game Saturday night, the atmosphere was energized by the anticipation of Scott Frost’s debut as head coach. There was a revamped Tunnel Walk, and former Husker great Ndamukong Suh was on hand.

And this is why there’s been a weather delay, and fans have been escorted to shelter locations. Stay safe. #lnk #newx

Thanks to @jeffbeavers13 for sharing this photo: “I was taking video during the lightning strike and then screen shot this from the video. Not photoshopped!” pic.twitter.com/WCdz4R8Q4q

• HuskerMax | Stryker: The season opener that provided no closure
• Omaha World-Herald* | Tom’s Takes: Canceling Husker game was right call, but why couldn’t it have been played earlier?
• Omaha World-Herald* | Chatelain: There was a buzz in the crowd at Memorial Stadium before the rain. Frost brought the stars
• Carriker Chronicles | Gut reaction to cancellation
• Lincoln Journal Star | Sipple: A night to remember on Stadium Drive, in its own unique and wet way
• Hail Varsity | A Good Tunnel Walk Spoiled
• Omaha World-Herald* | Shatel: Not even Scott Frost’s debut as Husker coach can beat Mother Nature

I will always remember the beginning. pic.twitter.com/BED7PpsLbc

We’ll all stick together, in all kinds of weather, for dear old Nebraska U! pic.twitter.com/m6W12rNfaP