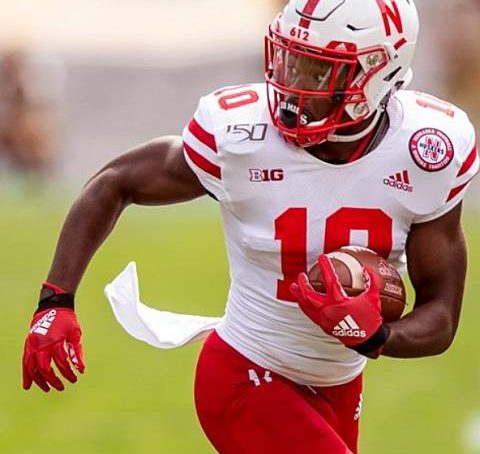 Courtesy of Huskers.com
JD Spielman
By HuskerMax on 9/7/2019

• Nebraska, playing an overtime game for the seventh consecutive season, fell to 8-6 all-time in overtime. The Huskers have lost their last five overtime games since winning at Iowa on Nov. 28, 2014.

• With 31 points, Nebraska scored 28 points or more in its eighth straight game against Colorado, including 27 or more points in nine straight visits to Folsom Field.

• Nebraska junior linebacker Will Honas had a career-high nine tackles in the game, bettering his eight-tackle effort last season against Troy.

• Martinez passed for 290 yards to increase his career total to 3,085, making him the 12th player in Nebraska history with 3,000 career passing yards.

• Nebraska junior receiver JD Spielman had a 65-yard touchdown reception to open the scoring. The touchdown marked his sixth career touchdown of 65 yards or more.

• Spielman caught five passes for 112 yards in the game, marking his fifth career 100-yard receiving game, tying him for fifth place on the NU career chart. Spielman has caught a pass in 23 straight games and has multiple receptions in all 23 of those games. He increased his career receiving yardage total to 1,796 to move past Terrence Nunn (1,762 yards) into sixth place on the NU career chart.

• The 96-yard touchdown drive on Nebraska’s first possession was the longest scoring drive on the opening drive under Scott Frost. The previous long was 81 yards last week and against Iowa in the regular-season finale in 2018. Five of Nebraska’s last six scoring drives on its opening possession have covered 75 yards or more.

• Nebraska’s trip to Boulder was its first since the 2009 regular-season finale, and its first in the stadium of a former Big 12 opponent since leaving the conference prior to the 2011 season.