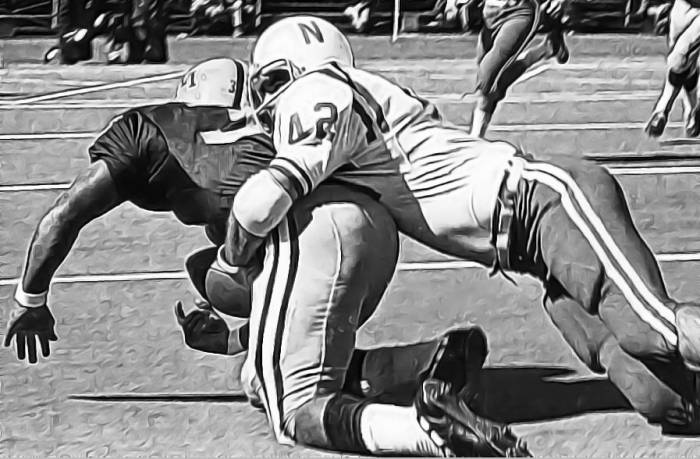 Southern Cal thumped Nebraska 31-21 in last year’s season opener in Lincoln. It was a game that perhaps irked the Cornhuskers more than any other.

As All-Big Eight linebacker Jerry Murtaugh said a few weeks ago, “They got the jump on us last year. I think this year we’ll beat the hell out of ’em.”

Jerry Murtaugh, Nebraska’s all-league linebacker, believes the Huskers’ pass rush “shook up” Lynn Dickey in last year’s 10-7 victory over K-State. “We put a rush on Dickey, and he kinda got shook back there,” Murtaugh says. “He was back there scrambling, and it threw him off.”

From Howard Brantz’s column of Sept. 6, 1970, column in the Omaha World-Herald:

There was an interesting story making the rounds during the skywriters’ stopover at Lincoln.

The story, unconfirmed so far (but we’re watching the Big Eight papers closely) goes like this:

Husker linebacker Jerry Murtaugh was asked what he thought of Kansas State’s chances in the Big Eight. Jerry reportedly replied: “I don’t think they are so hot because Lyunn Dickey isn’t as good when he has the pressure on him.”

About that time Jeff Kinney, a good listener, joined Murtaugh for a golf cart ride back to the other end of the field where the television boys were cutting tapes.

Jeff is said to have told Murtaugh: “Jerry, no more remarks like that. When we get up there, you just look pretty and let me do the talking.”

Everybody in Husker land will deny the conversation ever took place. And if it did, that might just put an end to player interviews at N.U.